If Mo Farah wins the 5,000 metres tonight in Moscow he will have completed the 'double, double', winning gold medals in both the 5,000 and 10,000 metres at the Olympics and the World Championships.

Earlier this week Farah became the first British man to win a world title in the 10,000 metres but does that put him on the path to athletic glory? Some of the most famous British athletes have spoken to The Telegraph to have their say:

No. In my career, two things mattered; Olympic gold and world records. As yet Mo has not done super-fast times in the 5,000 or 10,000 metres, which is not, of course, to say he will not. The greatest? I would say Seb Coe or Daley Thompson, but Mo is still young!

Yes. No arguments. He would be ahead of all of us with five global golds, a fantastic achievement. He is in that special form where everyone else, whether they admit it or not, is running for second. I always say Daley is No 1 because he is my mate, but Mo would take his title.

A very tough call, which depends on the criteria. No, because he has not come close to a world record, but on his championship record - an Olympic and world double in a competitive era is incredibly special - then he would have a very, very good shout.

No. Because he already is! He ranks alongside Daley Thompson and Seb Coe. He is also on a podium with Haile Gebrselassie, Kenenisa Bekele and Lasse Viren as the greatest distance runner of all time. The best thing? He has got time to surpass them all.

Farah took to Twitter ahead of the race, posting this picture: 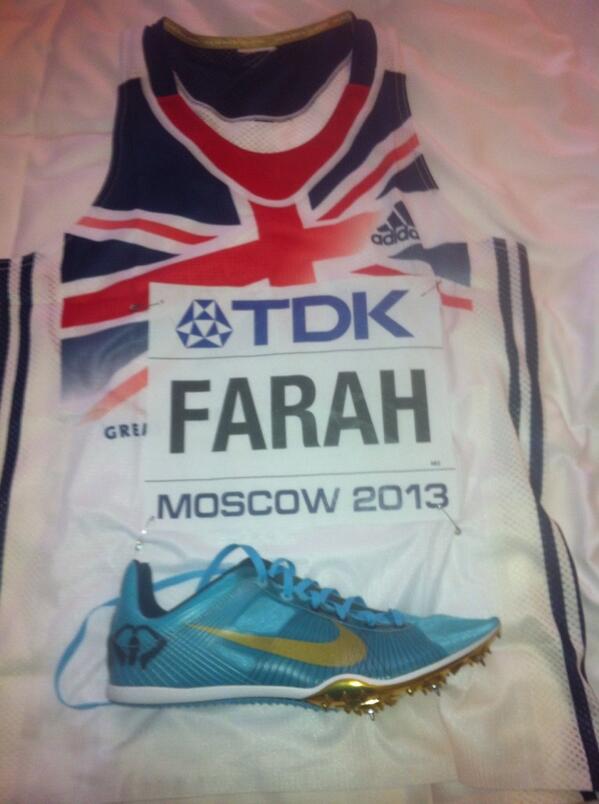 There has been mixed reaction on social media to whether Farah could be the greatest athlete. There were generally positive views on Twitter:

While on the ITV News Facebook page, some readers disagreed:

Greatest uk athlete of all time ? Sorry hes a great athlete ....but hes won a few big races. How does that put on par with coe ? ovet ? Thompson? Brian jacks? the cycling guy ? Its takes years to be the best of all time. Not just a few top races.

In The Guardian Barry Fudge who looks after Farah at the major championships says completing the 'double, double' will be harder in Moscow than in London 2012 because he has less time to recover during finals.

At the Olympics there were 7 days between events whereas at the World Championships there are only 6.

His opponents are going to go hard and he's done a 10km and a 5km already.

As much as anything it's the damage to the legs from the Mondo track. It's incredibly hard. It is a long shot when you're doubling up. You don't know how your body's going to respond. You do all the training, all the prep, but the human body is one of those things. You just hope that it will be all right.