The number of people calling 999 with breathing difficulties has spiked in parts of the UK as pollution levels reached record highs.

In London - which has seen 'very high' levels since Wednesday - emergency services saw a 14% rise in such complaints yesterday and higher volumes today.

Dr Fenella Wrigley from the London Ambulance Service has witnessed a "definite increase" in such issues:

It wasn't simply felt in the capital, however - ambulance services in the West Midlands, East of England and north-west also reported a surge in calls thought to be related to the smog.

This week I'm having to use my inhales a dozen times whereas usually I'm only using them twice a day.

Every time I go outside the backdoor I have to use my inhaler.

Atmospheric pollution is determined by the concentration of pollutants in the area, such as Ozone, Sulphur Dioxide, Nitrogen Dioxide and tiny specks of matter called particulates.

Especially hazardous are the smaller particulates called PM2.5, which are 100 times thinner than a human hair.

Pollution levels remained high across England and South Wales in the evening on Thursday, as this graphic from the Department for Environment, Food and Rural Affairs shows. 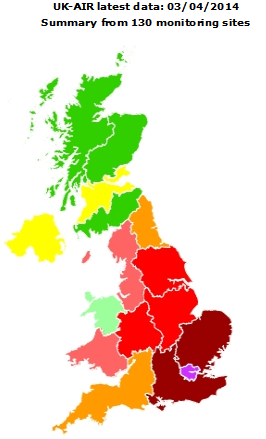 However, it is expected to clear overnight as cleaner, fresher south-westerly winds blow in - which should ensure a respite for those who have been suffering.

Read: Sharp rise in 999 calls as parts of the UK are covered in smog