The annual Oscar nominee luncheon brings together contenders from all categories for a "class photo" before the live Oscar broadcast on February 22.

Eddie Redmayne, who is up for Best Actor for his portrayal of Stephen Hawking in The Theory of Everything, has already collected a Screen Actors Guild Award and a Golden Globe for his performance.

Redmayne told a story that elicited chuckles from the audience about the time a bag containing his Golden Globe went through airport security.

I did that thing where I went through and saw the bag going through and I saw the woman stop the thing and then go close up on this weird shaped thing and say, 'I think it's an award or something.'

And I was praying they would make me open it up - and they did!

Notably absent from the festivities was Benedict Cumberbatch, also a Best Actor nominee for his portrayal of Alan Turing in The Imitation Game.

Redmayne's co-star Felicity Jones, who plays Jane Hawking in the film, is nominated for Best Actress, but said at the event that the journey to the Oscars had overwhelmed her at times.

Jones will compete with fellow British actress Rosamund Pike for the prize. Pike is nominated for her turn as Amy Dunne in the big screen adaptation of Gillian Flynn's hit novel Gone Girl.

The British pair are joined in the best actress category by Still Alice star Julianne Moore, Reese Witherspoon for her performance as Cheryl Strayed in Wild and Marion Cotillard for Two Days, One Night.

The Academy Awards will be presented at the Dolby Theatre in Hollywood on February 22. 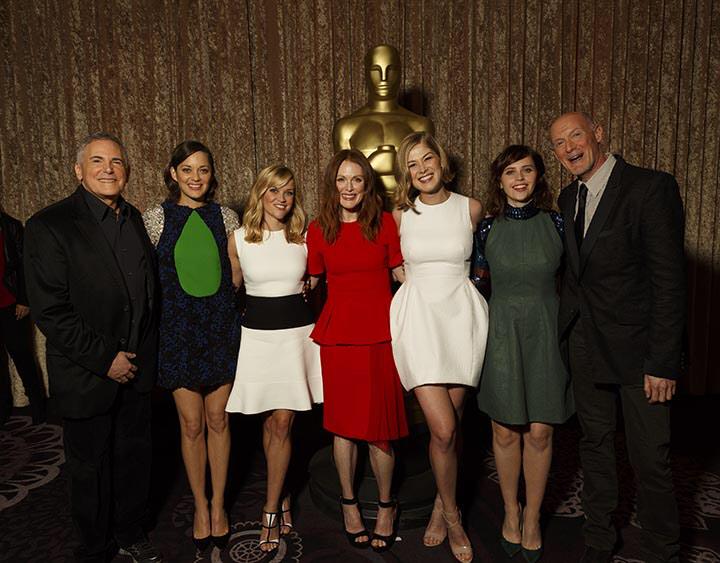