Fifty Shades Of Grey author EL James was met with awkward questions on consent and abuse as a Twitter Q&A went badly wrong.

James had enthusiastically advertised the live Q&A ahead of time, however critics responded with even more zeal.

Mon 29 Jun at 6pm UK time, @e_l_james will be doing a live chat with @twitterbooks. Use #AskELJames to ask a question http://t.co/Ixu9fPo31v 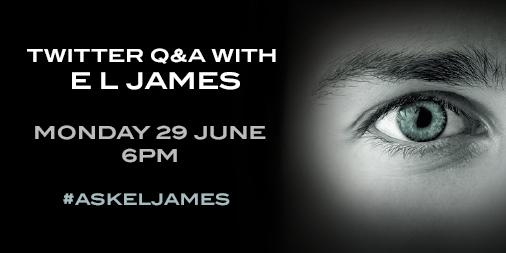 Some of the tweets simply accused James of being a bad author.

#AskELJames after the success of "Grey," have you considered re-telling the story from the perspective of someone who can write

#AskELJames Is there a safe word we can use to get you to stop writing such drivel?

Which do you hate more, women or the English language? #AskELJames

My boss said no when I asked if I could kiss him and then I did anyway because no means yes right? Things at work are awkward. #AskELJames

#AskELJames I need advice on making a BIG romantic gesture. Should I put a GPS tracker in her phone and make threats if she tries to leave?

how do you feel knowing you've made your riches from convincing young impressionable girls that abuse is 'love'? #AskELJames

#AskELJames what's it like telling millions of women it's okay to be in an abusive relationship as long as he's rich. Asking for a friend.

#AskELJames Is it only ok for Christian to stalk, coerce, threaten & manipulate Ana because he's hot, or is it also ok because he's rich?

#AskELJames If your sons behaved like Christian Grey does towards women, would you be okay with that? If so, WHY?!

One reader even asked if she would be writing a book based on one of the most hated Game Of Thrones characters, whose explicit and abusive story lines have led to complaints.

#AskELJames Can you confirm that you will be writing the story of Ramsay Bolton from his perspective, showing he is just misunderstood?

Others made reference to how the books began - as fan fiction developed after Stephanie Meyer's hit with the Twilight series.

Will there be a delay to our answers while you wait for Stephanie Meyer to answer them first, so you know what to write? #AskELJames

After all the flak, even Ricky Gervais was concerned for James' publicity team.

James responded with good humour despite the barbs - though did not reply directly to any of her critics.

Off to meet the competition winners, now. Thanks so much for an interesting hour... :D