The international community has been quick to condemn North Korea's claims that it has tested a "miniaturised" hydrogen bomb.

It's likely that the United Nations may consider further sanctions upon the hermit kingdom and China will put more pressure on its Supreme Leader Kim Jong-un to stop his nuclear arms race.

But why is this latest development in the isolated nation's quest for nuclear power seen as potentially significant?

H-bomb vs A-bomb: What's the difference?

Nuclear fusion, the main principle behind the hydrogen bomb, can be many hundreds of times more powerful than atomic weapons that use fission.

In a hydrogen bomb, radiation from a nuclear fission explosion sets off the fusion reaction responsible for an intensely powerful blast and radioactivity.

It is technically much more difficult to build hydrogen bombs.

Why does it matter?

Thermonuclear weapons would be a huge technological leap for North Korea, but it is unlikely to spark a war with neighbouring South Korea.

Whilst North Korea has technically been a nuclear state since around 2006, it still lacks the ability to effectively deliver a weapon by missile.

In early 2015, Pyongyang test-fired an underwater-launched ballistic missile, leading some to believe the country could be attempting to develop a submarine first-strike nuclear capability.

Why are they trying to make a H-Bomb?

Because they are comparatively lighter, H-bombs can be mounted easily as warheads on missiles, making them a much more desirable weapon for nation states.

H-bombs have a much higher yield than A-bombs, too.

"Fat Man", the plutonium a-bomb that destroyed the Japanese city of Nagasaki in 1945 had a yield of 21 kilotons, causing devastation and killing 100,000 within its 2.2km (1.3 miles) blast range. 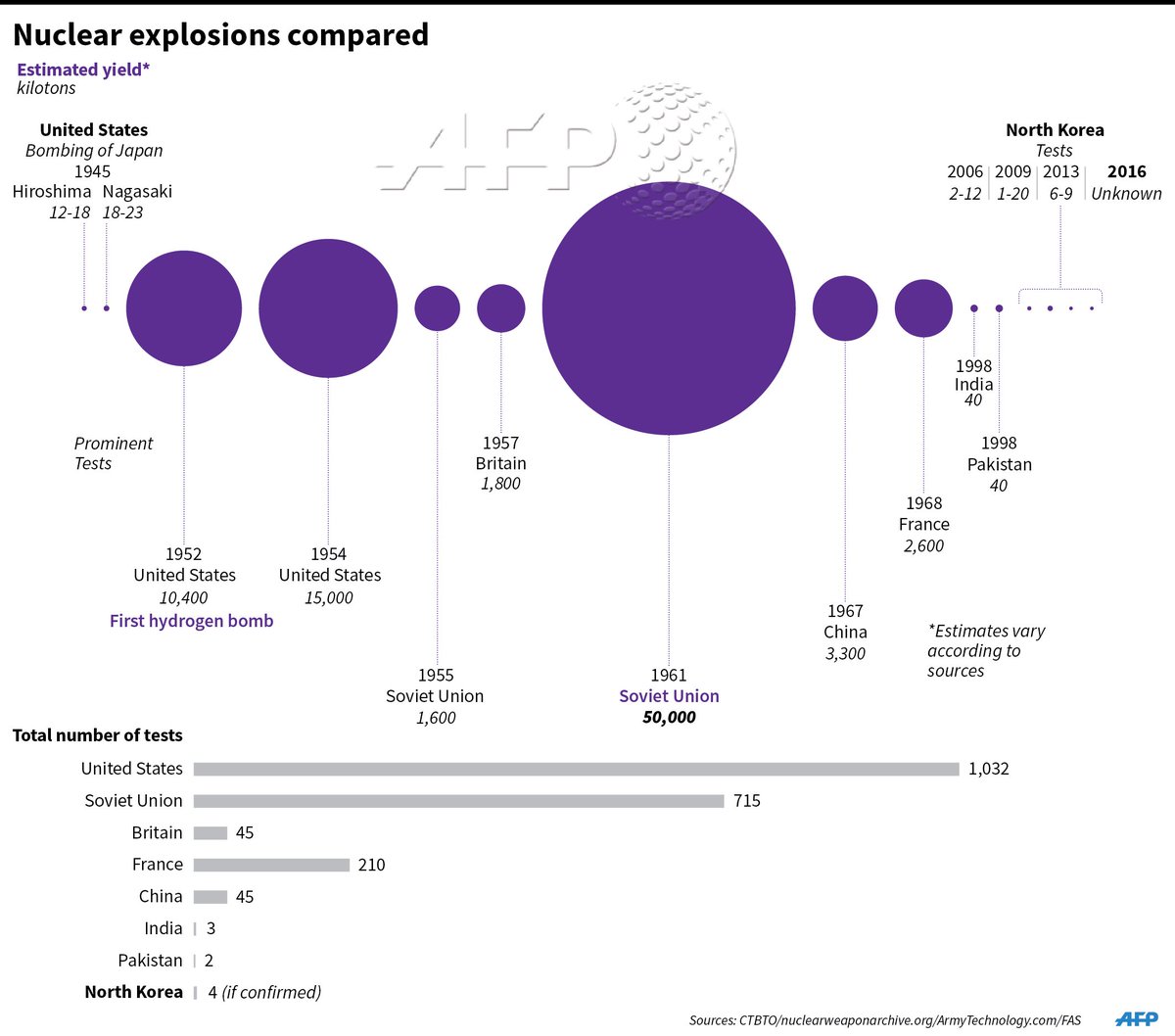 By comparison, a modern H-bomb like that in a Trident missile warhead has a 455kt yield - which if detonated above Buckingham Palace in central London would kill 685,000 people and maim almost two million, causing catastrophic damage throughout an 8.62km (five miles) radius.

1kt
One kiloton is an explosive force equal to around 1,000 metric tons of TNT.

How powerful is the latest North Korea test?

Experts have used seismic data recorded during the test to calculate that the test device was between 6 - 12 kilotons, making it a relatively small weapon.

This had led to the South Korean military suggesting that the weapon isn't a H-bomb at all.

Whilst tiny when compared alongside giant warheads in the US or Russia's nuclear arsenal, a weapon of this size would still devastate a densely populated city like Seoul in South Korea or Tokyo in Japan.

How likely is it that North Korean now has a H-bomb?

Writing in December, after North Korean leader Kim Jong Un bragged of H-bomb capabilities, nuclear expert Jeffrey Lewis noted that building such a bomb "would seem to be a bit of a stretch for the North Koreans".

But he wrote on the North Korea-focused 38 North website:

The North has now had a nuclear weapons programme for more than 20 years.

North Korean nuclear scientists have access to their counterparts in Pakistan, possibly Iran and maybe a few other places.

We should not expect that they will test the same fission device over and over again.

Francois Heisbourg, a special adviser at the Paris-based Foundation for Strategic Research, told NBC News that he'd be "very surprised" if the test involved a true H-bomb.

"It could be what is called a boosted device — halfway between an ordinary Hiroshima or Nagasaki-type atomic weapon and an H-bomb," he added.

One expert in South Korea also insisted the reported 5.1 magnitude of the quake set off by Wednesday's test was probably too small to be an H-bomb test.

Emil Dall, from the Royal United Services Institute told ITV News that it could take weeks for the rest of the world to confirm whether or not North Korea now has a hydrogen bomb.