Major Tim Peake has said his "exhilarating" spacewalk will be "etched in my memory forever" after he became the first British astronaut to walk in space.

He said leaving the International Space Station to repair a broken power unit 250 miles above Earth was "quite an incredible feeling".

Major Peake and fellow astronaut Tim Kopra put on their spacesuits shortly before 1pm GMT before safely concluding the walk around 5.30pm.

The walk ended two hours earlier than scheduled due to a "small amount of water in Kopra's helmet" and was terminated as a "precaution", Nasa said.

The ISS said the walk's major task had been accomplished and the astronauts both offered their thanks to ground support as they returned to the space centre.

"Thank you very much," Major Peake said. "You guys have done a great job. Thanks for everybody's support."

He later tweeted images of his spacewalk, including his 'out of this world' selfie and thanked the ground teams.

Wrapping up today's spacewalk activities. Huge thanks to the ground teams who make it all possible & keep us safe out there - you guys rock!

Major Peake and Colonel Kopra had to wait in the airlock for the pressure to be reduced to almost a vacuum - equal to the pressure in space - before opening the outer hatch and stepping out into the void.

The moment was broadcast live showing Major Peake emerging from the space station into the darkness of space.

As he emerged, his colleague Scott Kelly - who was left behind on the station - said it was "really cool" to see the Union flag outside on the Briton's spacesuit.

Major Peake said: "It's great to be wearing it. A privilege, a proud moment."

One of the aims of the space walk was to repair a broken power unit.

At the start of the walk, the International Space Station made what is known as a "night pass", meaning it was shielded from the sun.

This gives the astronauts time to remove the power unit while the station's solar panels are in shadow and not generating any electricity.

The spacewalk - which Nasa terms an Extra-Vehicular Activity (EVA) - was scheduled to last almost six-and-a-half hours before ending early because of the water in Colonel Kopra's helmet.

As a precaution, #spacewalk terminated due to small amount of water in @astro_tim's helmet. https://t.co/KX5g7zfYQe https://t.co/6sRiiiLFPo

The ISS confirmed the walk officially ended at 5.31pm BST when the spacewalkers returned safely back inside the space centre. 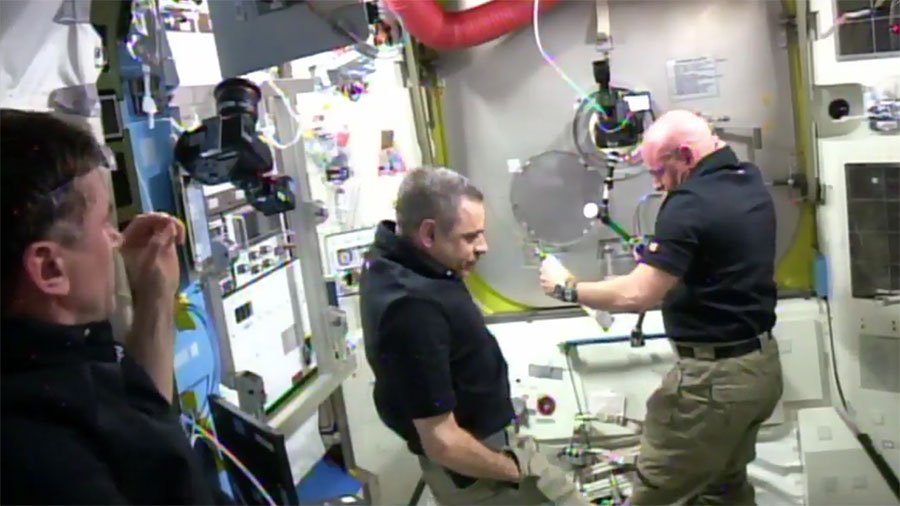 During the second half of the walk, the pair had been due to lay cables for new docking ports and reinstall a valve that was removed last year.

The ISS later said the major task of the walk had been "accomplished" despite the flight director calling it off early.

Colonel Kopra's helmet-absorption pad, along with a sample of the water bubble taken with a syringe, will be analysed, Nasa said.

On leaving the space station, Major Peake was led by his Nasa colleague Colonel Tim Kopra, 52.

The two have spent weeks preparing, working through a timeline of the spacewalk that is almost 40 pages long.

They were pictured arranging their tools and getting into the airlock ahead of the career-defining moment.

"A spacewalk is a test of patience and alertness," the ESA warned.

The astronauts also took time out to take an 'out of this world' selfie as they began their walk 250 miles above Earth.

But first, let me take a #selfie. Astronauts pause for a selfie during #spacewalk. Watch: https://t.co/0Pr5m1bEAZ https://t.co/AF4pskYOLJ 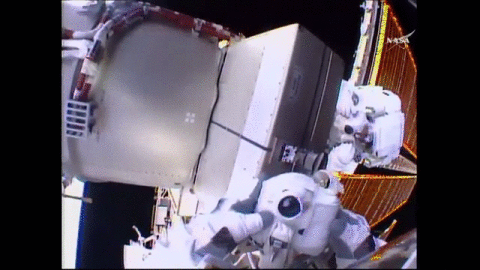 There was a minor hiccup when part of Major Peake's safety tether appeared to be snagged, but it was quickly corrected.

Major Peake and Colonel Kopra successfully replaced the broken regulator box with a spare power unit, nicknamed "Dusty", which arrived at the ISS in 1999.

Buzz Aldrin, the second man on the Moon, was among those offering congratulations after the successful spacewalk, while poking fun at Colonel Kopra for his water mishap.

Bravo @astro_timpeake on your first 1st spacewalk! Hey @astro_tim I used water for training rather than in my suit. Be safe guys!

Major Peake had received words of encouragement ahead of the walk from fellow astronaut Chris Hadfield.

On Twitter, the Canadian astronaut said: "See the world for us, Tim."

Good luck to @astro_timpeake on today's space walk. The country will be watching you make history #spacewalk

Good luck @astro_timpeake we're all watching, no pressure! Wishing you a happy stroll outdoors in the universe. All the best, PMc #spacewalk