Morrisons has been caught up in a row after a casting company asked for actors for a new "Morrisons" advert - but specified "nobody from Liverpool please".

Angry customers took to Twitter to accuse the Yorkshire-based supermarket chain of discriminating against people in the North West over the posting by Casting Networks International.

The advert also called for applicants with northern accents, who are "warm and likeable" and said "we don’t want caricatures".

These films will focus largely on people’s facial expressions. There it’s vital that their faces have character - something interesting and captivating that will make the film watchable.

But nothing glaringly obvious, and we don’t want caricatures. We want quirks: freckles, bushy eyebrows etc. They should all be warm and likeable.

They should be proper working class people, but not at all like the characters from ‘Benefits Street’. They should NOT sound or look posh, and we should skew towards northern accents.

And nobody from Liverpool please.

Morrisons denied Casting Networks International looks after its adverts and said the ad has been issued without their permission.

A spokesman told ITV News: "We are angry and we apologise that a third party has published a statement using our name without our knowledge.

"Everyone is welcome at Morrisons and we work really hard to ensure our marketing represents the whole of the nation."

Will never ever ever shop at @morrisons ever again! They don't want Scousers in there TV adds. Sick predjudice https://t.co/7PvTONM91h 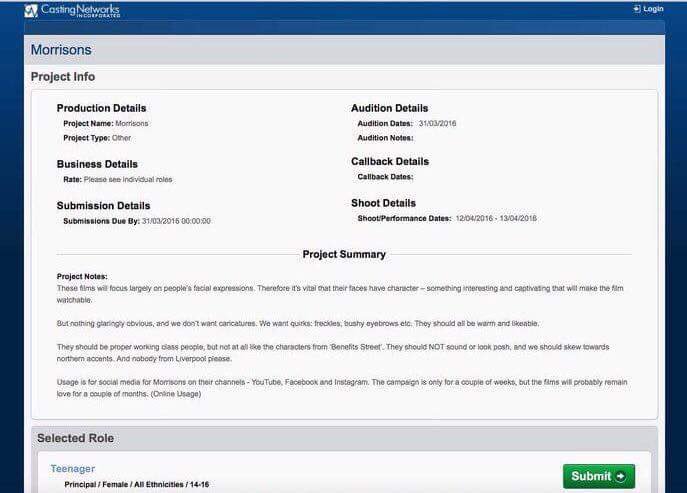 The advert has since been withdrawn from Casting Networks International's website and the firm issued a statement denying it had "verified" the ad.

"We are not the authors of these postings, nor are we an agency," CEO Glenn Ward told Buzzfeed. "The unfortunate views expressed in this instance are not what CNI stands for."