The Sun newspaper has kept the findings of the Hillsborough inquests off its front page today, sparking angry criticism online.

Four days after the 1989 disaster, The Sun ran a front page story falsely accusing fans of pick-pocketing victims, urinating on police officers and beating an officer while he was helping a victim, under a headline proclaiming to tell "The Truth."

The paper has largely been boycotted on Merseyside ever since.

It finally addressed the slurs four years ago when it ran a front page clarification headlined "The Real Truth" in which it said it was "profoundly sorry for false reports."

Today its front page story was the news that David Cameron is using WhatsApp to discuss the EU. The unlawful killing of 96 people was covered on pages 8 and 9.

Gary Lineker, Rory Bremner, Stephen Mangan and Krishnan Guru-Murthy were among the high-profile names to criticise the paper for leaving the Hillsborough rulings off its cover.

Impressionist and comedian Bremner tweeted that the relegation of the story to pages eight and nine was "extraordinary".

As disgusting as it is unsurprising. They have no shame. https://t.co/qKnngxoynh

That's a v depressing shock. The one-time paper of record sides with The Sun on Hillsborough. https://t.co/F2Ny4JoxrR

The leader within it states that after 27 years, the "Hillsborough families finally have their first measure of justice".

...The supporters were not to blame. But the police smeared them with a pack of lies which in 1989 The Sun and others in the media swallowed whole.

We apologised prominently 12 years ago, again four years ago on the front page, and do so unreservedly again now.

Further, we pay tribute to the admirable tenacity of the friends and relatives over so many years on behalf of the 96 who died.

The Sun and The Times, both owned by Rupert Murdoch's News Corp., were the only major British newspapers not to give front page coverage to the verdict of the two-year inquests, which cleared the fans of any fault.

The Times later added a picture of the Hillsborough victims' families to its second edition.

The newspaper said it "made a mistake" with the front page of its first edition today which did not include any coverage of the Hillsborough inquests, adding that "we fixed it for the second edition".

We've been criticised today for not having Hillsborough on our first edition front page. This is our response: https://t.co/GNhBN6g3S1 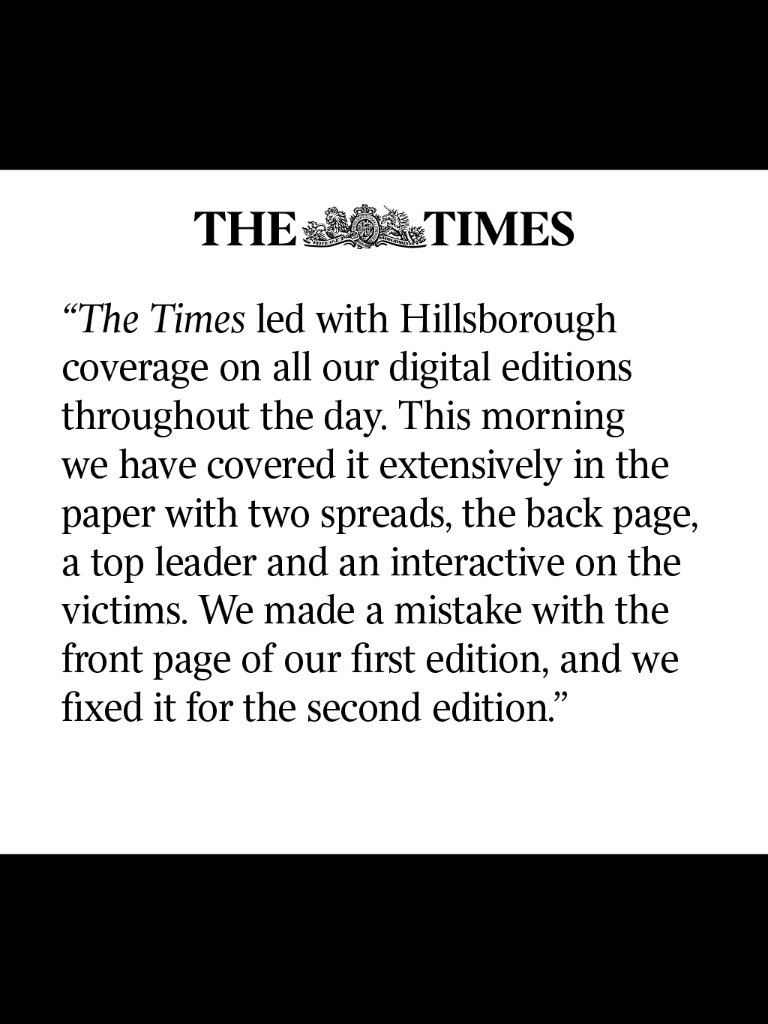 On Tuesday former editor of The Sun Kelvin MacKenzie, who oversaw the story published in 1989 blaming fans, apologised for the "hurt" the story caused.

Speaking on Sky News' press preview, The Sun's political editor, Tom Newton Dunn said the police are at the "core" of the whole story and the paper were misled by them.

He said if people are still angry over the 1989 front page he "completely understands", adding: "We deserve everything that is thrown our way."