"Boaty McBoatface" was by far the most popular choice in a competition to name a new polar research ship, but the government has confirmed it has rejected the moniker.

Instead, the £200 million vessel will be named RRS Sir David Attenborough, in honour of the veteran naturalist and broadcaster, days before his 90th birthday.

Attenborough said he is "truly honoured" by the decision.

I am truly honoured by this naming decision and hope that everyone who suggested a name will feel just as inspired to follow the ship’s progress as it explores our polar regions.

I have been privileged to explore the world’s deepest oceans alongside amazing teams of researchers, and with this new polar research ship they will be able to go further and discover more than ever before.

Some 124,109 votes were cast to name the vessel Boaty McBoatface in the competition launched by the Natural Environment Research Council.

The name gained traction when the #NameOurShip campaign was launched in March on social media.

Universities and Science Minister Jo Johnson, who had final say over the name, confirmed the "difficult" decision today.

The public provided some truly inspirational and creative names, and while it was a difficult decision I’m delighted that our state-of-the-art polar research ship will be named after one of the nation’s most cherished broadcasters and natural scientists.

This vessel will carry the Attenborough name for decades to come, as it fulfils its mission to explore the oceans and put Britain at the forefront of efforts to preserve our precious marine environment.

Those attached to "Boaty" can take consolation from the name living on through a yellow submarine.

The name will adorn a remote-control sub-sea vehicle that will support the research crew.

We are excited to announce that #BoatyMcBoatface will live on as a high-tech remotely operated undersea vehicle https://t.co/05aTaxGEgm

Boaty McBoatface was first suggested by former BBC radio presenter James Hand, who has since apologised and said the storm it created had "legs of its own."

He said that while he stands by Boaty McBoatface as a "brilliant name" for a boat, he actually voted for RRS David Attenborough to be the new name.

The ship, which is being built in Merseyside, will set sail in 2019. 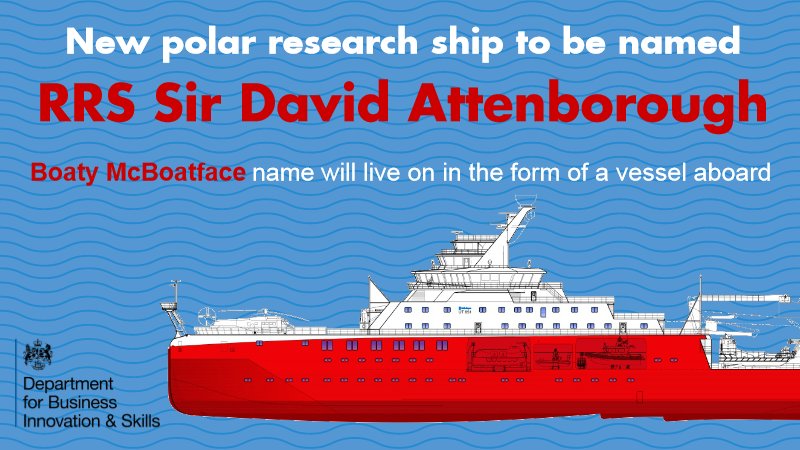