Two teenagers have died in separate incidents at the T in the Park festival in Scotland.

Police confirmed that a boy from west Scotland and a girl from north England, both of whom were aged 17, had died at the festival.

The deaths are thought to be unrelated and are not being treated as suspicious, Police Scotland said in a statement.

Detectives suspect one or both may be drug-related, said Chief Superintendent Angela McLaren, who was the main police commander for the music festival.

Our thoughts and condolences are with the families of the two young people involved.

We are continuing to investigate these deaths and are following lines of enquiry, including the possibility that they may be drug related.

I would remind all persons attending the festival that there is no safe way of taking drugs.

Anyone who has any concerns for themselves or others at the festival should contact festival staff, police officers or medics for assistance.

"We are shocked and saddened by today's news and our thoughts are with the families and friends at this time," he said.

"We are offering our full support and assistance." 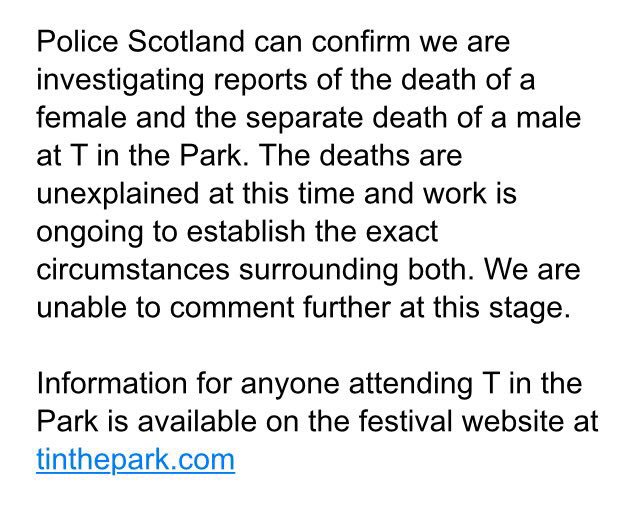 Tens of thousands of revellers head to the festival each year - though this is only the second time it has been held at Strathallan Castle in Perthshire, having moved from Balado in Kinross-shire last year.

Jamie XX, Disclosure and Courteeners are all due to perform today, with The Stone Roses headlining.

Calvin Harris and the Red Hot Chili Peppers will headline tomorrow and Sunday.