Hundreds have complained about The Sun columnist Kelvin MacKenzie's article criticising Channel 4 News for allowing a hijab-wearing journalist to present a report on the Nice massacre.

Stating that he could "hardly believe my eyes" when he saw Fatima Manji presenting, MacKenzie asked in his Monday column: "Was it appropriate for her to be on camera when there had been yet another shocking slaughter by a Muslim?"

The column sparked outrage, with Channel 4 News accusing MacKenzie, a former editor of The Sun, of "inciting religious and even racial hatred". 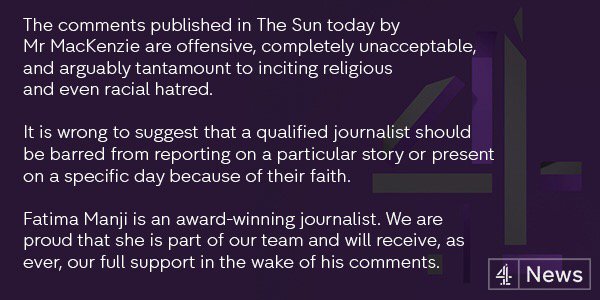 The Independent Press Standards Organisation (Ipso) said it had received more than 300 complaints, which still have to be assessed, related to accuracy, harassment and discrimination.

A spokesman for The Sun said it was making "no comment" on the issue.