A historic space probe to Mars has touched down on the red planet, the European Space Agency (ESA) has confirmed.

The Schiaparelli probe successfully separated from the Trace Gas Orbiter (TGO) spacecraft which had carried it to Mars and then descended to the surface of the planet.

But scientists are still waiting to see whether it is fully working after the landing.

It marks Europe's first attempt to land a probe on the planet since the the Beagle 2's "heroic failure" more than a decade ago.

The Schiaparelli lander went through "six minutes of terror" it descended through the Martian atmosphere to the surface.

But the mission's operators say its fate may not be known until tomorrow morning after its signal was lost.

"It is clear these are not good signs," admitted Paolo Ferri, ESA head of missions operations.

When you catch signals from a spacecraft at an alien planet, there's a lot of happy activity! #ExoMars https://t.co/COy1NDlNGK 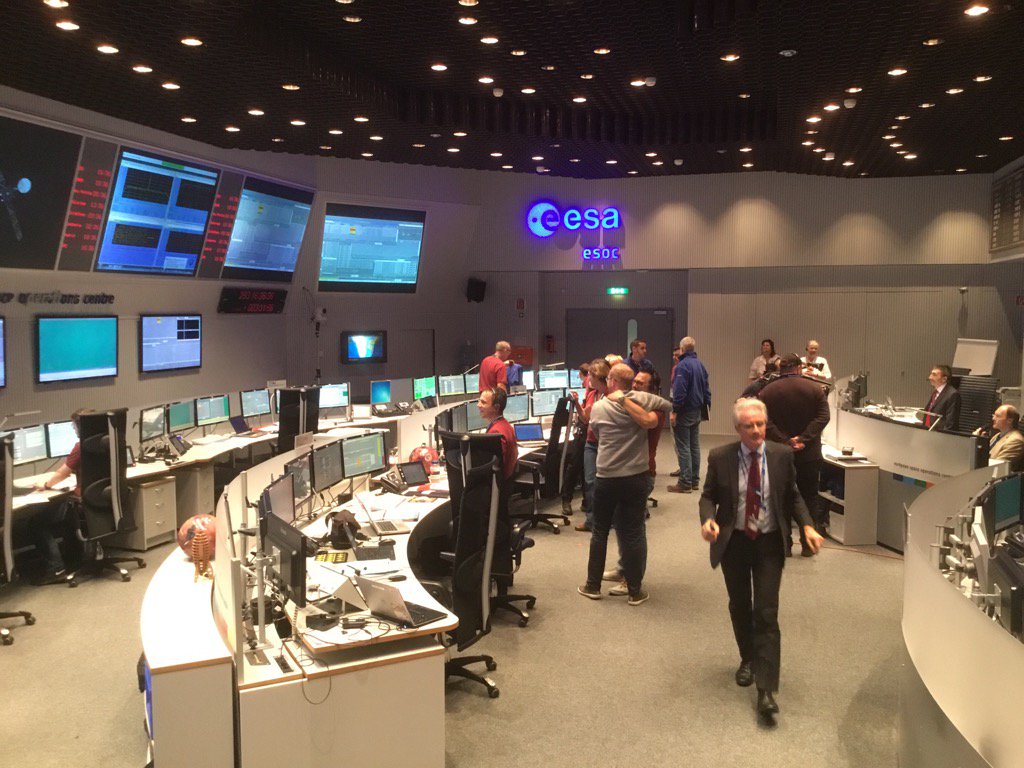 Acquisition of signal! @esaoperations hears @esa_tgo's signal loud & clear after it emerges from behind #Mars… https://t.co/reK8WSZZZ9

The ESA team also announced that the TGO is sending signals back to earth in a potentially groundbreaking research mission.

Scientists said they heard from the spacecraft it "loud and clear" after it emerged from radio darkness "behind Mars".

The mission is largely a proof of technology which is testing out a landing system for future missions to the Red Planet - including the ExoMars Rover mission in 2020.

The Rover will drill into the soil of Mars and look for definitive signs of past or present life.

The only previous ESA spacecraft to attempt a landing on the planet was British-built Beagle 2 on Christmas Day 2003.

However after separating from the Mars Express orbiter that carried it, Beagle 2 was never heard from again.

Twelve years later scientists discovered the Beagle had landed, but its solar panels had failed to deploy.

Mission controllers hope Schiaparelli - part of an ambitious joint European and Russian space effort - will fare better and took photographs as it descended onto the planet's surface.

It's certainly a tense time.

I'm looking forward to an interesting night's sleep, or lack of it. The classic problem with Mars is its thin atmosphere.

If you have a thick atmosphere, it naturally slows you down, and if there's no atmosphere, it's easy. But Mars has a very thin atmosphere that slows you down a bit, but can still cause a lot of problems. It varies a lot; you get waves and ripples which are unpredictable.

Dust impacting on the heat shield can also be a hazard, but I'm told that's one that can be compensated for.

Schiaparelli was taken to Mars on the ExoMars Trace Gas Orbiter (TGO) spacecraft, and crossed a distance of 500 million km on its seven-month journey from Earth.