The Government must get Parliament's approval to launch Article 50 of the Lisbon Treaty and formally begin the Brexit process, the Supreme Court has ruled.

The decision by Britain's most senior judges by a vote of eight to three ends one of the biggest constitutional cases in British legal history.

The ruling is not expected to impact the UK's move to leave the European Union, with MPs highly unlikely to block a Brexit bill after last year's majority referendum result.

Responding to the ruling, a Downing Street spokesman said: "The British people voted to leave the EU, and the Government will deliver on their verdict - triggering Article 50, as planned, by the end of March. Today's ruling does nothing to change that."

Gina Miller, the lead claimant in the Brexit challenge, welcomed the ruling outside the central London court.

"No prime minister (and) no government can expect to be unanswerable or unchallenged. Parliament alone is sovereign," she said, adding that MPs will now have the chance to help the Government select the "best course" in Brexit talks.

The investment manager, who along with hairdresser Deir Dos Santos led a wide-ranging group of anti-Article 50 campaigners, said the "divisive issue of a generation" had led to her and her legal team facing "extraordinary and unwarranted criticism".

The Government was boosted by the justices unanimously ruling there was no need to consult with the devolved powers in Scotland, Wales and Northern Ireland - which could have delayed the Brexit timetable.

Attorney General Jeremy Wright, who led the Government's case, said Theresa May's administration was "disappointed" by the ruling but would "comply with the judgment of the court and do all that is necessary to implement it".

Brexit Secretary David Davis told the Commons legislation to ensure the government can trigger Article 50 by the end of March will be introduced "within days".

Responding to the Supreme Court verdict, Labour leader Jeremy Corbyn said his party would not "frustrate the process for invoking Article 50" but will seek to amend the Government's bill.

The SNP, the third largest party in the Commons, said it will put forward 50 "serious and substantive" amendments to the legislation.

Former first minister Alex Salmond said: "If Theresa May is intent on being true to her word that Scotland and the other devolved administrations are equal partners in this process, then now is the time to show it."

Lib Dem leader Tim Farron said he "welcomed the verdict" and confirmed his party would not vote for Article 50 as he reiterated his call for another referendum on the terms of the final deal.

The @libdems are clear, we demand a vote of the people on the final deal and without that we will not vote for A50 https://t.co/PQXxncVkUb 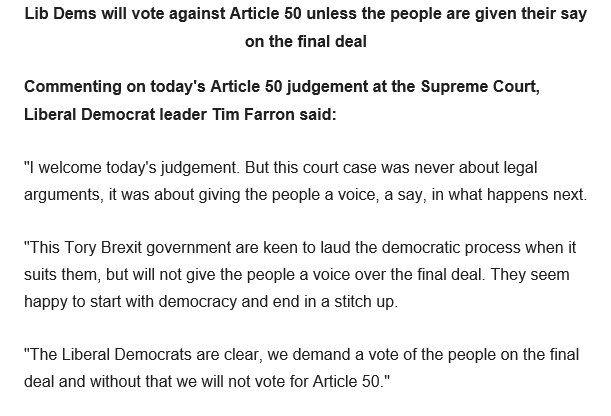 The Government made the legal challenge over the start of the EU divorce proceedings after a landmark High Court ruled in November the Prime Minister did not have the trigger Brexit without consulting MPs and peers.

Announcing the latest ruling, Supreme Court President Lord Neuberger said: "By a majority of eight to three, the Supreme Court today rules that the Government cannot trigger Article 50 without an Act of Parliament authorising it to do so."

The verdict came a week after Prime Minister Theresa May outlined her vision for a "hard" Brexit, which includes pulling out of the single market.

In the High Court case Lord Chief Justice Lord Thomas, alongside two other leading judges, ruled the prime minister lacked power to use the royal prerogative to trigger Article 50 of the Lisbon Treaty and start the two-year process of negotiating Brexit without the prior authority of parliament.

That decision provoked an outcry from hardened Leave campaigners and saw the judges labelled "enemies of the people" by the Daily Mail.

The subsequent Supreme Court appeal in December, which saw a record 11 justices listen to four days of detailed legal argument, attracted media attention from around the globe, becoming the most televised UK case ever.

The first was the case of Miller and Dos Santos, answering the following question: "Does the Government have power to give notice pursuant to Article 50 of the Treaty on European Union of the United Kingdom's intention to withdraw from the European Union, without an Act of Parliament providing prior authorisation to do so?"

In a joint judgment of the majority, the Supreme Court holds that an Act of Parliament is required to authorise ministers to give Notice of the decision of the UK to withdraw from the European Union.

The second case saw the Court asked: "Does the triggering of Article 50 of the Treaty on European Union by the exercise of the prerogative power without the consent of the people of Northern Ireland impede the operation of section 1 or section 75 of the Northern Ireland Act 1998?"

On the devolution issues, the court unanimously concludes that neither section 1 nor section 75 of the NIA is of assistance in this case, and that the Sewel Convention does not give rise to a legally enforceable obligation.