A public ballot has opened for tickets to Professor Stephen Hawking's thanksgiving service next month.

A charity helping the hungry in Cambridge was able to put on an extra-special Easter lunch - thanks to Stephen Hawking.

Film star Eddie Redmayne will give a reading at the funeral of renowned physicist Stephen Hawking this afternoon (Saturday).

Mourners - including actor and former Cambridge student Eddie Redmayne have travelled to the city to pay their respects.

Colleagues at The University of Cambridge have paid tribute to Professor Stephen Hawking as a "scientific phenomenon" who was "one of the most brilliant theoretical physicists since Einstein".

The renowned British physicist died peacefully at his home in Cambridge at the age of 76.

He was a fellow of Gonville and Caius, the university college which was his academic home for almost all of his working life. He described it as a "constant thread running through my life".

He became a fellow of Caius in October 1965, two years after being given an initial medical diagnosis suggesting he had just two years to live.

Today the college paid tribute to a man "whose wicked sense of humour enlivened High Table dinners and saw him spinning uproariously around hall in his wheelchair to the strains of a waltz at a college party".

“Stephen’s loss is a great one for the college. Caius is Stephen – they have been intertwined for over 50 years.

“There is no doubt that Caius played a very important part in his life, from offering him his first opportunities as a research fellow, keeping him on when he needed support, and flying him back from a conference when he desperately needed medical help.

He remembers his real voice - famously replaced by his trademark American-accented synthesiser as his motor neurone disease worsened.

“Stephen’s own voice was a rather cut-glass English one. By concentrating quite hard and trying to be sensitive to what he was trying to communicate, a few Fellows could interpret what he was saying.

“In College meetings, it was sometimes necessary for us to repeat what he said.”

The Motor Neurone Disease Association says it has had an influx of donations this morning following the death of Professor Stephen Hawking.

The charity, based in Northampton, says it's had so much traffic over the past couple of hours the website has now crashed. Professor Hawking became Patron of MND Association in 2008.

Prof Hawking survived for around half a century after being diagnosed with motor neurone disease (MND), despite being told he had just years to live when he was diagnosed

"All of us at the MND Association have been extremely saddened by the news of Professor Hawking's passing. Through so many years in the public eye he did a huge amount to raise awareness of motor neurone disease, yet he never allowed himself to be defined by his illness. His approach to life with MND is an example to all of us."

The disease kills a third of people within a year and more than half within two years of diagnosis. Yet Prof Hawking was diagnosed with the condition in his early 20s and lived until he was 76.

The condition is fatal, and usually progresses rapidly, affecting the brain and spinal cord.

The MND Association states that the condition affects everyone differently - not all symptoms will affect everyone and symptoms progress at varying speeds.

It affects around 5,000 people in the UK. There is no cure for MND and there is not a clear answer about what causes the condition.

Social media feeds are this morning awash with tributes to Professor Stephen Hawking, who died at home in Cambridge this morning.

Sad to hear about Stephen Hawking. What a remarkable life. His contributions to science will be used as long as the… https://t.co/xlFdbvLhmK

In loving memory of Stephen Hawking. It was an honor to have him on The #BigBangTheory. Thank you for inspiring us… https://t.co/OEeu4ZpaWa

Remembering Stephen Hawking, a renowned physicist and ambassador of science. His theories unlocked a universe of po… https://t.co/bcCi0mnhD1

there’s a big black hole in my heart hours before Pi day. Rest In Peace @steven_hawking... See you in the next ❤️

Goodbye #StephenHawking Thank you for being - amongst everything else - a great laugh. https://t.co/M1d1GEsv9r 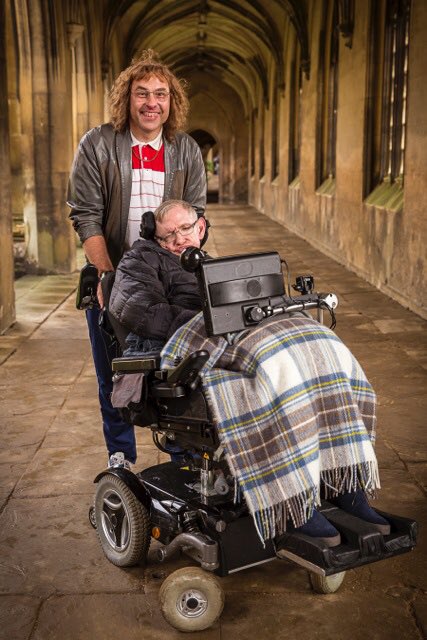 I just heard about Stephen Hawking's passing. He was both a genius and my favorite Simpsons character. We'll miss you, buddy.

Rest in peace, Stephen Hawking. As great as Einstein, and so human. https://t.co/C9xwourlUo

Professor Stephen Hawking was a brilliant and extraordinary mind - one of the great scientists of his generation. H… https://t.co/VgBnpXvrqE

Stephen Hawking inspired the world with his determination to explain the mysteries of the cosmos. But he also showe… https://t.co/HocFXw0I1r

So sad to wake to the news that the incredible Stephen Hawking has died... the universe is very much less complete.… https://t.co/amCc3reDJs

RIP Stephen Hawking. Such a legend and sad sad news to wake up to.

What a privilege it was to know Stephen Hawking. His work elevated us to the extra-ordinary; his life pushed down a… https://t.co/AO2D5xz5iE

RIP Professor Stephen Hawking, 76. The world’s most brilliant man, and someone who never stopped wondering ‘Why?’ T… https://t.co/BWI5yfNoHs

Farewell to Stephen Hawking, the most intelligent guest star in the brief history of The Simpsons https://t.co/po3fIHgEdh

Once had privilege of meeting genius Stephen Hawking. We had so much in common. Same first name. Both been in The Big Bang Theory. So much.

Professor Stephen Hawking was "an inspiration to millions" and his work will leave "an indelible legacy", the University of Cambridge has said.

The acclaimed physicist died peacefully at his home in Cambridge in the early hours of Wednesday morning, at the age of 76.

Prof Hawking first arrived at the University of Cambridge in 1962 as a PhD student, and rose through the ranks to become the Lucasian Professor of Mathematics, a position once held by Sir Isaac Newton, in 1979.

He retired from this position in 2009, and became the Dennis Stanton Avery and Sally Tsui Wong-Avery Director of Research in the department of applied mathematics and theoretical physics until his death.

"Professor Hawking was a unique individual who will be remembered with warmth and affection not only in Cambridge but all over the world. His exceptional contributions to scientific knowledge and the popularisation of science and mathematics have left an indelible legacy. His character was an inspiration to millions. He will be much missed."

Prof Hawking was a fellow at the university's Gonville and Caius College, where a book of condolence is due to be opened. This morning the flag at the college is at half-mast.

The renowned British physicist died peacefully at his home in Cambridge.