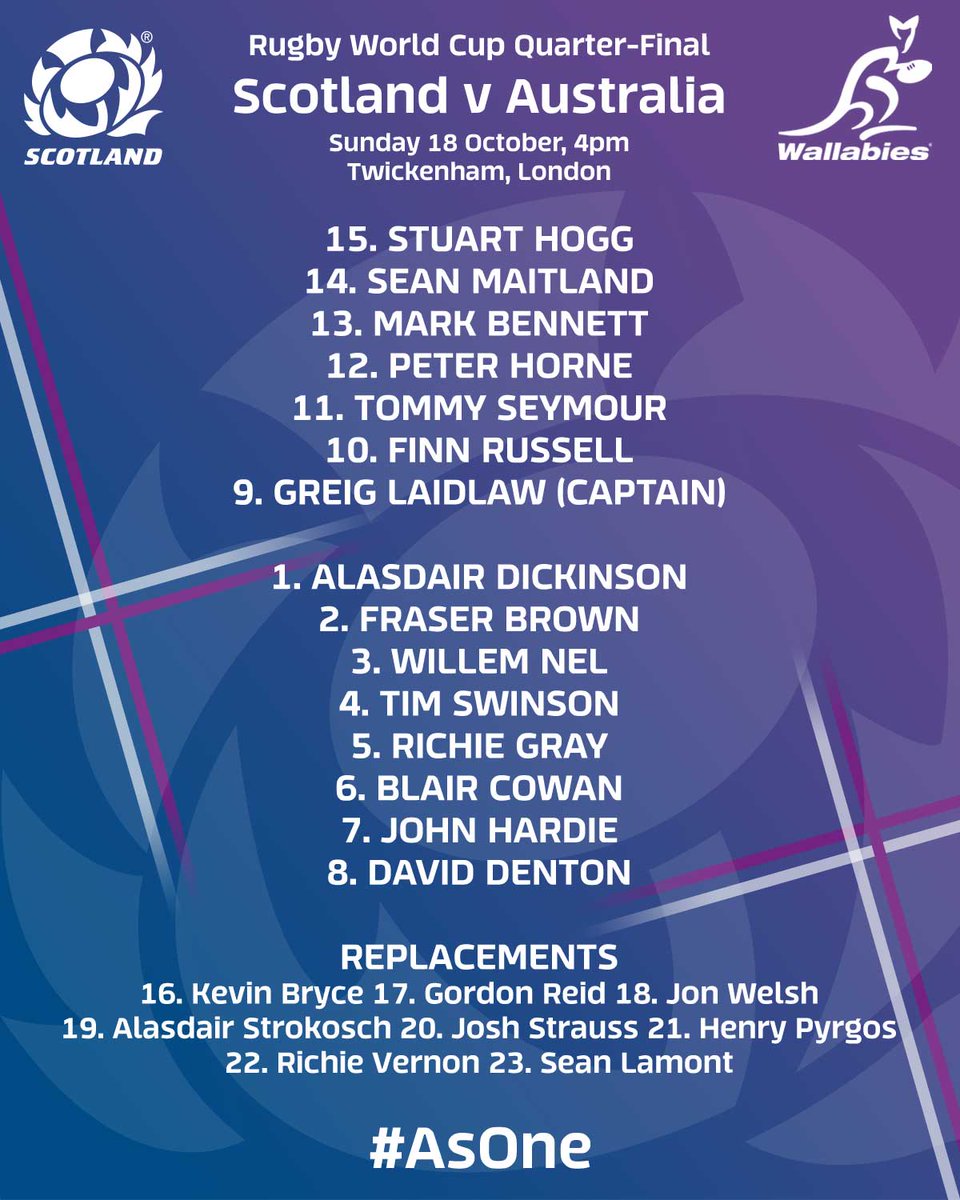 England's Rugby World Cup dreams were shattered on Saturday after being dumped out of the pool stages by Australia.

If you were an England fan, which of the remaining home nations will you be supporting now?

ITV Border's sports reporter Ryan Dollard has been following a Scotland team - with a strong Scottish Borders contingent - to their Rugby World Cup match in Newcastle.

He got more than he bargained for chatting to these fans:

A strong performance from South Africa gave them the lead against Scotland at half time, but Scotland have made an excellent start to the second half.

Bismarck du Plessis got the opening try for the Springboks, after a lengthy stoppage by the television match official. Handre Pollard's conversion gave them a seven point lead.

Pollard kicked two penalties to extend the lead, before Scotland captain Greig Laidlaw pulled three points back, bringing it to 13-3.

South Africa tight-head prop Jannie du Plessis then clattered Fraser Brown in the ruck, and was sent to the sin-bin.

The penalty was too far out for Jedburgh's Laidlaw, who fell short.

Then, on the stroke of half time, South Africa's dreaded rolling maul heaved into action.

As the Scots tried desperately to fight back, the ball was moved out the back and JP Pietersen had a simple finish.

The conversion was easy for Pollard, sending the Springboks into the break 20-3 up.

Shortly after the restart scrum-half Greig Laidlaw scored another penalty, and in the 48th minute Tommy Seymour sent St James' Park into raptures, finishing from close range after Duncan Weir embarked on a mazy run after stealing a pass.

Laidlaw converted, but Pollard pulled the Springboks ahead again with a drop goal, taking it to 23-13.

Greig Laidlaw then had a moment to forget, getting a yellow card for pulling down JP Pietersen as he tried to escape down the wing.

But far from panicking, Scotland closed the gap further - Duncan Weir's penalty bringing it back to 23-16.

South Africa hit back instantly with another Pollard penalty restoring the ten point lead, and yet another taking it to 29-16.

Then, in the 72nd minute, South Africa looked to have wrapped up the victory when Habana dived across the line on the left wing, before Scotland could push him into touch.

The Springboks held on to beat Scotland 34-16.

That's according to fans at the ground, who think the Scottish Borders pair could make the difference for Scotland:

Scotland are warming up at St James' Park, ahead of their clash with South Africa.

The stadium is beginning to fill up with fans from both nations.

The #RWC2015 is here and there's a great atmosphere in #Newcastle as #RSA and #SCO arrive in town #ProudToProtect http://t.co/SV7kHiFQae 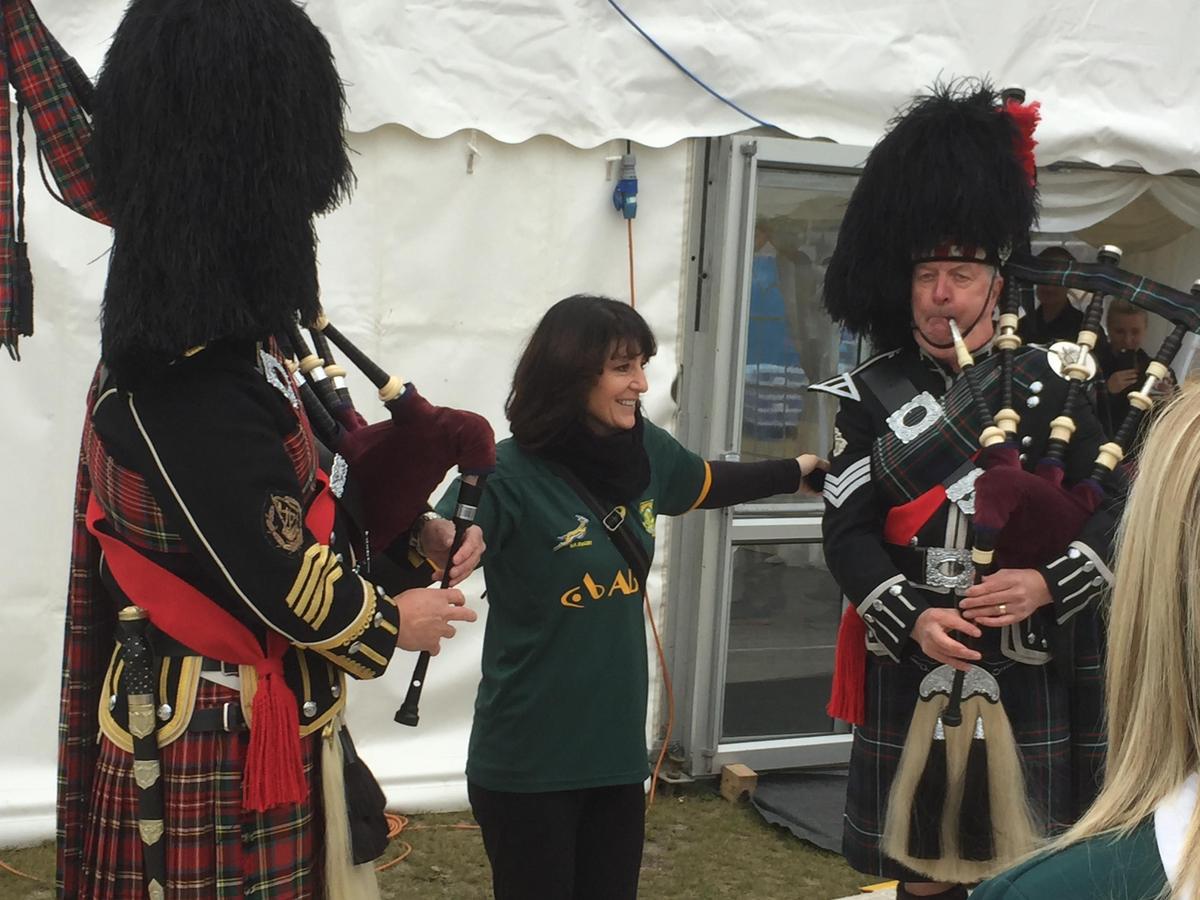 In around three hours the first Rugby World Cup game in Newcastle kicks off.

Tens of thousands of fans have converged on the city, and police say the atmosphere has been great so far.

Their side may have had a shaky start to the Rugby World Cup, but South Africa's fans go into today's match against Scotland with their trademark confidence.

The Fanzone in Newcastle is already filling up, ahead of the game at St James' Park this afternoon:

Thousands of Scotland fans have crossed the border to support their team today... against the might of the Springboks.

They've converged on Newcastle, and confidence is high ahead to the clash which could see their team through to the quarter finals.

Scotland can all but clinch a quarter finals slot if they beat the Springboks, but they'll have to stop Heyneke Meyer's rampaging forwards.