Cumbria Chamber of Commerce is calling for clarity from the government on the status of EU nationals working in the county.

The chamber says they are a valued part of the county's workforce, and any uncertainty over their right to work here after Brexit could harm the economy.

Liberal Democrat leader and local MP Tim Farron has been taking part in an anti-Brexit march in London.

The Westmorland and Lonsdale MP has pledged to fight against plans for Britain to leave the European Union. 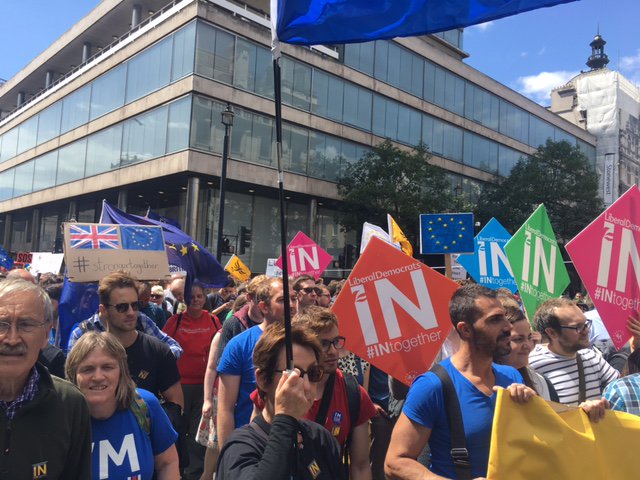 Liberal Democrat Leader Tim Farron says he will fight the next general election on a pledge to keep Britain in the EU.

The Westmorland and Lonsdale MP says it gives people a chance to vote for a party that will "undo the chaos Britain finds itself in."

Fifty six per cent of people in Cumbria voted to leave the EU in Thursday's vote.

The Labour MP for Copeland has described the 'damage' to his party as a result of the EU referendum as 'incalculable'.

Writing in the Daily Telegraph, Jamie Reed says his party's campaign to remain within the European Union 'had struggled to be heard'.

The truth is that the Labour leadership did not give this campaign the profile, resources or energy that it required.

The Labour leader Jeremy Corbyn has defended his contribution to the Remain campaign.

Speaking at an event today, Mr Corbyn said he had been amazed that more than 100,000 people had signed a petition calling for him to remain in the role.

Scotland's First Minister Nicola Sturgeon says her government will seek to enter into "immediate discussions" with Brussels to "protect Scotland's place in the EU" following the Brexit vote.

Ms Sturgeon said she will establish an advisory panel with experts to advise her on legal, financial and diplomatic matters as she seeks to continue Scotland's membership.

The First Minister said her cabinet had agreed to begin work on legislation that would allow for the option of a second independence referendum.

The Scottish Cabinet is holding an emergency meeting after the shock victory for Brexit campaigners in the European referendum.

The government team is gathering in Edinburgh to discuss the next steps they will take after the UK voted to leave the European Union.

The verdict resulted in David Cameron announcing on Friday that he would step down as Prime Minister before October's Conservative conference.

Scotland opted overwhelmingly to be part of the EU, by 62 per cent to 38 per cent, a difference which prompted First Minister Nicola Sturgeon to warn the UK that a second vote on Scottish independence is now "highly likely".

Cumbria Tourism has said that the UK's decision to leave the European Union will clearly have 'implications' for the industry.

The decision to exit has been made and clearly there are a lot of implications.

The full impact for the UK and Cumbria’s tourism industry is still unknown, but as the body representing more than 60,000 people dependent on the £2.6 billion visitor spending in the county, Cumbria Tourism will be doing everything possible to make sure that there is minimum disruption and that any changes positively impact on travel and tourism.

We will continue to keep our members informed and up-to-date on the changes as they unfold over the coming months.

ITV Border Correspondent Hannah McNulty went to speak to Cumbria businesses both before and after the EU referendum vote.

Watch her reports below:

The UK's decision to vote to leave the EU was not a shock, according to the chairman of the NFU in Cumbria.

David Raine, who farms near Kirkoswald, says the agricultural industry in the county was very divided on the issue. He points to issues such as frustration with EU bureaucracy and a desire to take back control as being factors leading many farmers to vote to leave.

But speaking to ITV Border he said it would now pose "significant challenges" for the industry.

Liberal Democrats leader and South Lakeland MP Tim Farron has described his 'worry' for his constituents following the UK's decision to leave the European Union.

Speaking to ITV Border, he said:

I worry about farmers in our community, I worry about the tourism industry, but when all said and done, the people have decided & we have to accept what they have said.

The majority of people in my area voted to remain but across the country people voted to leave and you've got to accept the democratic mandate of the people.

Just got to do our best now to make sure our part of the world at least doesn't suffer as much as it looks like it's going to.