More than 2,500 homes were left without power, buildings were damaged and several roads were closed as severe weather battered parts of Cumbria last night.

Strong winds caused damage to buildings in west Cumbria. Houses in Seaton were among those affected.

The old Moota Hotel in Cockermouth also had it's roof blown off. The debris from that meant the A595 had to shut.

You can see just some of the destruction caused at the hotel in the short video below.

The M6 Southbound was closed after a lorry overturned near Tebay - and the A6 was also affected at Shap after a tree fell down and blocked the road.

A flood warning was put in place for Whitesands in Dumfries and Galloway although that is no longer in force.

In the west of the region, engineers have been assessing the damage at Whitehaven Harbour after it was pounded by ferocious waves.

The old quay is closed to the public and engineers say they don't know when it will be repaired or how much it will cost. Katie Hunter reports:

Yesterday's stormy weather left many houses across out region without power and many facing a huge clean-up job today.

While the clean-up begins, parts of the region have been experiencing another day of wild weather.

The coastal town of Eyemouth has taken a battering from the biggest high tide in more than a century.

Businesses at the harbour-side have been cleaning up today after the worst flooding in the town for decades.

The coastal town of Eyemouth in the Scottish Borders has seen the highest tides in more than a century.

It has caused flooding in properties on the harbour-side as massive waves battered the harbour wall.

For more information on how to prepare your property in advance see the Environment Agency website.

The Environment Agency have issued flood warnings across England.

Two flood warnings and two flood alerts have been issued on the Cumbria coast.

The Flood Alerts App on Facebook shows were we're most concerned about flooding: http://t.co/fnoPHjHW8D #floodaware http://t.co/RYzhSVpXzF 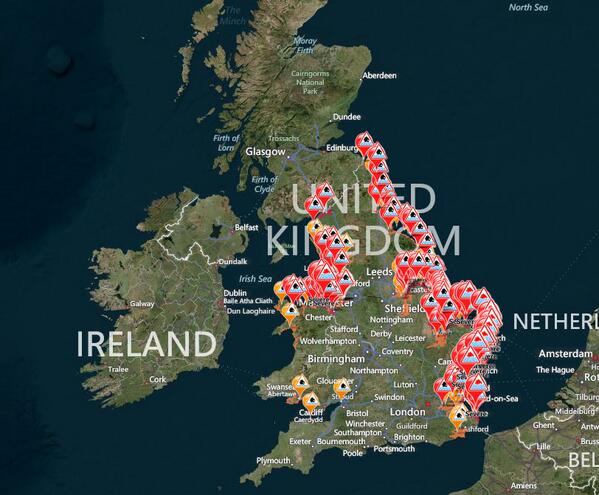 A costal flood alert has been issued for Scottish Borders.

High tides are expected this afternoon which could cause low lying ground to flood, especially in places like Eyemouth.

Members of the public are being urges to remain vigilant and safe.

Advice and information is available through Floodline on 0845 9881188 or on the Scottish Environment Protection Agency's website here.