Mr Ward's selection as a candidate in the Bradford East constituency was criticised by Theresa May at Prime Minister's Questions today, following a row over anti-semitism.

In 2013, Ward was accused of anti-semitism for comments he made about Israel and Gaza. He has also previously said that the "the Jews" have been "inflicting atrocities on Palestinians".

In a statement Mr Farron said he had sacked Mr Ward, who lost his seat in 2015 general election, because he is "unfit to represent the party". 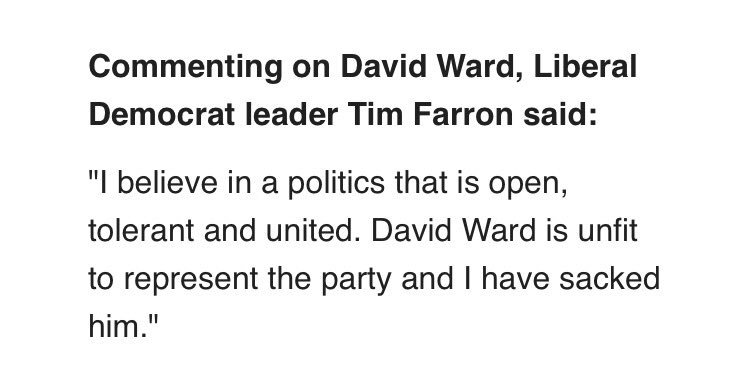 In a defiant interview with Calendar, Mr Ward denied he was anti-Semitic.

He said: "We knew there was going to be a campaign against me and anything I said would be used against me and pressure would then be put on the party to get rid of me – and I would challenge people to find one single derogatory comment that I have made against Jews which was not related to something being done against Palestinians in Israel.

"Find me that - you won't find it anywhere because I am not anti-Semitic, I am not a racist. I am a true Liberal and I will continue to speak up for those people who are being persecuted."