A fire at an industrial estate in Leeds has caused damage costing around £7 million.

Police are treating the fire, which destroyed part of the Tradpak premises, in Armley Road, and spread to neighbouring Hazel Products, as arson.

It is estimated that the damage caused to the businesses could be in the region of six to seven million pounds.

Emergency services were called in the early hours of Easter Monday and more than 100 firefighters tackled the blaze and stopped the fire spreading further.

Detective Inspector Mark Swift, of Leeds District CID, said: "Tackling this large-scale fire and then making the site safe for investigation was a lengthy process which took some days to complete.

"We worked closely with specialist fire investigators and established that the fire had been started deliberately and as such we are investigating this incident as arson. It is vital that we identify whoever was responsible.

Police have confirmed that the huge fire that broke out in Leeds last week is being treated as suspicious.

More than 100 firefighters were called to the blaze at Tradpak Recycling on Armley Road in the early hours of Easter Monday. At its height, smoke could be seen from across the city. Police were not allowed on to the scene to investigate for days after, until firefighters confirmed the scene safe.

Thousands of fish have been killed by pollution from a huge fire in Leeds.

It broke out in the early hours of Monday morning at a chemical recycling firm by the Leeds Liverpool canal.

Now chemicals have leaked out and poisoned a mile long stretch of the waterway. Police are investigating a report that the fire itself may have been started by burglars.

Thousands of fish have died following a huge fire in Leeds.

It is thought that chemicals from the blaze at a packaging company by the Leeds Liverpool Canal have run into the water and killed the fish.

Staff from the Canal and River Trust have been trying to rescue stocks but many have perished in the polluted water.

Demolition work is beginning following a fire in Leeds on Easter Monday.

The blaze broke out on Armley Road just before 2am and was dealt with by 100 firefighters. The fire at Tradpak Recycling and Hazel Products was brought under control by midday.

20 firefighters remain at the scene today.

“There are several seats of fire underneath sections of the roof of Hazel Products that have collapsed. We are working with demolition crews to gain access and then we will advance with handheld firefighting jets to deal with the remaining seats of fire.”

It is anticipated that firefighters will be at the scene all of today and possibly tomorrow.

Armley Road is partially closed and will be for the majority of today. Police are also in attendance to manage traffic flow.

Emergency services have been praising residents for their patience over a massive blaze at an industrial estate in Armley near Leeds.

Albion Way remains closed for safety reason as does A647 Armley Road both ways between Canal Street and Stanningley Road. At its height around 100 firefighters were involved in tackling the blaze.

Firefighters are working to make the site of a massive fire on an industrial park in Armley near Leeds safe. Emergency services are damping down the blaze at the Tradpak site on Albion Way and want to reassure residents everything possible is being done to bring normality back to the area.

" We can confirm that smoke from the fire is not toxic. However, as a precaution , we have continued to advise people near the site to keep doors and windows shut while the smoke has cleared, as we would do with any large fire. " 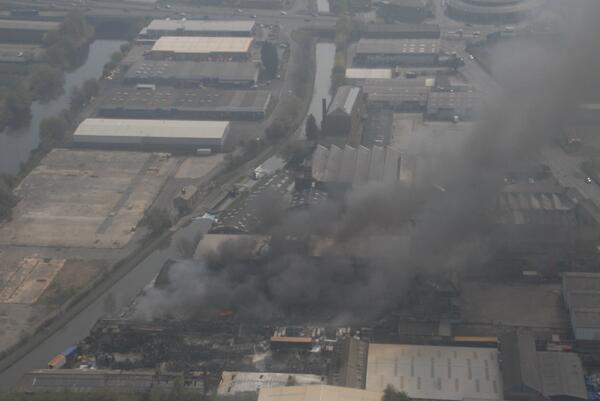 A hundred firefighters have been tackling a huge blaze which ripped through a building used for storing chemicals and a neighbouring firm in Leeds overnight.

It is not yet known what caused the fire, but a nearby nightclub had to be evacuated and explosions could be heard up to 8 miles away as the fire took hold. Jon Hill reports.