Virgin Trains have taken to Twitter to release pictures showing the 'extensive damage' to overhead wires between Retford and Doncaster.

The damage is causing major disruption between Grantham and Doncaster which is expected until at least the end of the service today. 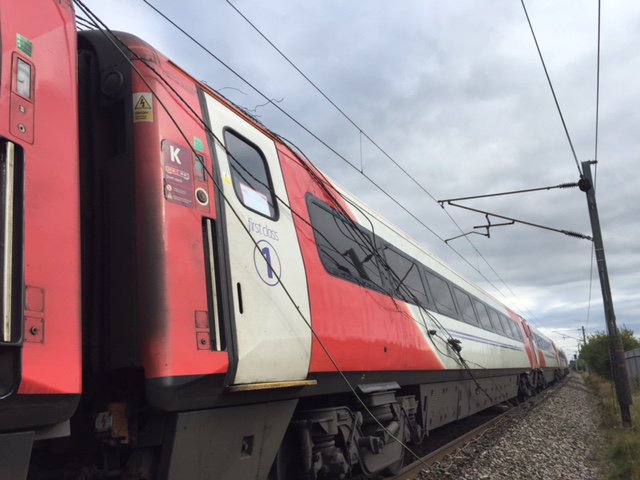 There are delays of up to one hour on Virgin Trains East Coast Southbound between Doncaster and Retford due to fire on a freight train.

Trains are currently unable to run from Retford towards Doncaster. The line from Doncaster towards Retford has reopened and trains in this direction are returning to normal.

The fire is affecting services from Bradford, Leeds, York and Hull to London.

Major delays and cancellations on Grand Central between Grantham and Doncaster due to overhead line problems at Retford.

Services are being diverted via Lincoln Central.

Trains are at a standstill in the Retford area whilst the problem is investigated.

A prison near Retford has one of the highest rates of suicide among inmates in the country.

Six people died in custody at HMP Ranby in 2015, four of them took their own life.

Over the past three years there have been thirteen deaths in the prison, eight of which were self-inflicted.

An investigation is underway to find out what caused a fire in a block of flats which left one person dead.

It is believed the blaze started around 4.30pm in Cobwell Road in Retford yesterday Friday November 21, 2014.

The building was evacuated as firefighters battled to extinguish the fire. Officers are now working to find alternative accommodation for the residents affected.

40 protesters detained by police after they stopped and climbed on a coal train in Nottinghamshire have been released.

The Greenpeace activists blocked the 400-metre freight train on sidings leading to Cottam power station for ten hours yesterday after flagging it down using the stopping signals.

A life-size polar bear puppet was used to stop the train from moving.

British Transport Police have confirmed they arrested 3 activists and spoke with 37 others.

Investigations will begin today into how a group of climate change protestors managed to stop a freight train loaded with coal.

50 Greenpeace activists boarded the train yesterday as it was heading to Cottam Power Station near Retford.

They stopped the train for eight hours before being detained by police.

A group of climate change activists, who seized a freight train carrying 1,500 tonnes of coal in Nottinghamshire, have been detained by police, according to Greenpeace UK on twitter.

UPDATE 1/3: The team on board the coal train outside Cottam Power Station have now been detained by the police

The Greenpeace campaigners say they plan to stay with the train until midnight. From the scene, Gareth Owen sent this report.

We were called to a crossing at Westbrecks Lane in South Leverton, Retford at 2.45pm following reports of a number of protestors, believed to be from Greenpeace, halting the progress of a coal train.

Officers are currently responding to the incident together with colleagues from Nottinghamshire Police.

"The safety of our employees and the public is our priority and we are currently working with British Transport Police to ensure everyone involved is safe and out of harm.

"We operate a diverse mix of electricity generation and produce more low-carbon electricity than any other generator in Britain from our nuclear power stations and wind farms."

Meanwhile DB Schenker Rail UK confirmed that one of their trains has been brought to a stand by a number of protesters on the Cottam branch line near Retford. The train was travelling from Humber International Terminal to Cottam Power Station carrying 1,500 tonnes of coal.