Super League strugglers Wakefield Wildcats have signed Widnes forward Ben Kavanagh on loan for the rest of the season.

The 27-year-old Scotland international is under contract with the Vikings until 2016 and has appeared in six of their 10 Super League matches so far this year but was not guaranteed a regular spot in coach Denis Betts' team.

"Ben is just on the edge of our first-team squad so the opportunity to play with the Wakefield team for the remainder of this season will give him the chance to get some regular first-team action," Betts said.

Wakefield, bottom of the table after losing their last eight matches, have been badly hit by injuries and have lost the services of George Griffin (Salford) and Jordan Hand (St Helens) following the expiry of their month-long loan deals.

Wildcats coach James Webster said: "I was lucky enough to have played with Ben at Widnes when he was just starting out his career. He will add some size and speed to an area we have been short in over the past six weeks." 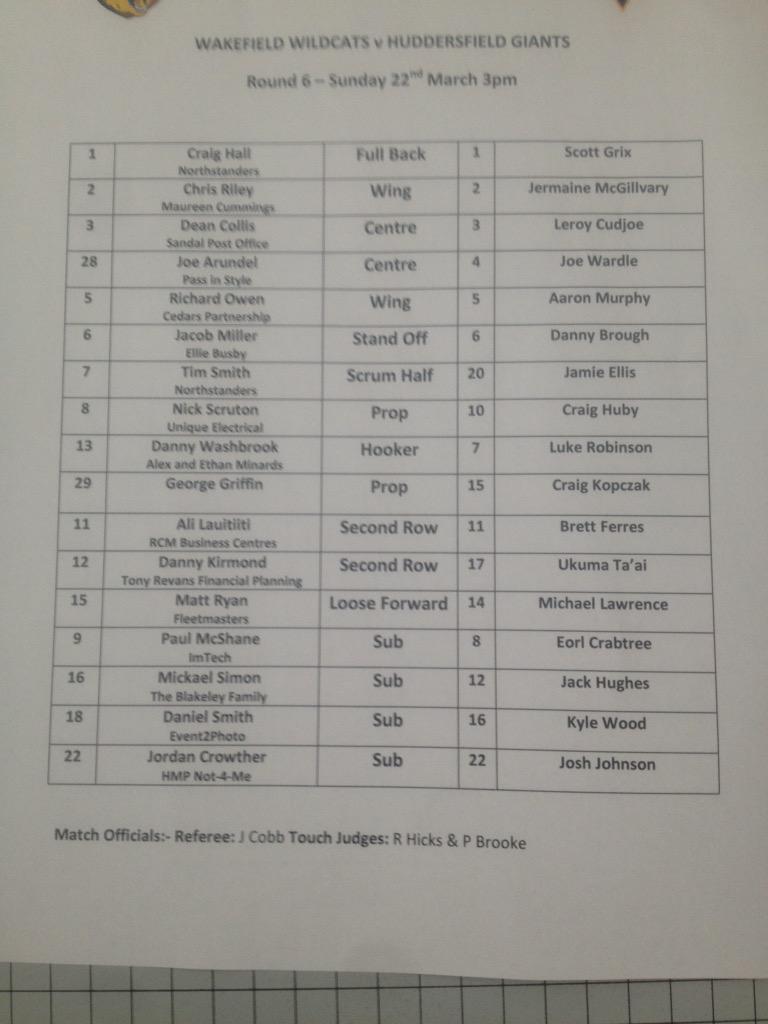 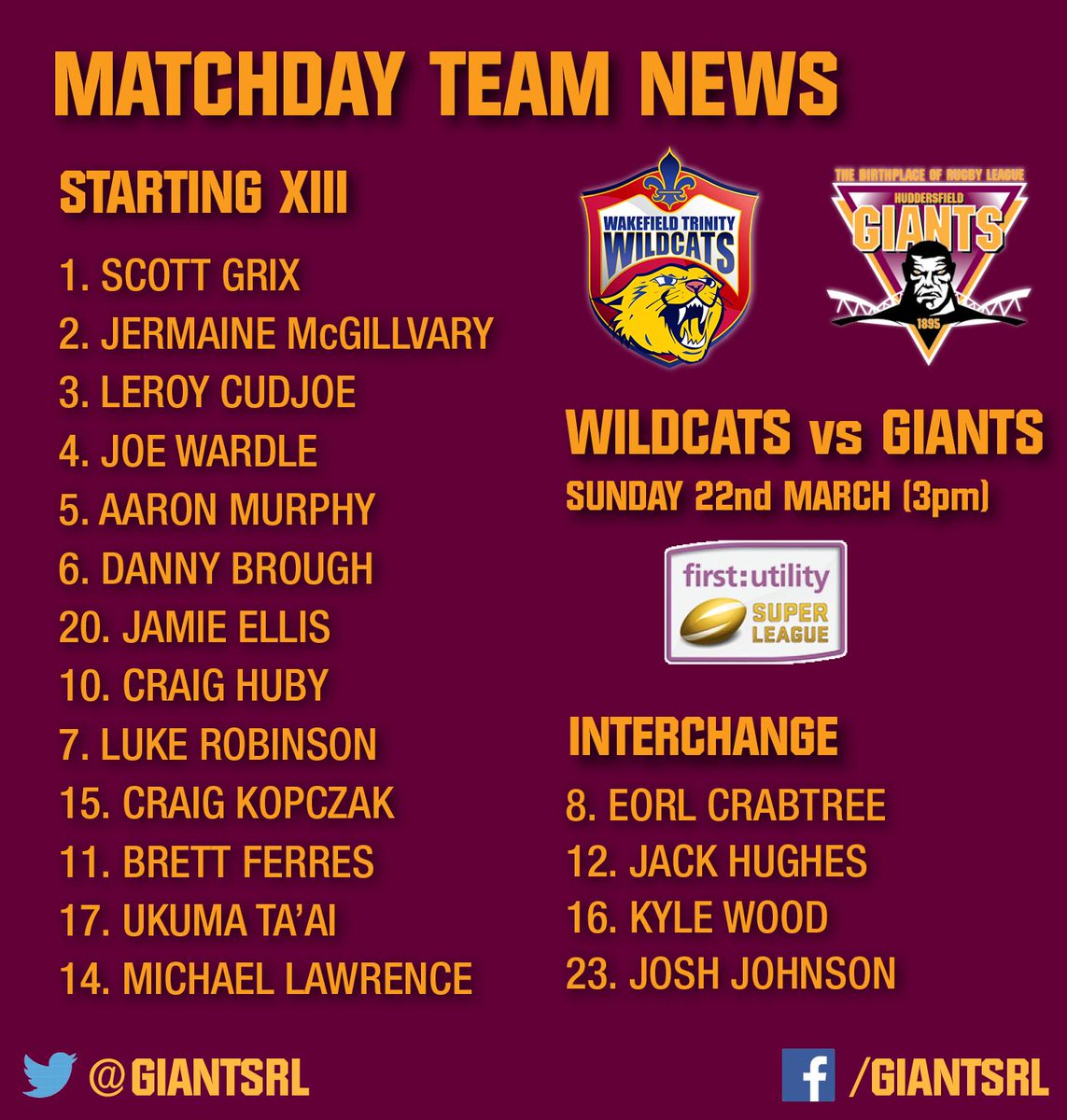 George Griffin will have to wait to play alongside his older brothers in Super League after rejoining Wakefield on a month's loan.

The 22-year-old back-row forward, who came through the junior ranks at the Wildcats before moving to Hull KR and London Broncos, joined brothers Darrell and Josh at Salford at the start of the season but has yet to break into Iestyn Harris' team.

Wakefield coach James Webster has snapped up the forward after losing Matty Ashurst, Ian Kirke, Lopini Paea, Scott Anderson and Chris Annakin to injury and is set to give him his senior debut in Sunday's home game against Huddersfield.

George has had plenty of experience in Super League at both London and Hull KR.

He is able to play good minutes which will help us as we are extremely short of props leading into a busy Easter period.

The Super League season is set to kick off this afternoon for our region's teams.

Huddersfield are at home to Hull FC, with Leeds travelling to Hull KR.

Meanwhile Castleford start their season with a clash against their fierce local rivals Wakefield.

Both Tigers boss Daryl Powell and Wildcats Head Coach are looking forward to starting the campaign with a derby.

22-year-old Miller was released by Hull FC earlier this monthand has now been snapped up by their Super League rivals for their 2015 campaign.

He made 20 appearances for the Black and Whites and is now hoping to prove himself with the Wildcats.

"Wakefield have given me a great opportunity to rediscover my best form and this is a challenge I'm eager to fulfil," said Miller, who moved to England following his release by Wests Tigers last year.

Head coach James Webster added: "Jacob's signing allows us to have greater depth and competition in the halves.

“He is similar to many players that have signed for Wakefield in that he is a young player with a point to prove and a burning desire to cement a spot in the team."

The 29-year-old enjoyed a successful career in both Super League and the NRL which saw him make 209 appearances.

Poore joined Wakefield Wildcats before moving to Hull where he impressed Robins fans during his stay.

The Australian fractured his knee cap on Easter Monday against Catalan Dragons and despite having successful surgery and rehab, Poore has decided to return home.

Poore said: "It's never an easy call to make but I know it's the right decision for me, my family and for the club as well.

"My knee has been responding well to treatment but the feedback from the medical staff is that I run the risk of damaging it further if I was to return.

"The contact might mean I would never be able to walk properly again and that's not a risk I want to take."

It will be master against apprentice when Wales do battle with France in their must-win European Championship clash in Albi on Saturday afternoon.

The second round of matches pits French head coach and former Hull FC and Wakefield head coach Richard Agar against his old mentor John Kear, a former England and France boss who is now in charge of his third national team after succeeding Iestyn Harris at Wales.

The 2014 European Championship is one long round of reunions for the veteran former Wakefield Head Coach Kear, who helped launch Agar's coaching career at Hull in 2004, coached Scotland captain Danny Brough at two Super League clubs and in tandem with Ireland boss Mark Aston steered Sheffield Eagles to their stunning win over Wigan in the 1998 Challenge Cup final at Wembley.

"I go back a long way with all three," Kear said. "I've had a very interesting last 10 or 15 years. We keep inter-twining, locking horns and it's great. It's part of the rugby league family."

Both France and Wales go into their meeting on the back of defeats and know a loss in Albi will end their hopes both of tournament success and of securing the big prize of a place in the 2016 Four Nations Series.

Kear's men will be looking to bounce back from their 42-18 defeat by Scotland while pre-tournament favourites France are reeling from a shock 22-12 loss to Ireland.

"We had a really good review of the previous performance against Scotland and we've identified areas that we need to tidy up and improve on," Kear said.

"The players' application has been first class and if they take that on to the field against France then I'll be very satisfied.

"This week will be vastly different to the Scotland game in Cumbria last Friday. We played in a howling gale and driving rain and, from the forecasts we've been getting, we'll have no rain on Saturday, 25 degree sunshine and the ground will be very firm."

Agar is poised to give a debut to Lezignan hooker John Boudebza, who this week completed a move to Hull KR, while Kear has called up four fresh faces as he rebuilds a youthful Welsh squad.

"It's exciting for the game in Wales," Kear said. "We've given a lot of people some opportunities. Some have taken them without a shadow of a doubt and are going to be here for a good few years yet."

For Wales and Ireland, who host the Scots in Dublin on Saturday afternoon, there is also the prospect of securing automatic entry into the 2017 World Cup down under.

"With the enormity of this fixture we will be looking to up our game against Scotland," Aston said. "Last week was a fantastic victory and it is important that we keep the spirit that we showed against France and build on that."

Scotland coach Steve McCormack, who celebrated 10 years in the job on Friday, reckons his side will need to find some improvement if they are to halt the improving Irish.

"A lot of people were shocked by Ireland beating France but nothing surprises me any more," said McCormack.

"We know we are going to have to be at our very best to win.

"If we play like we did in the second half against Wales we will give ourselves a chance but we've got to learn from where we went wrong in the first half."

The 25-year-old made 12 appearances for the Wildcats last season after joining on loan from rivals Castleford Tigers.

"It's a good club to be at, I enjoyed my time here last season and think it's a great opportunity for me to set my position here.

"All the boys are going to want to get stuck in and have a big season."

Wakefield have secured the future of one of their hottest prospects by tying full-back Max Jowitt to a new four-year deal.

The 17-year-old England youth international made his Super League debut at St. Helens in August, following in the footsteps of his father Ian who played for the club in the late 1980s.

A product of the Wildcats' youth development programme, Jowitt signed his first full-time deal at 16 and has been rewarded for his progress in the last 12 months with a contract running to the end of 2018.

Max showed massive improvement last year in what was his first year as a full-time professional. He's a player of massive potential and you could see from day one when he came into the first team squad that he was not your average rugby league player.

Scrum-half Tim Smith has returned to the Wildcats on a permanent basis on a one-year contract for 2015.

Smith played a significant role in a five-game unbeaten run at the start of James Webster’s tenure that steered Trinity to Super League safety.

The 29-year old former Wigan and Parramatta Eels half-back made 89 Super League appearances in all and was the Wildcats Player of the Year during his first season in with the club in 2012.

“It was an easy decision. I think people can see I’m happy at Wakefield and enjoy everything about the club.

The players are a great bunch to play with and the coaching staff are easy to get along with.

If we keep our squad fit we’ve as much chance as anyone else to make the top eight. It will be tough but we go into the year full of optimism.”