Campaigners dressed in Victorian clothing have protested against Sports Direct's use of zero hours contracts outside the company's Annual General Meeting in Derbyshire.

Great action today at Shirebrook. SD workers now know there is a union ready to fight with them #sportsdirectshame http://t.co/WVY3zCyxti

Dozens of campaigners dressed in Dickensian style outfits and were part of a 150-strong crowd at their headquarters in Shirebrook.

The protests were led by Unite and called for an end to what they call Victorian working practices and demanded staff were paid a living wage of £7.85 an hour.

Tony Tinley, regional political officer for the union, said he felt it was important to highlight the issue.

We want to say to workers here they have rights and we want to highlight to everyone what goes on at Sports Direct.

We want to bring their practices to national attention because of the way they are being exploited. 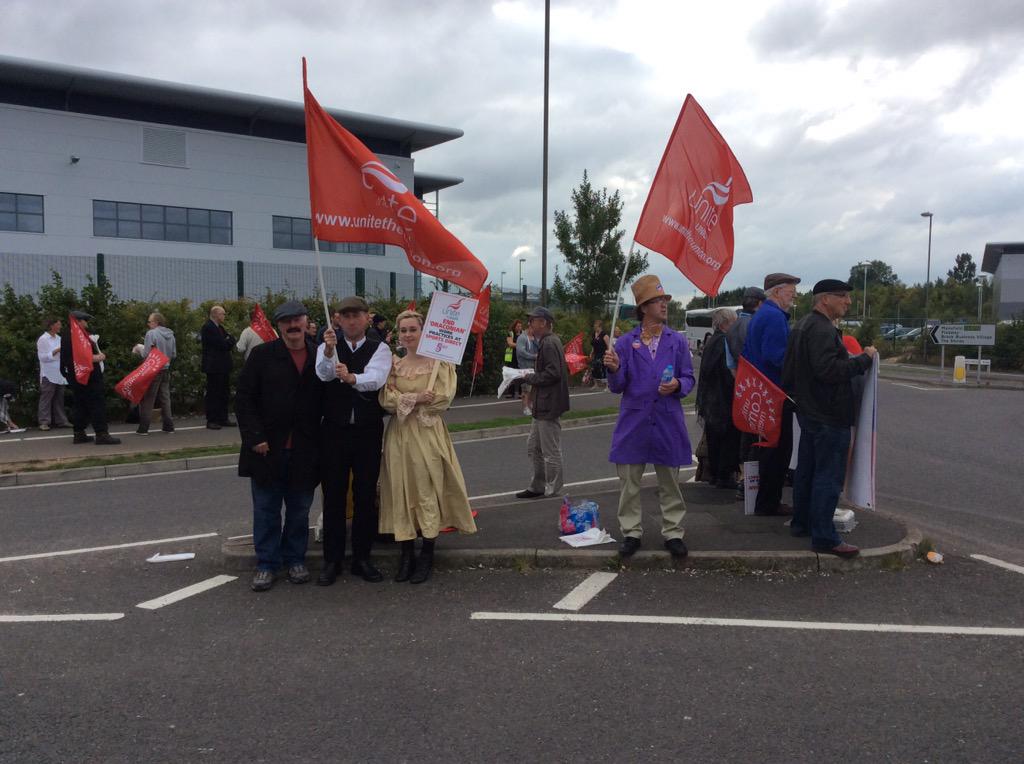 The protest at the company headquarters was one of 40 being held on Wednesday, with Sports Direct shops across the country also being targeted.

Unite said shareholders, including the Trade Union Share Owners group, were expected to raise the issue of working conditions to chairman Keith Hellawell at the AGM.

Low paid agency workers on zero hours contracts are being subjected to working conditions that are more akin to a Dickensian workhouse than a FTSE 100 company's warehouse.

These Victorian era conditions, combined with Sports Direct's rampant use of zero hours contracts across its stores, only adds to the charge that Keith Hellawell and the board are running Sports Direct like a backstreet outfit.

It's time for Sports Direct to restore dignity and security at work by paying the real living wage and putting staff on permanent contracts.

Much of the comment around the group's use of zero hours has been unfounded and inaccurate.

The group complies fully with all legal requirements which relate to casual workers, including holiday and sick pay and freedom to gain other employment.