Players out now in the stadium ready to start http://t.co/b0wHBWebYa 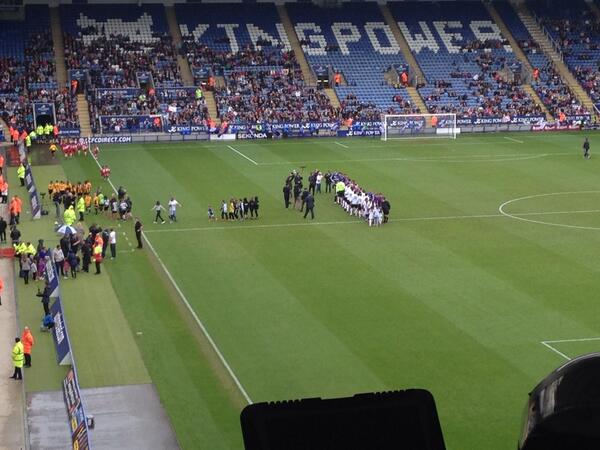 One Direction's Niall Horan has urged fans to head to Leicester's King Power Stadium for his charity football match.

If you're in Leicester today, get down to king power stadium , there's still loads of tickets left ! and you can buy them at the stadium

All proceeds from the event, called the Niall Horan Charity Football Challenge, will go to Irish Autism Action (IAA) and UK Heart and Minds Challenge.

Niall's bandmates Liam Payne and Louis Tomlinson will be joined by other stars including Olly Murs, Rod Stewart, and Robbie Fowler on the pitch.

A warning has been issued to fans headed to Leicester City’s King Power Stadium today for the Niall Horan Charity Football Challenge, urging them to devise a back-up plan in case their mobile phone runs out of charge.

Police in the city have been liaising with organisers of similar events - and said one of the major problems has been people draining their phones of battery by taking pictures and posting them online.

This means they have no way of contacting friends or family if they get separated or when arranging travel home.

Officers are advising people to write down important contact details on a piece of paper, so if their phone dies they can still call their loved ones.

Police and football bosses in Leicester are appealing to fans headed for One Direction star Niall Horan’s charity football match today to plan their travel carefully.

Three of the One Direction boys will be in Leicester for the charity match, with bandmates Louis Tomlinson and Wolverhampton's Liam Payne joining organiser Niall Horan for the event.

With thousands expected to flood through the gates of the King Power Stadium, heavy traffic is expected in the surrounding area.

In addition, Rawdykes Road will be closed before the match and afterwards.

It isn't realistic to expect to be able to drop people outside the stadium and then pick them up again afterwards - 10,000 car drivers will have had the same idea.

One Direction heartthrobs Niall Horan, Liam Payne and Louis Tomlinson will be heading to the Midlands today for a charity football match.

A-list stars including singer Olly Murs, Rod Stewart, and Robbie Fowler will all be joining the lads at the King Power Stadium - home of Leicester City Football Club.

All proceeds from the event, called the Niall Horan Charity Football Challenge, will go to Irish Autism Action (IAA) and UK Heart and Minds Challenge.

Niall - a Derby County fan - will be taking on world-class footballers including former County captain Robbie Savage in the match, which kicks off at 3pm.