This is the moment Dennis Skinner shook Jeremy Corbyn's hand before appearing to flick the V-sign at the former shadow cabinet following their resignations.

Lord Falconer has resigned from the shadow cabinet, the same day that nine of his colleagues have either resigned or been sacked.

Falconer was the shadow secretary of state for Justice and shadow Lord Chancellor.

The shadow secretary of state for Northern Ireland Vernon Coaker has joined seven other members of the shadow cabinet and resigned.

He has released a statement saying he believes it is "time for the party to unite behind a new leader" and serve as an "effective opposition".

He adds: "I have sought to make it my priority to provide reassurance to the people and political parties of Northern Ireland that Labour remains committed to the principle of consent, as expressed through the Good Friday Agreement and subsequent agreements.

"I know my successor in this role continues this vital work."

The MP for Stoke-on-Trent North, Ruth Smeeth, has also resigned from the Shadow Cabinet as Parliamentary Private Secretary for the Shadow Northern Ireland & Scotland teams.

It's with a heavy heart that I have just resigned as PPS to the Shadow Northern Ireland & Scotland teams.

Jack Dromey MP for Birmingham Erdington has resigned as Shadow Policing Minister as he believes the Labour party 'cannot fight back and win' with Jeremy Corbyn as leader.

With deep regret, my letter to my friend, @jeremycorbyn, urging him to put the working people of Britain first https://t.co/RzCAISVhYw

Mr Burden said in his resignation letter: "I honestly believe that for you to respond by digging yourself deeper into your trench is just going to make a bad situation worse, regardless of how many troops in the broader Party you believe will go over the top for you."

With a heavy heart I have sent my letter of resignation to Jeremy: https://t.co/sYEGlSalgB https://t.co/QdZzbU9bGT 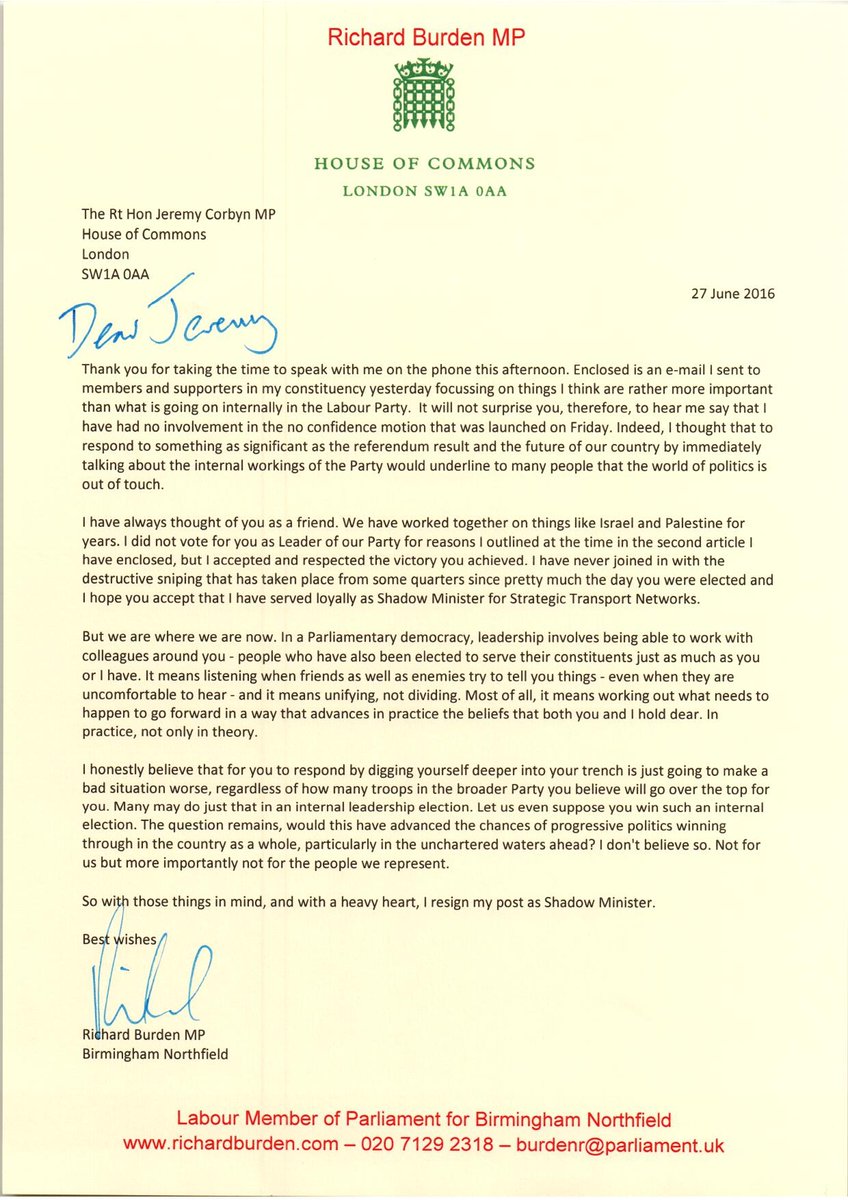 Following the historic Brexit Vote the Labour MP for Birmingham Yardley Jess Phillips says it's a time for diverse communities to come together.

She herself favoured remaining in the EU but says the priority now is to look to the future. She's also been explaining why she resigned from her junior post in Labour leader Jeremy Corbyn's shadow cabinet today.

She spoke to our political correspondent Alison Mackenzie:

Labour leader Jeremy Corbyn has been told by deputy leader Tom Watson during crisis talks that he is likely to face a leadership challenge, a senior party source said.

The meeting between Mr Corbyn and the West Bromwich MP was described as "civil" by a spokesman for the leader.

The spokesman said there was "categorically not" any call from Mr Watson for Mr Corbyn to quit.

Toby Perkins, the MP for Chesterfield, has resigned as shadow armed forces minister saying the Labour Party "needs a change at the top".

Jeremy Corbyn has said he will not "betray the trust of those who voted for me" as he vowed to stay on as Labour leader.

Mr Corbyn said he will stand in any fresh leadership election, adding that he will reshape his shadow cabinet over the next 24 hours following a wave of resignations.

He said: "I was elected by hundreds of thousands of Labour Party members and supporters with an overwhelming mandate for a different kind of politics.

"I regret there have been resignations today from my shadow cabinet. But I am not going to betray the trust of those who voted for me – or the millions of supporters across the country who need Labour to represent them.

"Those who want to change Labour’s leadership will have to stand in a democratic election, in which I will be a candidate."

The MP for Broxtowe, Anna Soubry, has reacted to Labour shadow MPs from Nottinghamshire resign today: