Weekday journeys between 7am and 7pm will rise to £6.70 for cars.

HGVs will also pay more during the day. The move has prompted renewed calls for the 27 mile route to be nationalised.

Siôn Simon, Labour's candidate for West Midlands Mayor is urging the Chancellor Phillip Hammond to give the region control over the route.

Shocking footage has been released showing a drunk lorry driver reversing along the M6 Toll forcing cars to dodge his Eddie Stobart truck.

Two Romanian men have been given suspended prison sentences after going the wrong way down the M6 Toll Road in a lorry.

Two police officers have been injured during a high-speed car chase on the M6 Toll in Staffordshire.

@expressandstar looks like police car has been involved in collision. http://t.co/9wScxCKxTB 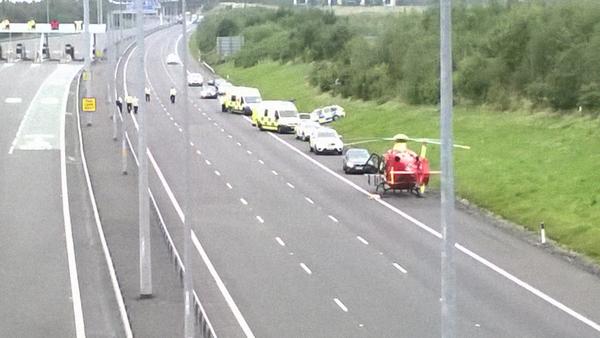 At around 9:45am police began tracking an MG ZR, which was being driven 'erratically' on the M6 through Staffordshire.

Officers tried to stop the car and put a rolling road block in place to protect other road users.

The car, travelling at speeds of up to 90mph, then went onto the M6 Toll.

After the motorway had been closed between junctions T8 and T6, the car collided with the marked police BMW.

Both cars crashed into the central reservation and ended up in the embankment.

Two police officers have been taken to hospital, but their injuries are not thought to be serious.

A 23 year old man, has also been taken to hospital with reported leg injuries.

He was arrested at the scene on suspicion of dangerous driving, failing to stop and driving while under the influence of drink or drugs.

A van has crashed through toll booth on M6 toll road, driver has now been detained after stopping in lane 3 of the carriageway.

#M6 #Toll Police led incident on the #A38 within junction T3. Expect delays in the area.

A crash involving six vehicles on the M6 Toll motorway in the West Midlands is causing long delays.

The incident happened on the southbound side of the road, at JT3 A38 (Tamworth/Sutton Coldfield).

Fire crews are at the scene of a crash involving six cars on the M6 Toll motorway in the West Midlands.

Eyewitnesses have described how there was heavy hail or sleet falling at the time of the incident.