The club chairman, John Radford, says the decision has been made with the best interests of the football club in mind.

Mansfield Town have confirmed that an allegation of racist abuse has been referred to both the FA and Nottinghamshire Police.

The club is deeply saddened to learn of the passing of former manager Duncan Russell after a short battle with canc… https://t.co/zDE8qb4vOb

The former manager of Mansfield Town, Duncan Russell, has died after a short battle with cancer.

Russ, we will always remember you for leading us to Wembley, your good humour and determined spirit. May you rest in peace.

Tributes have been paid to a young football academy physio who has died at the age of just 25. Matt Salmon who was from Leicester, was diagnosed with lung cancer in 2010, and had just announced his retirement from League Two side Mansfield Town on Wednesday following a consultation with doctors.

He spent three and a half years at the Nottinghamshire club, including a stint as first team physiotherapist.

Matt released the following statement on Wednesday as he announced his retirement.

"I have immensely enjoyed every single moment since joining Mansfield Town, three-and-half years ago. Every single member of playing and coaching staff have been incredibly supportive of my situation and have always given me the opportunity to do the job that I love.

"It has been an incredibly difficult decision to resign from my dream job at the age of 25 but unfortunately I have reached a stage where I am not able to give our players the level of care they deserve, something I have strived to do since I joined the club and made a minimum requirement for all medical staff who I've had the pleasure of working with.

I will finish by wishing the club, players, staff and fans all the best for next season and I look forward to the club playing League One football, which everyone at the club deserves."

Despite everything that has gone on the past 24 hours, this could not make me any happier. So proud of these lads,… https://t.co/NzLTCiHbhB

The club's chairman John Radford posted this tribute on Twitter. 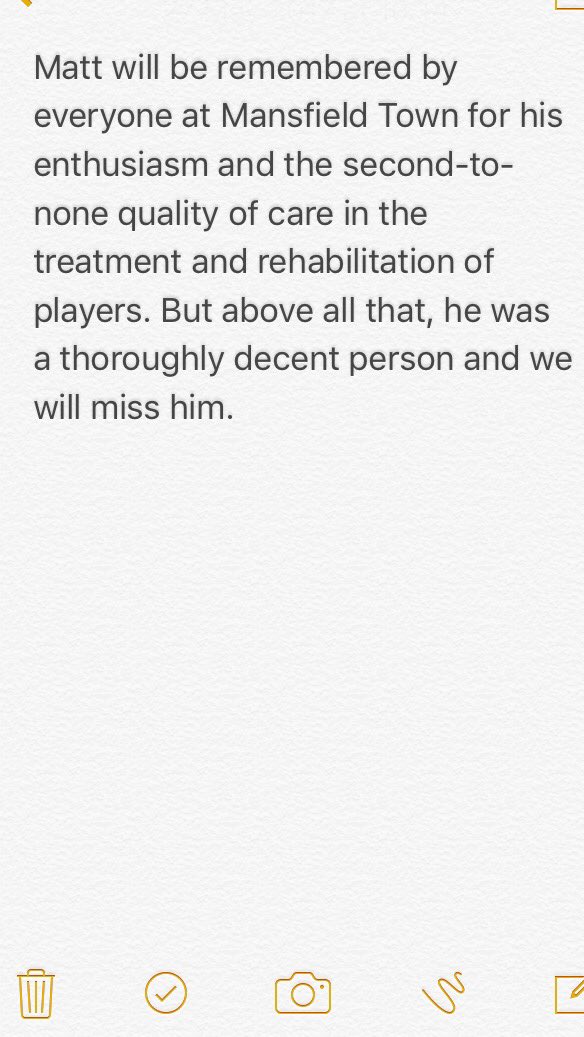 The Football Association are carrying out an investigation to ascertain whether a Mansfield Town striker urinated in front of supporters.

Mansfield Town boss Adam Murray hit back at local reporters, by putting his son forward at a news conference today.

F/T Mansfield Town 0 - 0 Chesterfield: Neither side can find a way through after a well contested game at the One Call Stadium.

The result sees the Spireites go top of League Two on goal difference.

The chairman of Mansfield Town says the club can reach the Championship.

Thousands of people lined the streets to celebrate Mansfield Town's return to the Football League following a five year absence.

John Radford said: "I think we can get into the Championship and that's my target."

He said: "The amount of people just coming out to show their appreciation is out of this world. You can see what it means to the players and the town what we've done this season."

Skipper Adam Murray said: "It's a proud moment for the town and we see from the turnout today that it means a lot."

Thousands of people have lined the streets to celebrate Mansfield Town's return to the Football League after a five-year absence. The Stags paraded the Blue Square Bet Premier League trophy through the town on an opentop bus. Peter Bearne joined them.

This video shows the open-top bus carrying Mansfield Town players and management on their victory parade after promotion back into the Football League.