Birmingham Road (A45) is closed westbound with heavy traffic due to an accident involving a coach and a car between Pickford Green Lane and B4102 Birmingham Road / Packington Lane in Meriden.

A member of staff at a West Midlands nursery has been arrested on suspicion of possessing child pornography.

The 47-year-old man is employed at Beechwood Childcare’s private nursery based at the Meriden Primary School site in Fillongley Road, Meriden.

The school and the nursery are not linked.

The man, from Chelmsley Wood, was arrested yesterday and computer equipment was seized from his address.

“At this stage of the inquiry, there is no evidence to suggest any inappropriate contact between the worker and children, or that any of the alleged images relate to children who attend the nursery. “The man has been released on police bail - with conditions not to have any unsupervised contact with anyone under 16 and not to access the internet - and inquiries into the matter continue.”

– A spokesman for West Midlands Police

A spokesman for Beechwood Childcare declined to comment on the arrest.

Meriden update: @solihullfire, @wardendfire, @sheldonfire still at scene. We're likely to be there for at least 2-3 more days...

... at least 10 stacks of wood chip to be allowed to burn out under supervision, to avoid excessive smoke pollution from wetting them...

... burning stacks described as 'mini volcanoes' by crews on site.

Fire crews are still dealing with a fire at a recycling plant in Meriden in Warwickshire which broke out on Friday night.

The fire at Cornets End Lane, at A&A recycling Ltd, involved around 6000 tonnes of waste wood and chippings.

Two fire engines are still at the plant and water is being delivered as the fire is still not completely out.

Fire Control are still receiving calls to the large fire in Meriden. We still have a number of crews in attendance dealing with the incident

Meriden fire, crews still in attendance, smoke will be seen in the area, progress being made, further update mid morning.

Fire crews are damping down a blaze at a recycling plant in Meriden in Warwickshire which broke out on Friday night.

The fire at Cornets End Lane, at A&A recycling Ltd, involves around 6000 tonnes of waste wood and chippings.

Fire at Cornets End Lane, Meriden is at A&A recycling Ltd not LaFarge Tarmac as previously reported. Smoke will be in the area for some time

West Midlands Fire Service originally tweeted that the blaze was at the granite quarry next door to the recycling plant, but last night corrected the earlier error, after quarry operator LaFarge Tarmac issued a statement.

Read: LaFarge Tarmac confirm fire was not at its quarry

LaFarge Tarmac has this afternoon confirmed the fire reported to be at its quarry near Meriden in Warwickshire, was in fact at a neighbouring recycling plant.

Earlier today West Midlands Fire Service tweeted its crews had been dealing with a blaze involving a large pile of wood chipping at the quarry itself.

In a statement, a spokeswoman form LaFarge said:

Media coverage today has incorrectly stated that there was a fire overnight in Lafarge Tarmac's Meriden quarry in Warwickshire. The fire was in fact at an adjacent site. Lafarge Tarmac's site is unaffected. We are assisting the fire service who pumped water from our site to tackle the fire.

Currently dealing with a large fire at LaFarge Meriden involving wood chippings. In excess of 16 fire engines are in attendance

Around 80 firefighters have been dealing with a large blaze at a granite quarry in Meriden.

Sixteen fire engines were sent to bring the flames under control at the site owned by LaFarge Tarmac, which involved wood chippings and waste material.

West Midlands Fire Service Area Commander Simon Shilton has been tweeting pictures throughout the night, including shots of aerial mapping tools crews have to help them tackle large fires of this kind. 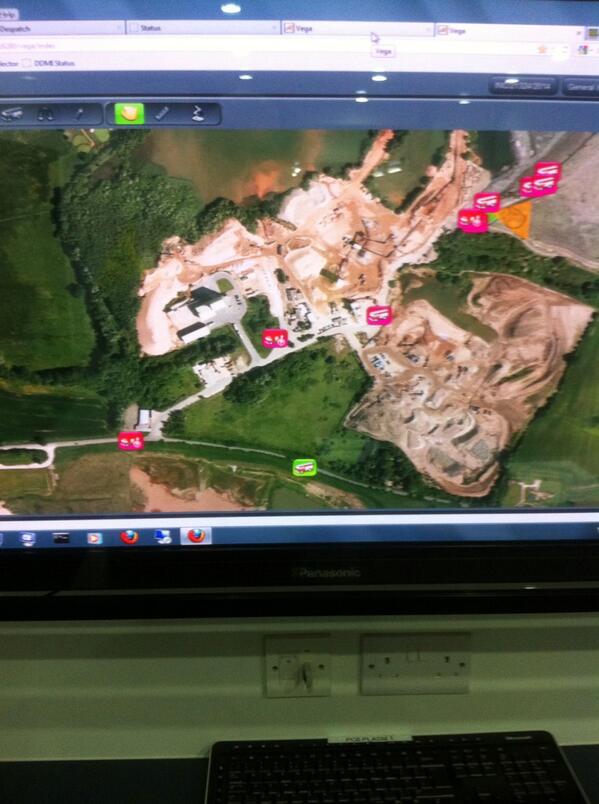 Residents in Meriden say the land occupied by travellers until April last year has now improved.

Protesters have gathered at a public inquiry into an appeal made by travellers in Meriden, near Solihull.

The travellers want to overturn a decision by Solihull Council to refuse them permission to develop land they own in Eaves Green Lane.