The 18-year-old has withdrawn from Nottingham Trent University after being told the only available accommodation was in Derby.

Research at Nottingham Trent University helped develop the technology to measure and record the levels of noise which soldiers experience.

Nottingham Trent has been named as the Modern University of the Year by The Times and the Sunday Times in the Good University Guide 2018.

Animal welfare groups have criticised researchers who attached so many trackers to a hedgehog it was unable to curl up and later died.

With 8 days to go before we go to the polls in the EU referendum, a survey has shown young people are pro European Union, but less likely to bother voting, so we asked students at Nottingham Trent University for their views on staying in, or leaving, the European Union.

England and Notts County Ladies goalkeeper Carly Telford will launch a campaign later today to encourage women to get involved with sport.

The Ending Female Genital Mutilation Together Conference will look at how to protect vulnerable young women and children at risk.

Loughborough University had a particularly successful evening - it was named WhatUni's 'University of the Year', and also took back a series of other trophies.

The poll ranked the University of Nottingham top for job prospects, with Loughborough coming third in that category.

Students who voted thought that Loughborough had the best student union, too, with Nottingham Trent University coming in third place.

Students at Nottingham Trent University were considered to enjoy the second best 'city life' after Bristol.

Loughborough was considered to have the third best student support services, while Nottingham Trent came sixth in that category.

"We are delighted that our students took time to vote and to know that they rate the Loughborough student experience so highly.

"The award is an opportunity for all members of the University community to celebrate and for me to thank everyone for their contribution to our success.”

Nottingham Trent University has been left embarrassed after prospective students were told they had not achieved their expected grades yesterday - a day before A-level results day.

The university sent out 30 emails telling applicants they had got a place despite not getting their predicted results.

In a statement, the university said:

The issue was identified and resolved very quickly. The emails, which did not disclose any results, were to offer applicants a place on a similar but alternative course.

All four falcon chicks have officially hatched! Here they are enjoying breakfast in the sunshine http://t.co/Tu53ZLuLGJ 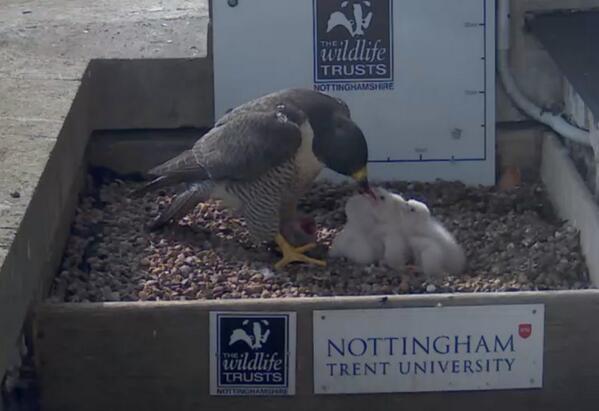