A second student in the East Midlands has been named as one of those killed in the Malaysian Airlines MH17 plane crash.

20-year-old Ben Pocock had just completed the second year of his International Business BSc degree at Loughborough University and was travelling to Australia for a work placement.

The father of a student from Leicester who died in the Malaysian Airlines flight MH17 crash says he is 'beyond devastated'.

20-year-old Richard Mayne, who was a former pupil at Dixie Grammar School in Market Bosworth, was among hundreds of people who were killed when the plane came down.

When I first saw it on the news, my heart dropped. I just thought, oh god, oh god – I couldn't believe it. We were hoping and praying he had fallen asleep and missed his flight. You think you’ve got problems and them something like this happens and it all just takes over. I can’t even bring myself to look at a photograph of him. We are beyond devastated. It is such a beautiful sunny day but our lives have been torn apart.

University student Richard Mayne from Leicester has been named as one of the nine Britons on board the Malaysia Airlines plane that crashed in Ukraine.

The experienced traveller visited Nepal last year to work with underprivileged children and had trekked to Everest to raise money for charity.

The 20-year-old is originally from Leicester where he lived with his parents.

Hearts go out to the friends & family of Richard Mayne, a popular clubman taken from us too soon. We pay tribute to an honest and kind man

Tributes have been pouring in for a university student from Leicester who died when Malaysian Airlines flight MH17 crashed in eastern Ukraine.

Richard Mayne was among hundreds of people who were killed when the plane came down.

There are unconfirmed reports it was shot down with a missile. 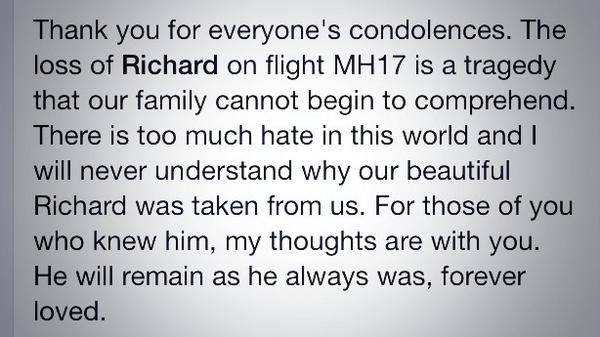 Please come back matey. One of the boys and always will be #foreverandalways

The tributes to Richard Mayne are heartwarming. A lad who is unanimously well respected and loved. #BozzyBoys

A university student from Leicester has been named as one of the British nationals who died when flight MH17 crashed in eastern Ukraine.

Richard Mayne, who was studying maths and finance at Leeds University, was one of 298 people who were killed when the plane came down.

The cause has not yet been confirmed but there are reports it was shot down by a missile.

The 20-year-old is originally from Leicester where he lived with his mother Elizabeth and father Simon.

He also leaves behind his brothers Thomas, 24, and William, 19, and sister Scarlett.

1/3 I've just recently been released after being detained by Ukrainian authorities at #Mariupol yesterday. Was then transferred to ...

2/3 Zaporozhye where I stayed the night, under armed guard. Removed by armed guard today, questioned thoroughly on my work for @rt_com

3/3 All my work in order, no charges, no deportation, no one laid a hand on me in anger, Ukrainian authorities treated me fairly. All ok.

A journalist from Nottingham who was being held by the security forces in Ukraine has been released.

Graham Phillips is working as a stringer for Russia Today, was detained by the National Guard at a check point in Mariupol earlier this week.

But last night he tweeted he was safe & well.

There are reports a blogger from Nottingham has been detained by security forces in Ukraine.

Graham Phillips is working as a stringer for Russia Today, and its website claims the blogger was detained by the National Guard at a check point in Mariupol.

The 35-year-old is originally from the East Midlands, but went to secondary school and University in Scotland.

it comes as security forces and Russian troops continue to clash along the eastern border of Ukraine.

Ukrainians from the Midlands marched from Lancaster Gate to the Russian Embassy in London in protest over Russian involvement in Ukraine.

Ukrainians from Nottingham, Birmingham, Coventry and Wolverhampton are travelling to London today to take part in a march against what they say are the illegal actions of the Russian president in Ukraine.