The party that polled four million votes in 2015, has chosen not to contest almost half of all constituencies in the North West of England, and it could be disastrous for Labour.

UKIP won’t be fielding candidates in 33 of the 72 seats in the region, despite standing in all of them last time and winning thousands of votes in each, in some cases more than the size of the winners’ majority.

Why? Well UKIP don’t have the money they used to, and putting up candidates in 650 constituencies is an expensive business. In areas like Liverpool, Manchester and Westmorland & Lonsdale, the party simply has no chance of winning.

But the main reason is tactical.

UKIP is standing aside in seats where there is a Eurosceptic, Brexit-supporting Conservative candidate being challenged by a Remain-supporting Labour candidate. The party has come to the conclusion that it is pointless using resources to compete against Tories they essentially agree with, if doing so would increase the chances of a pro-EU candidate being elected.

For Labour, it’s a potential disaster. It is the Conservative Party most likely to mop up that UKIP vote.

At the recent local elections, Tory vote share rose as UKIP’s fell. Professor Stephen Fisher of Oxford University is part of the team that produces the ITV, BBC and Sky News exit poll. Writing in The Times, he said that although in 2013 and 2015 many UKIP voters came from Labour, the polls consistently show “there is only one place former UKIP voters are now going and that is to the Conservatives.”

Take Copeland in West Cumbria as a recent example. In 2015 Labour won the seat with the Tories finishing second with 36% of the vote, and UKIP third with 15.5%. But at the by-election in February 2017, UKIP’s vote share fall by 9% and the Tories went up by 8.5% - enough to see them beat Labour, who’s vote share fell 5%.

Now it is not as straightforward as saying every UKIP vote went to the Conservatives, and Copeland is an unusual seat for reasons I’ve written about before, but that is clearly the direction of travel.

The Green Party has followed suit and opted to stand aside in seats in order to help the Labour candidate, including Chester. The Green vote though is nowhere near as substantial as UKIP’s in the seats in question, and in Chester they didn’t stand in 2015 either.

UKIP’s absence is potentially damaging for the Liberal Democrats too in their target seats of Cheadle and Hazel Grove. Tim Farron’s party lost those seats to the Conservatives in 2015 where UKIP polled 4423 votes and 5283 votes respectively.

Manchester-based political consultancy firm Election Data however argues it is “too simplistic” to argue UKIP’s absence means only the Conservatives will benefit:

The lack of UKIP candidates in Labour seats isn't such a bad thing for Labour. UKIP drew votes from Labour in a lot of Labour-held seats between 2012 and 2015 and some more since.

“Labour (votes) to UKIP to (the) Conservatives is happening but not (we’ve) seen convincing evidence that is the case. That vote has to go somewhere of course. The options are 1) back to Labour, 2) Stay at home, 3) the Tories or 4) Another party.

“How that breaks will decide the impact of UKIP not standing and the net effect may hurt Labour of course. But it's simplistic to believe it's going to lose seats for Labour without understanding how those votes break”

Election Data also argues that “the removal of UKIP from the ballot paper provides Labour candidates with some clarity of purpose. "Us vs the Tories" concentrates the minds of voters in a lot of Labour heartland seats. Without UKIP on the ballot paper voters are almost being challenged to vote Tory. For many Labour voters that's still a step too far.”

Then there is the obvious question over the future of UKIP as a major political party.

They have achieved what the party set out to achieve - Brexit.

They have no MPs, they will soon have no MEPs once we leave the European Union, they are losing councillors and plummeting in the opinion polls.

Choosing not to contest half of all seats in a major region of the north of England undermines UKIP's leader Paul Nuttall claims that his party is now the main opposition to Labour in swathes of the North.

It is hard to see where UKIP goes from here. 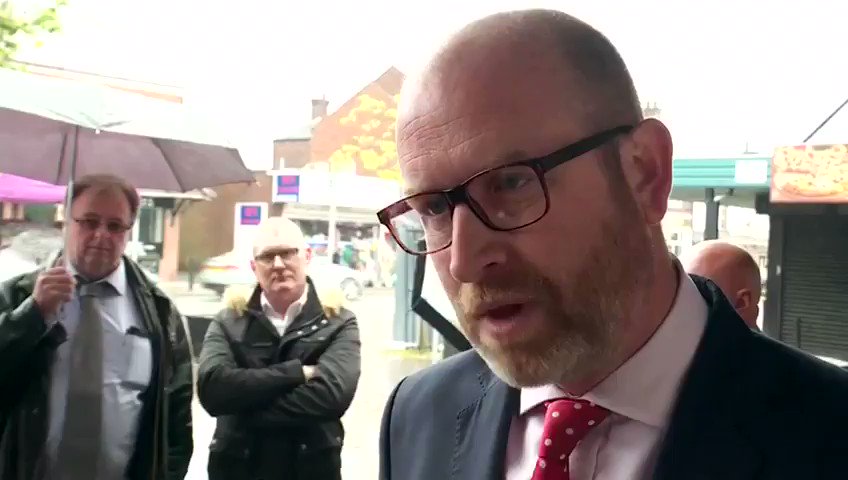 Here is the list of constituencies where UKIP is not fielding a candidate: