Ryan Giggs has all the credentials to successfully manage Manchester United next season, according to his former team-mate Louis Saha.

Giggs has been placed in charge of the team until the end of the season following the sacking of David Moyes.

Saha, who played alongside Giggs for four years, thinks the Welshman is good enough for the position now.

Speaking at the launch of the Soccerex global convention in Manchester, Saha said: "He can do the job now, for sure.

"It seems like an easy choice for now because he proved he can do it last weekend."

Louis van Gaal’s decision to postpone the announcement of the Dutch preliminary World Cup squad has fuelled speculation he will be appointed as Manchester United manager in the coming days.

The former Ajax, Barcelona and Bayern Munich manager has been the favourite to take over at United since Moyes was sacked last week.

The 62-year-old was due to announce his squad on Friday, but the Dutch FA revealed that has now been put back to Monday.

Stoke manager Mark Hughes drew comparisons with his own exit from Manchester City when asked to comment on David Moyes' dismissal by United.

"It's very difficult when a huge decision at a big club is made in this day and age to keep it quiet. Somewhere, someone knows about that situation.

"It's very similar to the situation I found myself in when I was relieved of my duties at Manchester City. Everybody knew the morning of the day I was getting sacked.

"You've just got to be really professional and get on with your job, and until somebody actually tells you the role is no longer yours, you do it to the best of your ability. That's the way I approached it.

''It won't be easy for David. This week will hurt and it will hurt for quite some time I would suggest. It affects not only you but your family and people close to you. Sometimes people forget that."

On Giggs: "I wish him well. He's come out and said he's very proud to be in the situation he finds himself and I can understand that totally because United blood runs through his veins.

''It's all he's known so for him to have the opportunity to manage the club that he's served so professionally and so remarkably, it's a huge thing for him.

"Ryan has a way of getting his view across. He was always a player that led by example anyway. What he will have is total respect from everybody at United.

"It's probably the right appointment, the only appointment given the week that Manchester United have had. It makes total sense. The knowledge and understanding of the place that he has is invaluable for them at this moment in time."

The League Managers' Association and Manchester United are pleased to confirm that terms of settlement have been agreed between the Club and David Moyes in respect of the termination of his employment.

A settlement agreement is in the process of being finalised. No further comment will be made in relation to this issue.

Chelsea boss Jose Mourinho has categorically ruled out the prospect of a move to Manchester United while his successor at Real Madrid, Carlo Ancelotti, has also distanced himself from a return to England.

Mourinho has often been linked with Old Trafford throughout his hugely successful career and was touted as a possible successor to Sir Alex Ferguson as the years wound down on the Scot's career.

Now there is a vacancy at United for the second time in 11 months, but Mourinho, who returned to Chelsea last summer after a near six-year absence, is adamant he is not a contender to succeed David Moyes.

"Of course not," Mourinho said.

"I left Real Madrid to come specifically to Chelsea, I signed a four-year contract with Chelsea.

"I told Chelsea that they never have to worry about me because I don't want to leave. I stay here until the club wants me to stay.

"(No) job would move me from Chelsea."

Mourinho expressed regret at Moyes' departure earlier this week and has since spoken to the former Everton boss.

"I spoke with David privately and I don't have to share with you," Mourinho added.

Meanwhile, Real boss Ancelotti is similarly adamant he will not be leaving Spain to replace Moyes.

The Italian, well known to English fans after a successful stint with Chelsea, has been linked to the role.

He is a popular figure in the Spanish capital, though, and could, over the coming weeks, add the Champions League and Primera Division titles to the Copa del Rey he has already won.

Speaking at Los Blancos' media conference ahead of their clash with Osasuna he said: "I'm happy here at Real Madrid. I am lucky to be working at the best club in the world and my place is here.

"I respect Man United a lot. I was disappointed for David Moyes, but my place at the moment is here."

Ancelotti, 54, is a renowned coach around the world, having won the Champions League and domestic honours with AC Milan, while also winning titles with Chelsea and Paris St Germain.

Ryan Giggs has given his first press conference as Manchester United's temporary manager and said he wanted to put a smile back on the faces of their fans.

Watch: Giggs jokes about giving himself a new contract

He added that becoming the club's boss was the "proudest moment" of his career.

Ryan Giggs joked that one of his first decisions as temporary Manchester United boss was to reward himself with a new five-year contract.

When asked by a journalist whether the Welshman would consider selecting himself to play, the club's longest-serving player replied: "Well, I've just given myself a five-year contract. I'm using my power while I can." 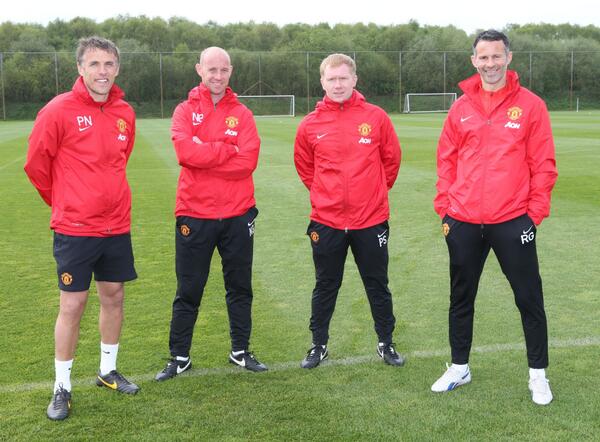 Ryan Giggs said it has been a "whirlwind week" after he replaced David Moyes as Manchester United boss and thanked his former manager for giving him his first chance in coaching.

The club's longest-serving player took his first press conference as Manchester United's temporary boss today and said: "I am proud to be managing for the four remaining games at the club I've supported all my life and been associated with for 25 or 26 years."

Giggs, who joined the club's coaching team in the summer, added: "It's been a difficult week and was a shock to me on Tuesday when I spoke to [executive vice-chairman] Ed [Woodward] and he informed me David was leaving and asked me to take over - it's been a whirlwind week for me."

He said he wanted to "bring back the smiles on fans faces" and joked that he has rewarded himself with a new five-year contract.

Ryan Giggs has thanked Manchester United's fans, staff and players for their response to him taking over as manager.

Speaking to MUTV he said: "I've had great support from the fans, the staff and the players. I have had so many well-wishers. I hope in these four games we will do well.

"I want to win four games. It's important that we have European football at Old Trafford next season."