The Olympian Tweeted a picture of herself from her hospital room in Austria with the caption:

"Hi everyone, I just wanted to let you know the good news that I am being discharged from hospital today."

The parents of Olympic athlete Beth Tweddle have spoken of the 30-year-old's surgery and recovery and have thanked the production team at The Jump and well-wishers.

Beth was injured last weekend when she hit a tree while training for Channel 4 programme The Jump.

Her parents, Ann and Jerry, said:

“The medical staff here in Austria have been fantastic, they have been so helpful, patient and incredibly attentive. We cannot thank them enough for what they’ve done for our daughter.

"Our thanks also go to the production team who have been helping and supporting us, and everyone who has sent a get well message to Beth. We’ve been reading every message to her and it really does make a difference knowing that there are so many people wishing her well. Thank you for your support.

"Since her surgery, Beth has managed to walk a few steps whilst being assisted by the nursing team. She is still very tired from the operation but the medical team are pleased with the progress she is making. At the moment we aren't certain of the timescale for her recovery. We are taking each day as it comes and will update you when there is further news.”

Channel 4 has asked its producers to review safety procedures after the Chester gymnast Beth Tweddle suffered a serious neck injury while filming the entertainment show The Jump.

The programme features celebrities competing in a variety of winter sports, including ski jumping.

The athlete has undergone surgery on fractures to her neck.

Channel 4 have made a statement about Olympian Beth Tweddle being seriously injured on its show The Jump.

"The Jump is now in its third series and since launch 46 celebrities have taken part successfully. Though it is a new course the events have been designed to be no more difficult than in previous years and all contributors have undertaken a rigorous training programme to prepare them for the show.

" All winter sports carry some element of risk but in light of the number of injuries this year, Channel 4 has asked the producers to review safety procedures again to further reduce the prospect of accident."

The 30-year-old, from Cheshire, perfectly executed a ski jump during training, but crashed into a barrier on landing.

Last night, Beth had surgery to fuse fractured vertebrae in her neck and is currently recovering in hospital in Austria.

Olympic gymnast Beth Tweddle and her parents has spoken about her being airlifted to hospital, after suffering a serious injury on Channel 4's reality show, The Jump.

The 30-year-old, from Cheshire, perfectly executed a ski jump during training, but crashed into a barrier on landing.

Last night, Beth had surgery to fuse fractured vertebrae in her neck and is currently recovering in hospital in Austria.

"The early medical indications were positive as Beth was able to move her hands and feet, despite being in a lot of discomfort. The medical staff have been fantastic and explained to us that Beth was waiting for an operation as there were more serious cases ahead of her.

"At 8.00pm last night Beth was taken down for surgery where they took a piece of bone from her hip and used it to fuse the two vertebrae that were fractured, along with pinning them together. It was a scary time for all of us and we’re just very grateful that the operation was a success."

From her hospital bed in Austria Beth said:

"Thank you so much for your support and concern. The last 48 hours have been very scary but all the messages have really helped to keep me positive. I will keep you updated on my progress.”

A Channel 4 spokeswoman confirmed that Tweddle had been taken to hospital with a back injury, but declined to comment on reports she would need surgery.

"The health and safety of the competitors is always paramount and Beth was immediately taken to hospital for treatment after hurting herself during training."

An update on Beth... https://t.co/UEprlA7VEV 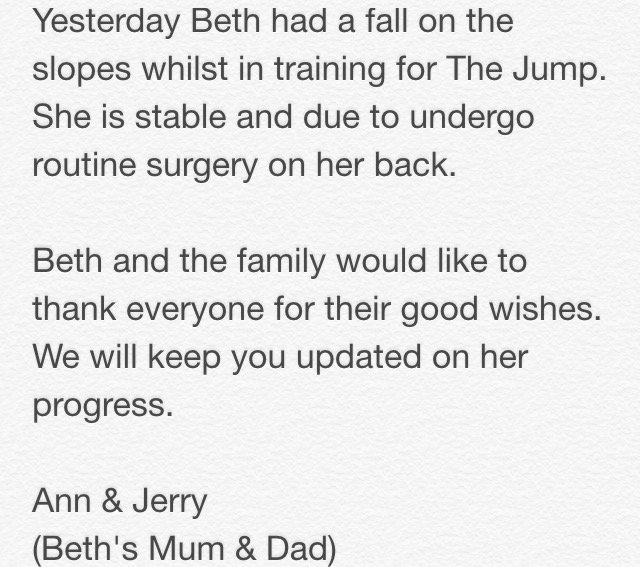