A rocking horse signed by Sir Paul McCartney will be auctioned to help Liverpool children. Proceeds will go towards the Alder Hey fund

The contract that launched The Beatles' career could fetch up to half a million pounds when it goes on sale for the first time.

It is the only management contact signed by the final Beatles line-up (John Lennon, George Harrison, Paul McCartney and Ringo Starr) and their manager Brian Epstein.

It was signed by them all on October 1 1962, just four days ahead of the release of their first single Love Me Do.

The document will be up for grabs at Sotheby's "Rock & Pop" sale.

"Without this contract, and the relationship it represents, it seems inconceivable that the Beatles could have achieved all that they did: it took more than inspired musicianship and song-writing to remake popular music.

"The presentation, direction, and internal harmony of the Beatles all owed a huge amount to Brian Epstein. He was, as Paul McCartney has acknowledged, the Fifth Beatle."

A signed 'luv cilla' handkerchief will be placed up for auction later this month as part of a collection of Beatles memorabillia. It's just over a week since Cilla Black passed away at her villa in Estepona. The auction will be held in the Paul McCartney Auditorium at the Liverpool Institute of Performing Arts on the 29th August.

Sir Paul McCartney was back on stage last night after recovering from a virus which left him hospitalised in Tokyo.

The former Beatle performed in Albany, New York, after a two-month recuperation.

He later tweeted that it was an "incredible night". 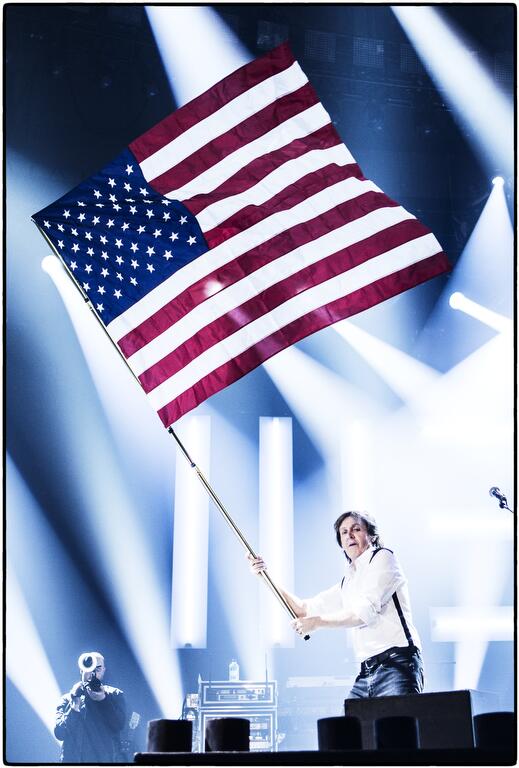 Rare jackets worn by George Harrison and Ringo Starr during the making of the 1965 Beatles' film Help! sold for more than £50,000 apiece today.

A piano used in the movie - which Sir Paul McCartney worked at while composing the classic song Yesterday - fetched a similar sum.

The jacket worn by Harrison sold for £54,000 including buyer's premium and the one worn by Starr fetched £61,100, both to UK collectors.

The 1907 Bechstein Concert Grand piano sold for £57,500, to a South American collector.

Overall the sale of more than 200 lots of rare Beatles' memorabilia, hosted by Omega Auctions at the Adelphi Hotel in Liverpool, fetched £264,375, including buyer's premiums. It was held to coincide with the 50th anniversary of the release of The Beatles' number one hit Can't Buy Me Love.

A Beatles fan from the United States is in Liverpool to buy pieces of rare memorabilia.

He told ITV News the long journey was more than worth it.

Jackets worn by two of the Beatles during the 1965 film Help! are going on sale this afternoon.

The items are expected to fetch up to £30,000 each and are among 200 lots going under the hammer in Liverpool.

Other collectibles include the piano used to pen the hit song and some hair clippings from the band.

Auctioneer Paul Fairweather says there has been interest in the sale from across the world.

Jackets worn by George Harrison and Ringo Starr in the filming of The Beatles 1965 film Help! are to go up for sale.

They're expected to fetch up to £30,000 each and are among 200 lots going under the hammer in Liverpool including the piano used to pen the hit song and some hair clippings from the band.

The items were part of the film's director Richard Lester's private collection. The jackets were worn throughout the five days of filming in the Alps and also feature on the iconic album cover of the soundtrack.

The 82 year old director, was one of the most influential directors of the 1960s, directing The Beatles first film 'A Hard Days Night', 'Help!' and Superman during the 1980s amongst others.

The sale is part of an auction of over 200 lots of rare Beatles memorabilia and vinyl records to be hosted by Omega Auctions on 20th March 2014 at the Adelphi Hotel in Liverpool to coincide with the 50th anniversary of the release of The Beatles number one hit "Can't Buy Me Love".

Auctioneer Paul Fairweather says "as Beatles clothing goes these have got to be amongst the Holy Grail for any Beatles collector. They feature on one of their most recognisable album covers and I have a feeling these could really fly off the block!".

A leather jacket owned by Beatles' star George Harrison could fetch £120,000 when it is sold at auction.

The collection, on sale at Bonhams auctioneers in London, was gifted by George Harrison to his brother Harry and other members of the family.

Also up for sale is his bespoke orange western style shirt designed by Nudie’s of Hollywood, identical to that worn during the landmark ‘Concert forBangladesh’ in 1971.

Sir Paul Mccartney has been presented with France's highest public award. The former Beatle was given the Legion of Honour by President Francois Hollande at a private ceremony in Paris. It's usually given to French nationals.