The tweet was posted shortly after the Reds threw away a three-goal lead to draw 3-3 with Palace at Selhurst Park on Monday night.

Referring to Newcastle United's collapse in the title race in the 1995-96 season, the post said : "Brutal but very funny. The biggest capitulation since Newcastle in the 90s."

Spurs deleted the tweet but here's a screen grab http://t.co/szIW20Qgjn 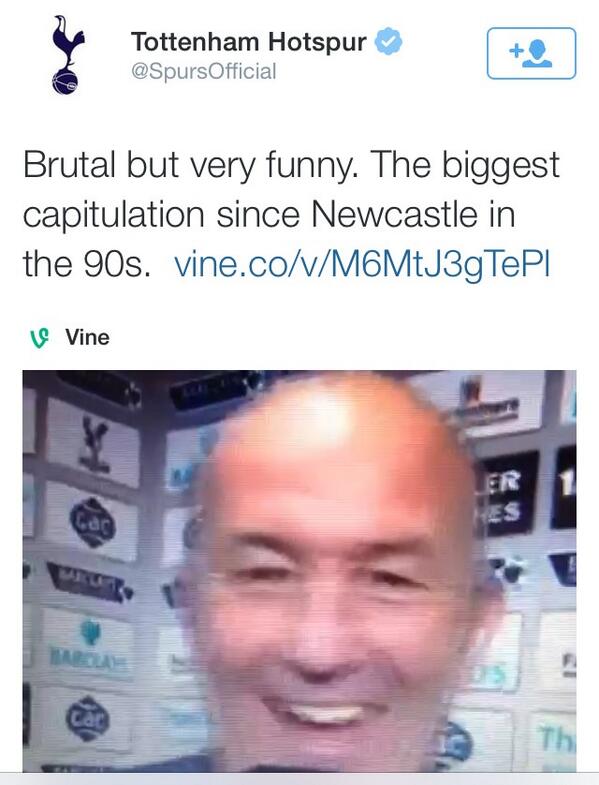 The post was accompanied by a Vine video which featured Liverpool captain Steven Gerrard giving an motivational team talk after their victory over Manchester City followed by his slip which gifted Chelsea their recent 2-0 win at Anfield.

Dwight Gayle's equalising goal for Palace was next before a clip of manager Tony Pulis laughing in a previous interview ended the sequence.

The tweet was swiftly deleted but social media users had already taken screen grabs of the post.

Spurs apologised to anyone who as offended and said they were investigating the security breach.

We apologise to anyone offended by a recent tweet, which was immediately deleted. This post was not tweeted by anyone affiliated to THFC.

We are currently looking into a security issue where our official Vine account has been compromised.

Liverpool eased into a 3-0 lead, but the hosts staged a stunning comeback after two goals from Dwight Gayle and a Damien Delaney strike.

The draw means Liverpool are still top of the Premier League but City are just one point behind with a game in hand.