Hendy says some air cooling units were blowing hot instead of cold air and some fans didn 't work. @itvlondon

CLEARED: Trains are no longer being affected by the disruption between Clapham Junction and London Waterloo. #SWTspeed

In an article posted on the company's website, South West Trains explained why the heat was affecting their services.

Very hot weather can have an impact on the train service we can deliver. As with all metals, the track we use to run our trains expands and contracts depending on its temperature, i.e. the hotter it gets, the more it expands. Just like a car on a warm day, the metal can reach temperatures far in excess of the surrounding air temperature.

Whilst we carry out a significant amount of work to prepare for the impact of hot weather by using hydraulic machines to artificially stress the rails to cope with high temperatures, over the weekend we have seen temperatures on our tracks of almost 50oc. The ageing condition of our infrastructure has meant that despite the preparation work that has taken place, we have had to impose speed restrictions at certain locations on our network

South West Trains says that the speed restrictions have now been lifted, but that the delays will continue for a couple of hours.

Apologies to all affected by the speed restrictions between Waterloo and Clapham Jn today. These have now been lifted although residual..

...delays are expected for the next couple of hours. We are not anticipating the speed restrictions being imposed again tomorrow,

The concourse at Waterloo was packed with frustrated commuters this evening, as services were affected by the hot weather.

South West Trains put speed restrictions in place between Clapham Junction and Waterloo - because the tracks were struggling to cope with surface temperatures approaching 50 degrees Celsius.

Trains were limited to 20 miles an hour, with many services delayed, cancelled or altered.

We've recorded the temperature onboard a 38 bus between Grays Inn Road/Holborn and Essex Road, Islington this afternoon. Our Political Correspondent Simon Harris's tweets accompany each image.

On Friday, the Mayor Boris Johnson promised to fix the problem, and Transport for London claimed an 'army of engineers' would work throughout the weekend to get the air conditioning working.

Top deck of Boris Bus on No 38 route and the temperature is above 30 deg C. @itvlondon http://t.co/CmnDBPxNsl 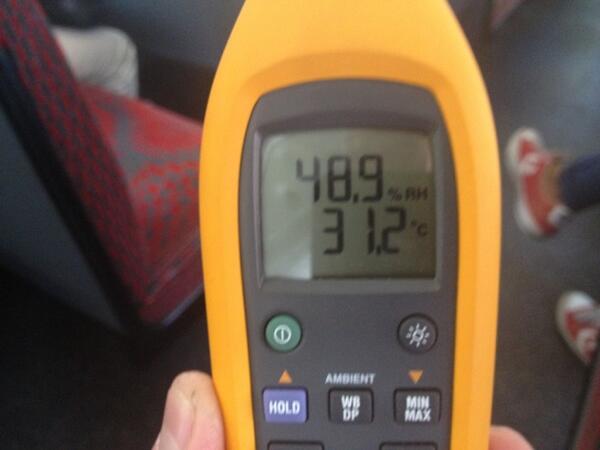 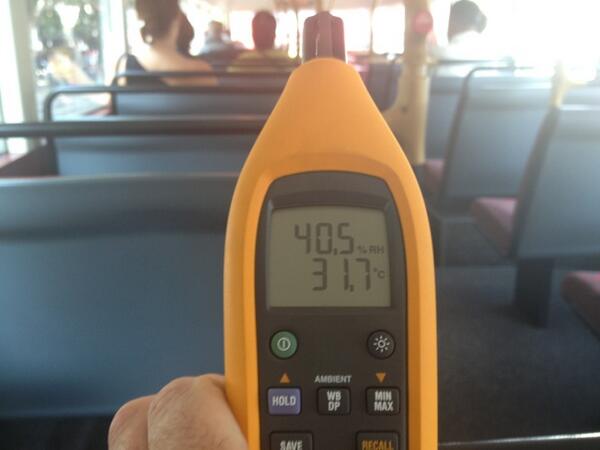 Bizarrely, The further north we go, the higher the temp. @itvlondon http://t.co/MUzq5xmDX2 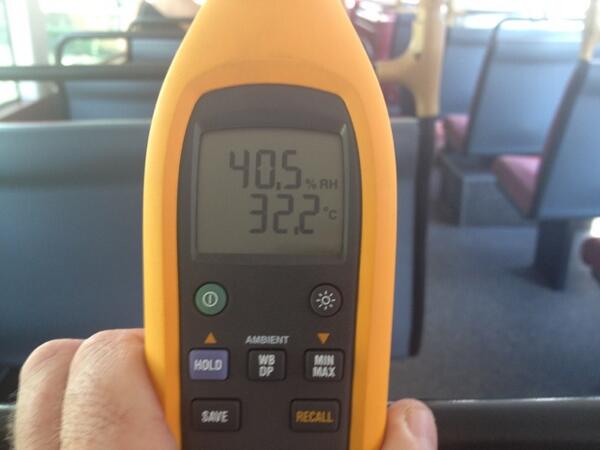 Our correspondent Simon Harris has been onto a Route 24 'Boris Bus' and recorded sweltering temperatures:

TfL says ‘air-conditioning’ is ruled out on buses because the unit would make buses heavier and mean they consume extra fuel making them less environmentally friendly.

Some London buses – including the New Bus - have air cooling, where air is streamed through the upper deck.

TfL says that where vehicles are fitted with air cooling, opening windows detract from the cooling by dissipating the flow of air; so on New Bus for London vehicles the windows don't open.

“We are aware of some technical issues with the ventilation and air cooling system on some of the New Bus for London vehicles on Route 24. Our suppliers are working to fix the issue as soon as possible.

When the air chill system is fully operational we are finding temperature levels are comparable to other buses in our fleet fitted with a similar system.

As you would expect with the introduction of a large fleet of new buses, there will be teething problems and we are working hard to minimise the impact of these on our passengers.”

Mayor Boris Johnson told us that he'd thought the problem was fixed...