It was reported that Chelsea would demand a significant fee from the Spanish side if they were drawn together to allow the 21-year-old to play but the European football body said it expects Courtois to face the London side.

"Both the UEFA Champions League and the UEFA disciplinary regulations contain clear provisions which strictly forbid any club to exert, or attempt to exert, any influence whatsoever over the players that another club may (or may not) field in a match," a statement read.

"It follows that any provision in a private contract between clubs which might function in such a way as to influence who a club fields in a match is null, void and unenforceable so far as UEFA is concerned.

"Furthermore, any attempt to enforce such a provision would be a clear violation of both the UEFA Champions League and the UEFA disciplinary regulations and would therefore be sanctioned accordingly."

Chelsea will face Atletico Madrid in the semi-finals of the Champions League.

The Blues are the last-remaining English side in the competition after beating Paris Saint-Germain on away goals on Tuesday.

Bayern Munich will play Real Madrid in the other tie.

The final of the competition will be held at Benfica's Estadio Da Luz in Lisbon on May 24.

Chelsea will find out who they will face in the Champions League semi-finals during Friday's draw in Switzerland.

Jose Mourinho insisted his run down the touchline during Chelsea's 2-0 win against PSG was not to celebrate Demba Ba's winning goal but to give his players tactical advice.

The Portuguese manager ran down the touchline in scenes reminiscent of when Porto knocked Manchester United out of the competition at Old Trafford in 2004.

"No, it was not to celebrate. It was to tell the players how we have to play the last 10 minutes," a smiling Mourinho said.

"I had to go there because I knew it would be the only chance I'd have to tell Demba, Fernando [Torres] and Schurrle what we have to do in the last seven minutes.

"It was not to celebrate, but you could see that I can still run."

Jose Mourinho has hailed Chelsea's "special spirit" after his side overturned a two-goal deficit against Paris Saint-Germain to reach the Champions League semi-finals.

A dramatic 87th minute goal from Demba Ba sealed a 2-0 win that saw the Blues progress on away goals.

"A big opponent is waiting for us in the semi-final, but I think it doesn't matter who," Mourinho said.

"They know that we are a team with a special spirit, even if we are not in the maximum of our potential."

Chelsea have beaten French side Paris Saint-Germain to progress to the Champions League semi-finals after a dramatic comeback.

Goals from Andre Schurrle and Demba Ba secured the Blues a 2-0 win and a place in the last four courtesy of the away goals rule.

Here's the scene inside Stamford Bridge. Not long to go now... #ChampionsLeague http://t.co/G7yeflzlCV 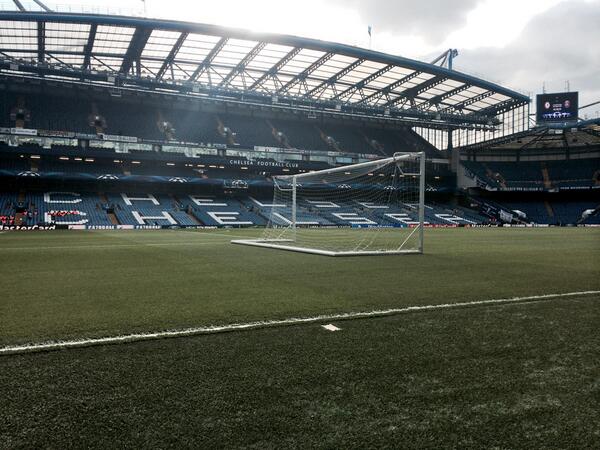 Chelsea must recover from the 3-1 first leg loss in Paris if they are to reach a seventh semi-final in 11 years.

"I believe and my players believe. That's the most important thing."

Chelsea are undertaking their final preparations ahead of their key Champions League match against Paris St-Germain.

The Blues need to overturn a two-goal deficit at Stamford Bridge in order to progress to the next round.