Mervyn Westfield has accepted an apology from Danish Kaneria for the spot-fixing scandal which ended his cricket career.

Piers Morgan claims Kevin Pietersen was offered an "advisory role" at the ECB by Andrew Strauss, despite the new director claiming there are "massive trust issues" with him.

Strauss asked @kp24 last night if he'd consider an 'advisory role' with ECB. Same organisation that doesn't trust him enough to pick him.

I suggest journalists ask Strauss why he offered KP an 'advisory role' with ECB if they don't trust him. Urgently.

"Strauss asked @KP24 last night if he'd consider an 'advisory role' with ECB.Same organisation that doesn't trust him enough to pick him

"I suggest journalists ask Strauss why he offered KP an 'advisory role' with ECB if they don't trust him."

Andrew Strauss stopped short of announcing 34-year-old Pietersen will never add to his 104 Test caps for his adopted country, but made clear that the working relationship between the two of them is central to the decision that has been made.

As Pietersen's Test captain in 2012, Strauss discovered the record-breaking batsman had sent "provocative" texts about him to opposition players from their native South Africa.

The first thing to say is now's the time for some really honest and open conversation about Kevin Pietersen.

No one has ever doubted Kevin Pietersen's ability as a player. He has been a phenomenal player for England over a long period of time.

His record stacks up to anyone in England cricket, and he should be very proud of that. But over months and years, the trust between himself and the ECB has eroded. 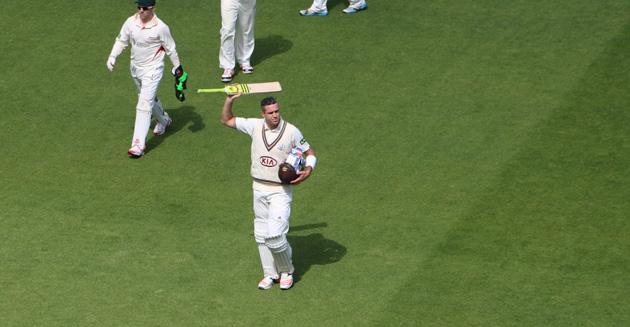 Kevin Pietersen made an unbeaten 355 for Surrey against Leicestershire at the Oval, with Surrey bowled out for 557.

Ironically, the England exile's heroics coincide with new director of cricket for England, Andrew Strauss, explaining why Pietersen does not form part of his future plans.

Strauss played alongside Pietersen throughout his England career and ahead of being unveiled in his new role at Lord's today, confirmed that Pietersen does not form part of any future plans.

"Over a period of months and years, the trust between himself and the ECB has eroded. There's a massive trust issue between Kevin and I."

Middlesex batsman Ryan Higgins might have feared a duck when he came to the crease against Sussex, but he can't have predicted a seagull would cause him problems.

When he connected with a shot in the Twenty20 clash at Hove on Friday, everyone thought it would fly for six.

But it struck a seagull instead and landed just yards away on the ground. The seagull was, apparently, unharmed and the batsmen made just two runs.

For the first time since 1987, spectators will be allowed to watch the match from the outfield in front of the Grand Stand.

Entry requirements for the Ground's Victorian Pavilion - usually reserved for MCC Members - will also be relaxed, with 500 tickets for general members of the public.

And bat-makers Hunts County will be hosting a bat and ball making workshop on the Nursery Ground, where spectators will be able to try their hand at putting together their own cricket bats and balls.

MCC Head of Cricket and captain for the match, John Stephenson, said:

We're delighted that Brian is going to be playing in this match, and it will be a special treat for all those attending to see him bat again. It is fitting that the 200th anniversary of a ground steeped in so much cricket history is going to be graced by one of the greatest batsman to ever play the game. Brian's inclusion adds to what is already going to be a very exciting day with so much entertainment on and off the field, and it would be great to see as many people as possible coming to celebrate the bicentenary of the Home of Cricket.

MCC v Hertfordshire was the first ever match played at the current Lord's Ground on June 22nd 1814.

The Marylebone Cricket Club had previously been based in the Eyre Estate of St John's Wood, but decided to move after plans emerged for the Regent's Canal to be built straight through it.