A marketing graduate who landed his dream job after holding up a placard at Victoria station has gone back to the same spot to give others a helping hand. 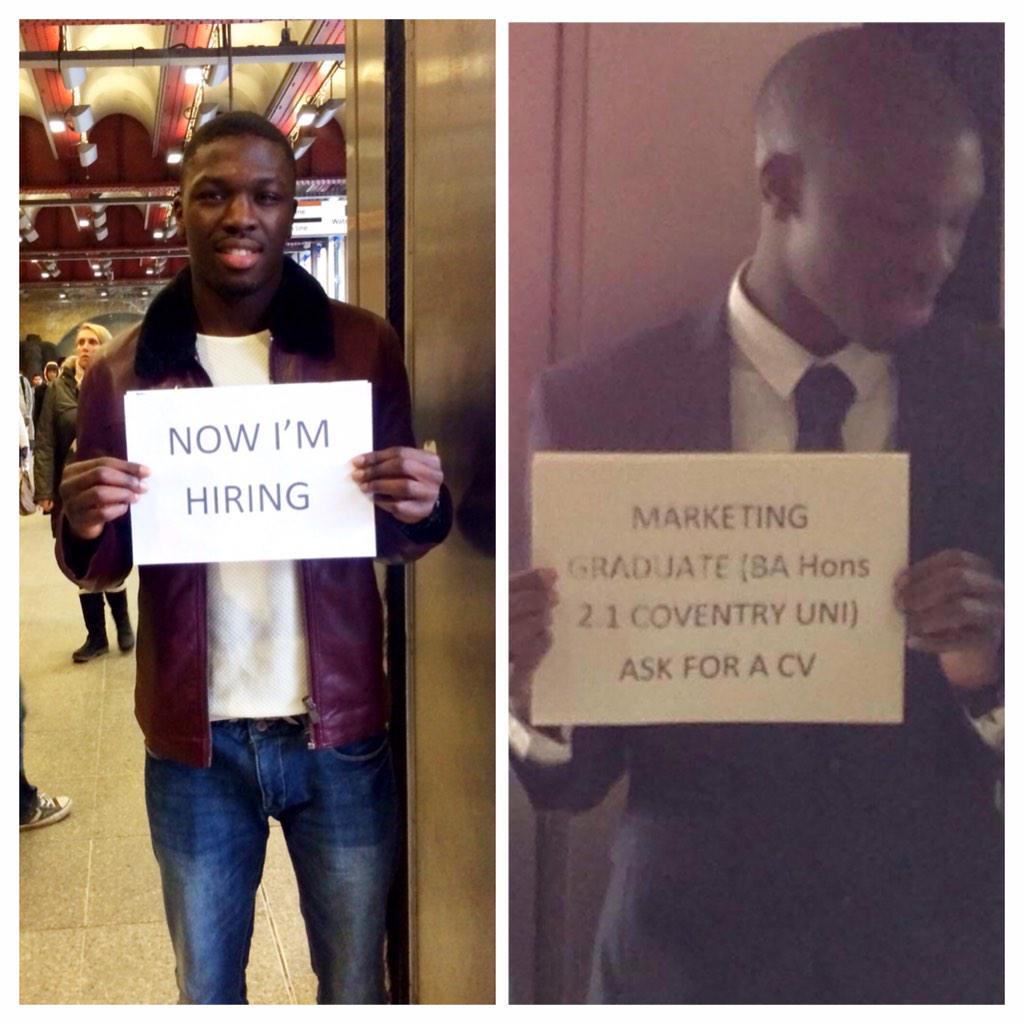 22 year old Alfred Ajani posted the before and after picture on Twitter under the heading "Same spot - different sign". The picture has been re-tweeted hundreds of times and he has been inundated with requests for jobs on the social media site.

Mr Ajani landed a job at a recruitment company in the capital after holding up the original placard in August. He told ITV London at the time that, like many young graduates, he had struggled to find work after university - but the response to his unusual job advert had been "much better than expected", with even the offer of a position in Barcelona.

Just 45% of London's disabled people of working age are in work and a new roadshow hopes to bosst these numbers. The Disability Confidence Roadshow will open today fronted by businessman and Falklands veteran Simon Weston.

The event is designed to increase the confidence of London's employers to recruit disabled people in the capital. Sponsored by Barclays Bank it will be attended by companies and businesses such as GlaxcoSmithKline, Morgan Chase, BP and Morgan Stanley

Mr Weston said 'What I want employers to take away from this conference is that disabled people cane be some of your best employees. We're some of the most determined workers, who go the extra mile to secure results.'

The gap between London and other UK cities is widening and we are failing to make the most of cities' economic potential.

Devolving more funding and powers to UK cities so they can generate more of their own income and play to their different strengths will be critical to ensuring this is a sustainable, job-rich recovery.

While London the economy in London is beginning to boom, it means cities such as Bradford, Blackpool and Glasgow have seen jobs lost in private and public sectors. Here's how London compares to other cities:

The economic recovery is surging head in London, with almost 10 times more jobs being created in the capital than the next best area.

Research by the Centre for Cities think tank shows London now accounts for 80% of national private sector employment growth between 2010 and 2012.

The PR firm says it is looking for a candidate with the following qualities:

A PR firm in central London is looking for new recruits willing to work with "a fat bloke with a drink problem". The bizarre advert by company 'Just In Time', says successful applicants will be on anti-depressants, and not care about global warming, and have spent one night in a police cell.

The company says it has been struggling to fill current vacancies, but has now been swamped with applicants.

There's been another jump in youth unemployment in London as an entire generation struggles to find a job.

Today's figures show the number of 16 to 24-years-olds out of work in the capital is stubbornly high, and at the highest level since 1993. Luke Hanrahan has been to meet the young people who've discovered that having a qualification gives no guarantee of work.

London is the only region of the country to have seen employment rates climb back up to near their pre-recession level, according to a new report.

Think Tank The Resolution Foundation found that rates remain well below where they were in early 2008 for much of the UK despite improved economic confidence.