The QPR manager Harry Redknapp launched an extraordinary rant about his attacking midfielder Adel Taarabt saying the Moroccan was "about three stone overweight". Taarabt is one of the most talented players in the QPR squad but was left out of the team to play Liverpool yesterday. At the post-match press conference, Redknapp went public about his problems with the player:

He played in a reserve team game the other day, and I could have run about more than he did. So no, I can't pick him. I can't keep protecting people who don't want to run about and train, who are about three stone overweight. What am I supposed to keep saying, keep getting your 60, 70 grand a week but don't train?

One of the most famous figures of transfer deadline day appears to have gone AWOL. PA Sport, who've been reporting the transfer gossip all morning, are threatening to call the police if he's not seen in the next hour.

"There's still no sign of Harry Redknapp! It's starting to get worrying now. Another hour and we'll call the police."

In an earlier update, they posted: "It's nearly 11 and we haven't seen Harry Redknapp yet. Where is he? Did Sandra forget to set the alarm?"

And fans on Twitter are calling for his famous 'quote from the window of his Range Rover' shot, seen so many times in previous years.

Deadline day isn't the same without a car window interview with Harry Redknapp! 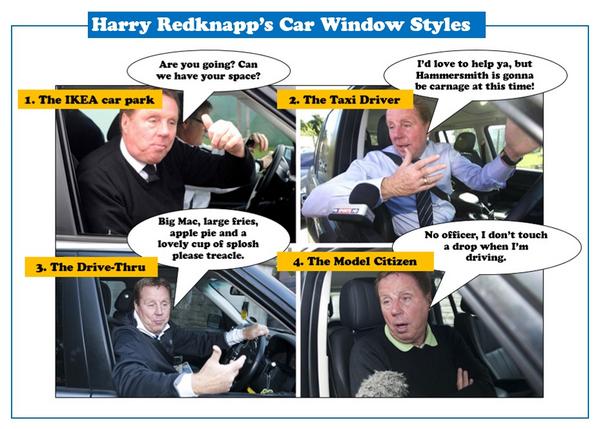 England captain, Steven Gerrard, believes anyone who dodges international duty is wrong and he called on Redknapp to name the players in question. He said: "I don't know who he means. Is it five years ago? 10 years ago? We need names. If it's the case, it's disgusting."

When I was at Tottenham, when full internationals came around, there were two or three players who did not want to play for England.

They would come to me 10 days before the game and say, 'Gaffer, get me out of that game, I don't want to play in that game'. I'd say, 'you're playing for your country, you should want to play'.

(They would say) 'Nah, my girlfriend is having a baby in four weeks, I don't want to play' and that is the truth, so it makes you wonder.

Steven Gerrard has called on Harry Redknapp to name and shame the former Tottenham stars who he claims skipped England duty.

Redknapp claimed some English players asked him to pull them out of national games when he was in charge at White Hart Lane.

QPR manager Harry Redknapp has told ITV News that he believes that only English people should play football for England.

Speaking to Charlene White at a book signing in the capital today, he said he supported England player Jack Wilshere's call for a change in Fifa residency rules. He also criticised the head of the FA saying he hasn't got a clue about football.

QPR manager Harry Rednapp has revealed the club's two new players, Tom Carroll and Matt Phillips, will be part of tomorrow's squad taking on Birmingham. The other two last-minute signings, Benoit Assou-Ekotto and Niko Kranjcar, will still be sidelined as they recover from injuries.

Redknapp did however hint he'd be happy to take Emmanuel Adebayor onboard, if Spurs would loan him out.

The Queens Park Rangers Manager Harry Redknapp said he expects his team to be in contention for promotion back to the Premier League though he has warned it will be tough. QPR start the new season at home to Sheffield Wednesday tomorrow.

Football manager Harry Redknapp could face a trial after pleading not guilty to two motoring offences.

The Queens Park Rangers manager is accused of speeding at 38mph in a 30mph zone on The Avenue in Poole, Dorset, on October 23 last year.

He has also been charged with failing to supply the driver's identity as required under The Road Traffic Act.

Redknapp did not attend a hearing at Bournemouth Magistrates' Court where Jonathan Morrissey, defending, entered not guilty pleas on his behalf.

A spokeswoman for the Crown Prosecution Service confirmed that Redknapp, who lives in Sandbanks, Poole, had been charged with the two offences.

The Bournemouth Echo reported that Charles Nightingale, prosecuting, told the court Redknapp had not been able to ascertain whether he or wife Sandra had been driving the domestically-registered vehicle at the time of the alleged offences.

It said the trial could be dropped if the information is provided.