When she was heavily pregnant Elita Amantova slept on grave stones.

A woman who is being treated in a south London hospital for a haemorrhagic fever has tested negative for Ebola, officials have said.

The patient tested for Ebola has received the results and they are negative for Ebola.

A woman admitted to a London hospital with a "haemorrhagic fever" is to be tested for Ebola as a "precaution," health officials have said.

It has been reported that the patient has a history of travel to West Africa and she presented herself to St George's Hospital in Tooting with a high temperature last night. The woman is currently being treated in isolation from other patients.

A patient has been admitted to St George's Hospital this evening with a haemorrhagic fever and is currently undergoing a series of tests, as a precaution one of which is for Ebola.

The trust has followed national guidance and moved the patient to our clinical infections unit where they are being cared for in isolation, away from other patients. Infection control procedures remain in place while we await the outcome of the tests.

We are confident that all appropriate actions have been taken by our staff to protect the public and the patient.

A car smashed into a beauty salon in south London this morning, ending up wedged in the front window. Police found the car in Mitcham Road in Tooting early this morning, but the driver had fled the scene. 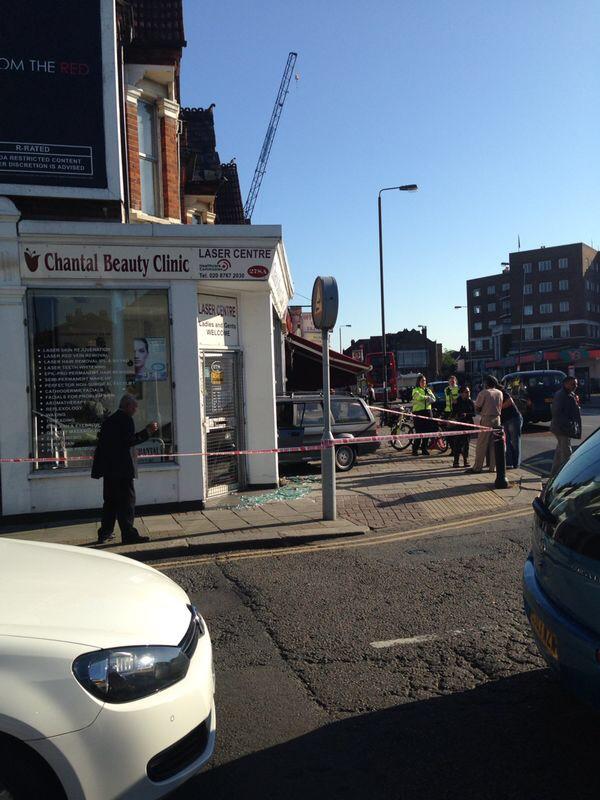 Speaking to the Evening Standard, the owner of Chantal Beauty Clinic said:

Somebody drove a car into the shop, it has damaged everything. I’m in a bad situation right now.

Police are investigating if the car was stolen.

An officer from Surrey's road unit battled to save the girl until paramedics arrived.

Speaking the Evening Standard, Solicitor Heather Atkins, says she is still coming to terms with the attack on her 10-year-old pet dog:

The next thing I knew he snatched Caro, bit into his neck and shook him from side to side.

It was probably no more than a second or two, but Caro went up in the area and dropped onto the ground. He died immediately.

Caro had no chance once the other dog had him by the neck. The vet said his heart stopped immediately.

The woman who owned the other dog just continued talking on her phone. She was not shocked at all and didn’t ask if Caro was ok. She just walked away.

Police are looking for the owner of a Staffordshire Bull Terrier that attacked and killed a small dog in a London park. The Yorkshire Terrier, named 'Caro', was bitten on the neck, shaken in the air and left motionless on the ground.

Two people who were jogging nearby rushed to help the injured dog and its owner, but Caro died almost immediately. The owner of the Staffordshire Bull Terrier and her dog, which is described as ginger/tan in colour, left the scene on Tooting Bec Common.

A paranoid schizophrenic who escaped from a hospital in Tooting has been found. Mark Ricketts went missing from Springfield Hospital on Saturday night.

Mark Ricketts was found by police on a bus in Lewisham early this morning. In 1993, Ricketts stabbed a stranger at a Tube station 20 times with a kitchen knife. His victim survived because the knife bent during the attack.