This is the moment a man allegedly used a sledgehammer to break into a train depot, before smashing walls, windows, toilets and computers.

A signalling problem between Victoria and Clapham Junction is causing delays that Network Rail says could last until the end of services.

A man who was left fighting for his life is now in a stable condition in hospital after falling from building site in central London.

A cyclist killed in a collision with a lorry in central London has been named.

French-born mother-of-two Claire Hitier-Abadie, 36, died in an accident with a lorry at a busy junction in Victoria during yesterday morning's rush-hour.

It was the fourth cyclist death in London so far this year, with lorries being involved in all of the incidents.

Mrs Hitier-Abadie worked in Grimsby for six years before returning to Paris in 2008. She moved from Paris to London last year with her husband Pierre, who works for Total Gas and Power at Canary Wharf in London's Docklands.

A colleague of Mr Abadie wrote on Twitter last night:

Absolutely devastated. My colleague's wife was killed while cycle commuting this morning, crushed by a lorry.

The boss came over to tell us as we all work on an open floor. It's awful at work. Who does her husband hug and cry with?

British Transport Police have released a CCTV video of a man they want to speak to about damage to a gate at Victoria station in London.

Shortly after 2am on Thursday 20th June, the same day England played Ukraine in the World Cup, a man tried to enter the station, but was told it was closed for cleaning.

After he was refused entry, the man managed to force his way into the station by pulling the gates out of the ground and bending them.

We believe the man shown in the CCTV footage has important information about this incident, and urge anyone who knows who he is to contact us.

The unusual nesting place was picked by the Queen bee, quickly followed by her devoted colony.

The colony of bees has now been safely moved across the road to Westminster Cathedral, where it will be looked after by beekeepers on top of the Catholic church's roof.

David Beamont, at the Victoria Business Improvement District said: "In Victoria there are over a dozen experienced beekeepers who have all been on an intense training course that focuses on the theory and practical training of urban beekeeping, successfully managing hives for nearly two years."

Ruth Duston, CEO of Victoria BID, said local businesses kept bees to boost the area's biodiversity, adding: "With a falling national bee population, the bees in Victoria play a key role in showing that London is a healthy, liveable city."

Tony Mann, a project manager at nearby John Lewis, who also happens to be a trained bee keeper, dashed over to the shop to help lead efforts to smoke the European honeybee colony out.

Tony Mann said: "We have either had a virgin Queen or an old Queen, she has left the nest and she has brought the warm and settled on the shop front. We are going to smoke them into a box and encourage them to stay there and we will remove them later today.

"They will go to whoever wants a hive. We need bees in London as much as we need them on the countryside. Bees are a keystone species. These are European honeybees."

Swarm of bees in Victoria Street ... saved or exterminated? http://t.co/qb0nbSEXm7 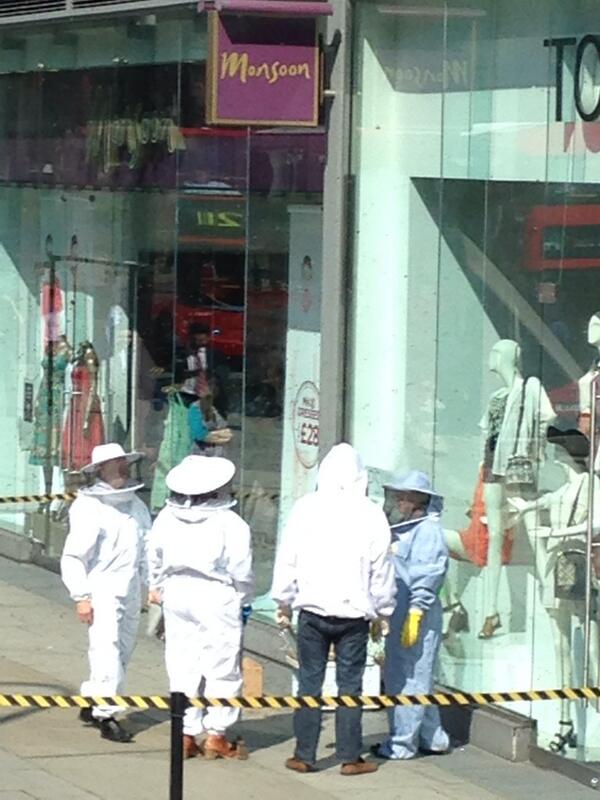