It's the sixth and final day of the Reclaim the Power Action camp set up in Balcombe. One thousand protesters joined anti-fracking campaigners in the West Sussex village. Two days of direct action saw 29 arrests including the Green MP for Brighton Pavilion, Caroline Lucas.

Sussex MP Francis Maude has released a statement following the protests outside his office yesterday.

He said: "I'm sorry that the genuine concerns and peaceful protests of Balcombe residents have been drowned out by illegal direct action by organisations who have no direct interest in the locality. "

My constituents in Balcombe are entitled to have their voices heard and their concerns addressed by the regulators. The company also have a right to carry out an activity which has been subjected to the full rigour of regulatory scrutiny. As for the demonstration at Gough House, this was one of the most pointless exercises I have come across. The only effect was to cause distress and hassle to our hardworking dedicated team, and to waste even more police time and precious resources."

Anti-fracking protesters were surrounded by police today as they linked arms in front of a lorry making its way to the gates of the Cuadrilla site in Balcombe, West Sussex.

The protest has so far remained peaceful, despite an earlier arrest of a woman.

Anti-fracking campaign group No Dash For Gas said they have no plans for a second day of action, although groups of people may protest outside the drilling site in Balcombe, West Sussex.

Today we are not taking action.

We are having meetings and deciding what to do next. But we will be coming back, it is not a sprint, it's a marathon.

– Ewa Jasiewicz, No Dash For Gas

Sussex Police has made an arrest during anti-fracking protests in Balcombe, West Sussex.

Officers have arrested a female in #Balcombe this morning for assaulting a police officer during yesterday's demonstrations.

Protesters have turned out for a second day of direct action at the drilling site in Balcombe, West Sussex, demonstrating against fracking.

Green Party MP Caroline Lucas was among more than 30 people arrested when anti-fracking campaigners staged a series of protests around the country on Monday.

One lorry has already entered the site at Balcombe in West Sussex, with demonstrators marching in front as it made its way down the road.

Sussex Police has responded to campaign group Frack Off, after it posted a picture of police dressed in riot gear at the drilling site in Balcombe, West Sussex. 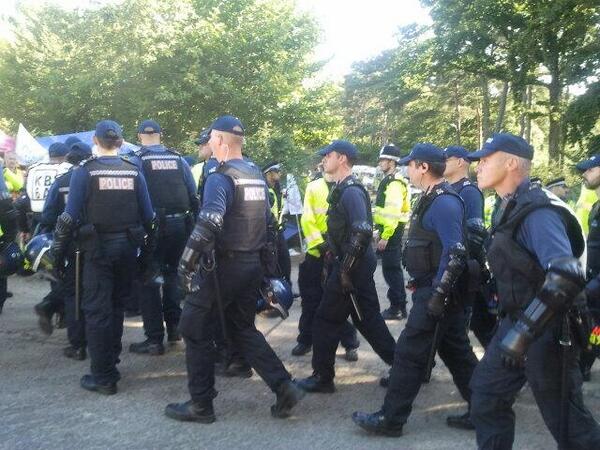 @frack_off As we have stated previously, our officers must be ready for any potential incident at the site.