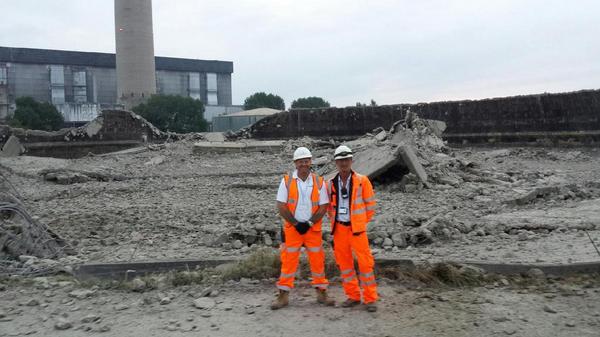 Mark Coleman, managing director of the specialist demolition firm Coleman and Company, also said it had been a job well done. He then thanked all the locals and hoped everyone enjoyed it.

Alan Robinson, Chief Commercial Officer at RWE, describes the demolition of Didcot A as a 'success'.

ITV Meridian has been out and about throughout the night speaking to you about your thoughts on the demolition of the iconic landmark, that was the power station at Didcot A. Here are a few snapshots of what you've told us.

Didcot Power Station no more,growing up outside Didcot always knew you were nearly home when you saw the Towers #SadTimes #DidcotDemolition

@colemanandco can I press the button when it's time for didcot b to go?

Local residents from Didcot have been posting there perspective on the power station demolition to YouTube and other social media sites. This view from Danielle Perry's page.

The big bang came at 5 am this morning when more than 40 years of Oxfordshire history came crashing down in a cloud of smoke. This shot by the ITV Meridian crew covering the event.

In a cloud of smoke and with a thunderous blast three historic towers were demolished today after dominating the Thames Valley's skyline for more than four decades.

The three southern towers of Didcot A power station in Oxfordshire were brought down by nearly 400lbs (180kg) of explosives in a matter of seconds. Hundreds of local residents were up all night to get the best vantage point to see the towers come tumbling down

The decision to demolish the towers in the early hours of the morning angered some locals, with a petition to change the timing gaining more than 3,000 signatures. Didcot town council had also expressed its disappointment but npower said the timeslot between 3am and 5am had been chosen for safety reasons, taking into account the risk of people getting too close to the explosion, and the impact of the dust cloud on local roads and a nearby rail line.

Warning sirens were sounded 15 and then 10 minutes before the explosion at 5am. During the build-up to the explosion #DidcotDemolition was trending on Twitter, and one Oxfordshire resident said: "This has gotta be Didcot's most momentous occasion since we won the FA vase".

The coal-fired power station ceased generating in March last year after dominating the skyline around the town since 1970, with the neighbouring gas-fired Didcot B continuing. The towers' appearance was not universally appreciated with many people finding them an eyesore. Whtaever your point of view, the journey along the A34 will never look the same.

The long wait continued through the night for the demolition of the Didcot cooling towers. People gathered since the early hours to catch a glimpse of three of the towers as they came crashing down.

Didcot Power Station has provided electricity to nearby homes for 40 years. But the coal-fired towers, forming part of the complex, were forced to shut down when new European rules over greenhouse gases came into force two years ago. The plant will be removed in stages with the southern cooling towers getting the first blast. The rest of it will go by 2016. Our reporter Asana Greenstreet has been talking to resident Kathleen Essex, who says the view has become part of her everyday life.