The owner of a lucky black cat - saved after she was found wedged into a two inch gap between two buildings - has spoken of her rescue.

Jon Harper discovered little Pheobe pinned between his house and garage in Hassocks. Firefighters were forced to cut a hole into a wall to get her out.

A curious cat called Phoebe had an unfortunate experience after becoming wedged in a gap between her owners' home and the family garage.

With the UK being battered by gales and stormy weather, it’s also raining cats and mogs at Battersea Dogs & Cats Home. The rescue centre has seen a whirlwind of cats and kittens being dumped in boxes and abandoned by their owners.

Most recently, a litter of four nine-week old kittens were found dumped in a black bag and brought into Battersea where staff named them Monsoon, Typhoon, Hurricane and Blizzard to reflect the weather conditions outside.

In addition to the site in South West London, the Home also has two other centres based at Old Windsor, Berkshire and Brands Hatch, Kent.

Honey, a cat from South Ockendon in Essex, has been selected as a finalist in a national competition run by a vet charity. The PDSA Pet Survivor Awards recognise the UK’s most incredible tales of pet survival.

The nine-year-old tabby survived being blasted in the face with a large metal ball bearing and is now up against five other pets for the coveted title of PDSA Pet Survivor 2015.

The competition recognises the pets’ incredible survival spirit, the love and devotion of their owners and the skill and dedication of the veterinary teams who helped to save their lives.

The winner will be decided by a public vote.

He's provided a loving home for thousands of unwanted cats for the last 15 years. But now a charity worker is urgently seeking help after he was diagnosed with lung cancer.

Ron Ayres runs the rescue centre from his rented home in Brighton and cares for up 250 cats each year. Today he said he fears for the future, and the animals, unless new premises can be found.

A family of ginger cats have been abandoned in a cat carrier next to sewage works in Dorset.

A mother cat and two four-month old kittens were found by the roadside on a lane that leads up to Sherborne’s household recycling centre this week.

The cats were found to be crawling with fleas and are now being cared for by the RSPCA.

Anyone with any further information about this incident can contact the RSPCA on 0300 123 8018.

We understand that sometimes people can face unexpected difficulties in life and this can mean a crisis when it comes to their pets but there are organisations out there that can help when times get tough and there is no excuse to dump any animal in this way. People need to be aware that not only are incidents such as this unthinking and callous but they are also a criminal offence.

The kittens were crying to be fed, underweight and cold. Happy Cat Rescue at Bordon took the animals in. They have been hand-reared for the past six weeks - bottle fed every two hours. One of the kittens died, but the others are now said to be 'flourishing'.

Here's a startling fact. A single female cat can become parent, grandparent, and great-grandparent to up to 20 thousand descendants in just five years. Yes, you read that right. Twenty thousand cats.

And that's why animal charities are becoming over-run and are calling for drastic solutions. Cat Chat - the Kent-based charity - wants more vets to offer neutering or spaying for free, or at least at low cost.

David Johns has been to one cat rescue centre to see the extent of the problem.

Can't help but tweet another pic of "Enchanted" and her two-week old kittens at @bdch Brands Hatch http://t.co/8knpQT4la6 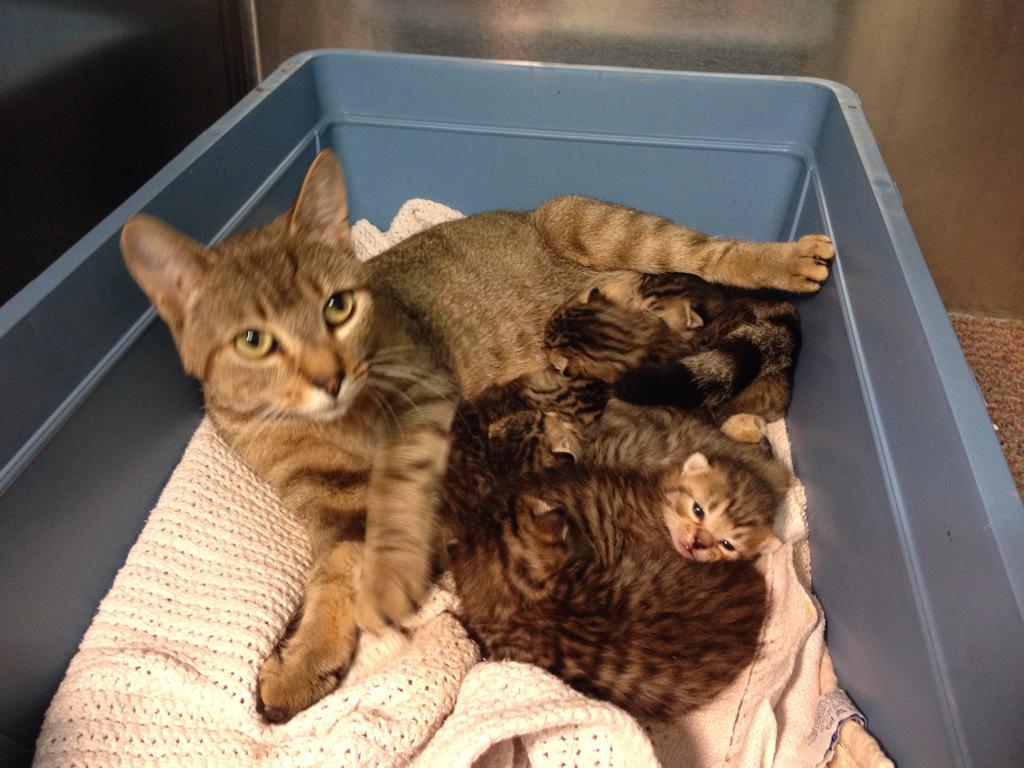 A single female cat can become parent, grandparent, great-grandparent and so on for thousands of descendants in just five years.

And that's why animal charities are becoming overrun with them, and are calling for drastic solutions. Cat Chat - the Kent-based charity - wants more vets to offer neutering or spaying for free.... or at least at low cost.

We will have an item from David Johns this afternoon.