Kent Fire & Rescue Service have attended a fire at a garden in Great Chart near Ashford.

Twenty-two families are in temporary accommodation after a fire tore through a block of flats in Snodland near Maidstone.

The blaze broke out at the Holborough Lakes development at the weekend. Fortunately no one was seriously injured but many homeowners are now trying to rebuild their lives - after being left with nothing.

Firefighters in Kent have spent the day tackling a large blaze at a complex of flats in Snodland.

Dozens of families had to be evacuated at around 7am this morning. It's thought the fire may have begun on a third floor balcony.

Two people have been taken to hospital after a fire at an apartment block in Snodland, Kent. The fire service were called to the scene at about 6.48am - more than one hundred firefighters were deployed along with fifteen fire engines and other equipment. Some residents say their properties have bee destroyed and they have been left with nothing.

The complex of 22 flats in Lambe Close at Holborough Lakes was evacuated, while Manley Boulevard was closed from the entrance to the estate to the junction with the neighbouring A228.

Kent Police and SECAmb ambulance service were also called to the scene. Firefighters remain at the scene. Kent Fire & Rescue Service say they are working with local authorities and Berkley Homes which is the managing agent for the properties, to help provide support and information to people who have been affected. Temporary accommodation is also being provided.

The emergency services believe that everyone has been accounted for. A rest centre is in place for residents. The British Red Cross has also sent a team and vehicle to help with the situation. It is not yet known what caused the fire. The two people taken to hospital, were given treatment as a precautionary measure.

(The video is from Matthew Smith.)

Fifteen fire engines are currently tackling a major blaze at a three storey block of flats in Kent.

The cause of the fire in Pollyfield Close, Snodland near Maidstone is not yet known. 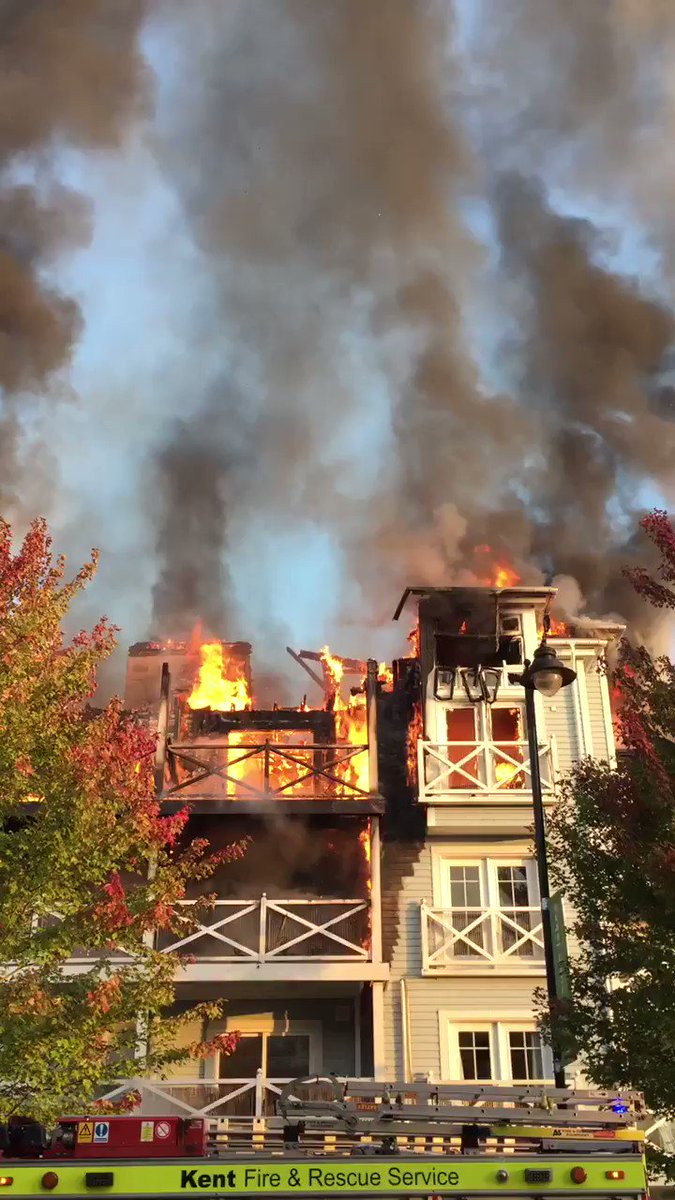 Kent Fire & Rescue Service spent much of last night tackling a blaze at a derelict leisure centre in Northfleet.

They were called to the building on Nelson Road at 6.40pm. Neighbouring residents were advised to close their windows and doors because of all the smoke in the area. About fifty homes in the immediate vicinity of the fire were evacuated with people being taken to the nearby Cignet Leisure Centre.

The police and ambulance crews were deployed to the incident. Kent Police said there were no reports of any injuries. Staff from the local authority and the Kent Resilience Team were also there to help the people who had to leave their homes.

The fire was brought under control by 9.30pm and crews remained at the site to damp down the scene.

A lorry has hit a Grade II listed building in a village in Kent. The incident happened after a crash involving two vehicles at the junction of Goudhurst Road and Maidstone Road in the village of Horsmonden near Tunbridge Wells. The emergency services say there are no reported injuries.

Crews from Kent Fire & Rescue Service are working to make the scene safe. Building engineers are expected to arrive later today in order to assess the damage at the building which houses an estate agents.

A telephone box and a telegraph pole have also been damaged. The road has been closed in both directions for recovery work and safety inspections to take place. Motorists are being advised to use alternative routes.

A woman and her dog have been cut free from a car by Kent Fire & Rescue Service after a crash involving another vehicle on Sandling Road in Hythe in Kent this morning.

The woman was airlifted to hospital by air ambulance. The dog was given oxygen therapy and handed over to the care of a local vet.

A man has been photographed clinging onto the back of a fire engine as it was driven through Sittingbourne in Kent just before 11 o'clock last night.

An eyewitness said the man, who appeared to be in his twenties, had jumped on near the High Street - and then back off as the vehicle approached the town's main fire station. The dangerous stunt, which could have caused an accident, was carried out in the dark, in moving traffic.

Kent Fire and Rescue Service confirmed that the incident had happened while a crew was returning from a call out in the town centre. A spokesperson said the firefighters on the engine were unaware of the man's presence until they approached the fire station and he ran off.

No-one was injured during the fire in a yard at the Westwood Cross shopping centre in Broadstairs. The fire was in a cardboard compactor. Nearby shops were evacuated as a precautionary measure. Firefighters put out out the fire with half an hour of the alarm being raised this afternoon.