Anyone flying to Paris in France today is being advised to check before travelling. Flights have been suspended at Paris Orly Airport after a man who tried to seize a soldier's gun there was shot dead by police.

Flights between Southampton Airport and Paris Orly Airport have been suspended. A spokesperson said that one inbound flight heading to the UK has been delayed.

Some British Airways flights from Heathrow Airport to Paris Orly Airport have also been cancelled.

A number of flights from various airports have been redirected to Paris Charles De Gaulle Airport. Do check before you travel.

"We are doing all we can to assist our customers while the airport authorities at Paris Orly prepare for the airport to re-open. ​

The safety and security of our customers and colleagues is always our priority."

Flags were flown at half mast -and people across the South fell silent at eleven o'clock this morning - a tribute to the victims of theParis attacks - and an overwhelming show of solidarity in the face of terrorism. Richard Slee reports.

He was responding to the Paris terror attacks.

His comments come after the Kent Police Commissioner, Ann Barnes, called on the Government to delay its cuts to the police budgets.

Flags will fly at half-mast on Whitehall government buildings and the UK will observe a minute's silence at 11 o'clock this morning.

The silence will be held across Europe in remembrance of those who lost their lives in the series of terrorist attacks in Paris.

The terrorist incidents, which took place on Friday night claimed at least 129 lives and hundreds of casualties.

Members of the public who have been directly affected by the incidents in Paris, or who are concerned about family members and friends who may be directly affected can call the Foreign and Commonwealth Office on 020 7008 0000.

People across the region have been showing their sympathy and solidarity with the victims and their families. Today - in Oxford hundreds gathered for a march of remembrance. Kate Bunkall was there.

A group of sixth formers have returned home from Paris after they were caught up in the Paris terrorist attacks.

The students arrived at the Thomas Hardye School in Dorchester on Sunday.

They were in a restaurant in central Paris when the attacks began. When the all-clear came they walked three miles back to their hotel because the Metro was closed.

Parents praised the teachers for keeping them informed.

We spoke to student Zoe Horne and her mother Jane Horne

Services of solidarity have taken place in churches across the south, as the world comes to terms with the tragic events in Paris.

Prayers have been said at Canterbury Cathedral for the victims of the terrorist atrocities.

The Very Reverend Dr Robert Willis, Dean of Canterbury Cathedral, spoke to ITV Meridian of his shock and sadness.

Hundreds of people have gathered in Oxford to remember the victims of the Paris terror attacks.

They marched through the streets of the city from the Radcliffe Camera to the Maison Francaise, where a vigil was held.

Around 300 people took part in the event, to show solidarity with the people of France. Many of those present were French themselves.

We will have a full report in our evening news tonight at 7.55

Students at Southampton University have held a minute's silence for those caught up in the terrorist attacks in Paris. 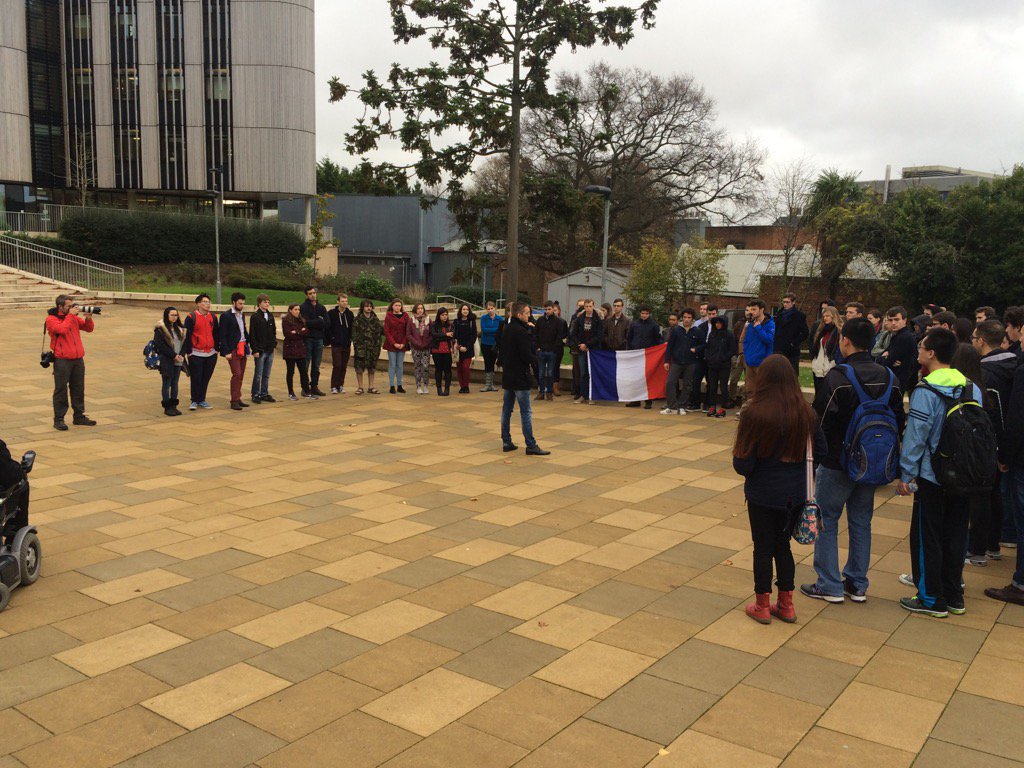 A group of sixth form students from a school in Dorset are due to return home from Paris shortly, after getting caught up in the terrorist atrocities.

The art and photography students from Thomas Hardye School in Dorchester were on a weekend trip to the French capital.

It's thought they were in a restaurant at the time of the attacks, and were aware of the enormity of the situation.

But the youngsters and their teachers were unharmed.

However, it's reported they had to walk three miles back to their hotel after the attacks because the transport system had closed down.