The Southampton liner the Queen Mary 2 arrived back into port today after her 90 million pounds re-fit. It was the biggest upgrade of a cruise ship in history and has taken 2,500 workers in Germany 25 days to complete.

She has been re-painted and there are new cabins for people and pets. The famous ship is only home in Hampshire for one day before she heads to New York. Our reporter Mike Pearse managed to get on board to have a look around before she sets sail.

Southampton has welcomed the liner the Queen Mary 2 back into port today after her £90m re-fit.

It's the biggest upgrade in history and has taken 2500 workers 25 days.

She's been re-painted and there are new cabins for people and pets. Exhausts have also been fitted to reduce emissions.

After a day of celebrations - the famous ship will leave Southampton for New York tonight.

Southampton liner Queen Mary 2 is undergoing the biggest and most expensive ever refurbishment of a passenger ship.

Tens of millions of pounds is being spent on the liner launched by the Queen in the city 12 years ago. She's in Hamburg for almost a month to allow for the upgrade and will return to major celebrations in the port later in the month when thousands are expected to line the banks of the Solent.

Our Transport Correspondent Mike Pearse is in Germany to look at how work is progressing and how they plan to compete it on time.

He spoke to Angus Struthers of Cunard and Capt Kevin Oprey, Master of the ship.

They started work at the age of fourteen and were paid just over one pound a week. For hundreds of teenagers from the south being a Bell Boy on the Southampton based cruise liners was a dream job taking them all over the world. Well today the role they played looking after passengers on the great ships like the Queen Mary and Elizabeth was celebrated with one of the oldest surviving Bell Boys taking a trip down memory lane on Queen Mary 2. Mike Pearse reports.

Back on board 70 years after Frank Biggs from Southampton started work as a bell boy aged 15. His duties were to look after passengers, walk dogs, carry bags and deliver papers and telegrams. Today he was on Queen Mary 2 where a photo of him dating back to 1945 has been displayed.

Southampton will welcome home the Queen Mary Two today as she brings to the city a special delivery.

The liner has brought with her from Belgium a sack of earth collected from World War One cemeteries.

It will form part of a national memorial to the Great War in London.

The Duke of Edinburgh is helping to celebrate the 10th anniversary of the luxury liner, Queen Mary II in Southampton. The ship sailed into port, along with The Queen Victoria and The Queen Mary, making the city the only place in the world to host all Three Queens, three times.

The Duke of Edinburgh will visit Cunard's Queen Mary II later as part of the ship's 10th anniversary celebrations. The ship sailed into her home port of Southampton earlier this morning.

She was named by the Queen and the Duke in 2004. Since then the vessel has undertaken more than four hundred voyages. 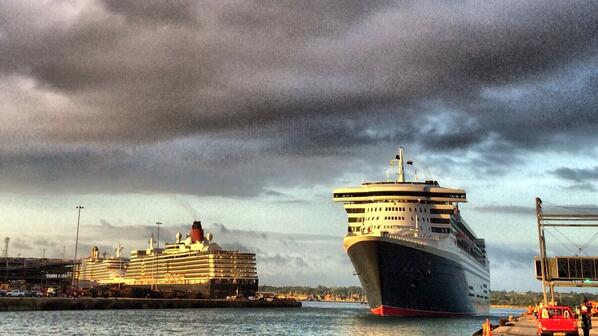 The Duke of Edinburgh will visit Cunard's Queen Mary 2 later as part of the ship's tenth anniversary celebrations.

The Ship was named by the Queen and the Duke at Southampton in 2004. Since then the vessel has undertaken more than four hundred voyages and carried more than a million guests.

Cunard's Chief Executive Officer, David Dingle said, "We are delighted and honoured that His Royal Highness has agreed to visit Queen Mary 2 and take part in our flagship's 10th anniversary.

"Having been present at her entry into service. For all those involved, this will surely be another memorable occasion in Cunard's long history".