Two vehicles have been involved in a collision on the M3 Northbound between J7 A30 (Basingstoke) and J6 A30 / A339 (Basingstoke). There is slow traffic, a speed restriction of 50 mph and one lane (lane three of three) is closed. 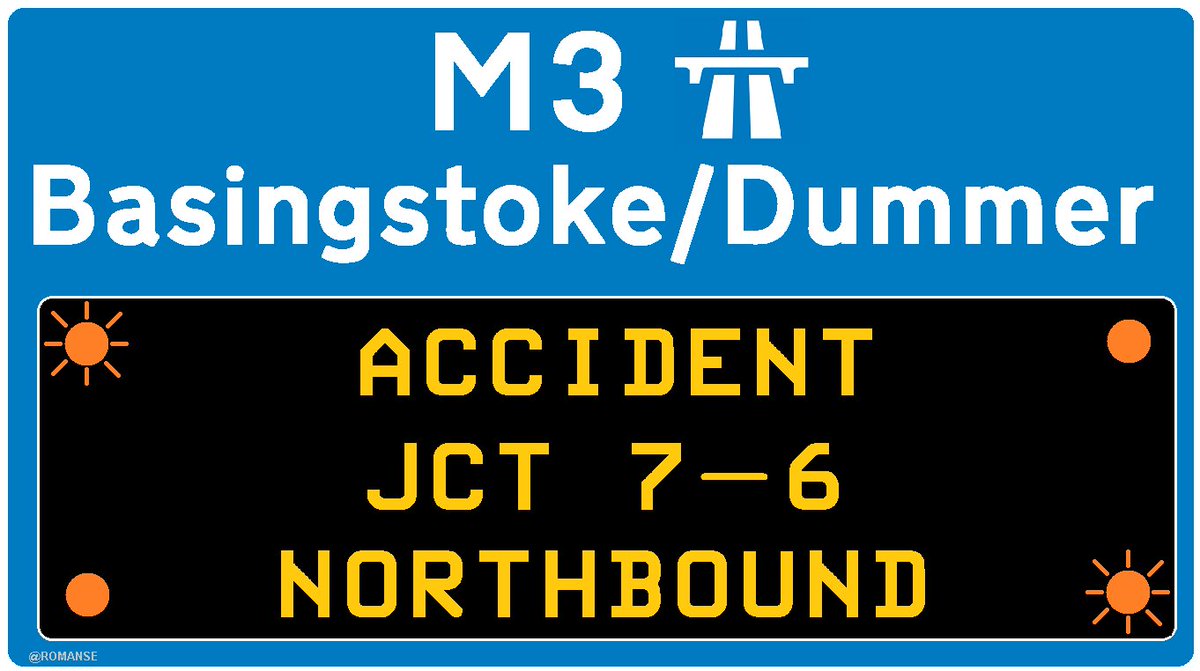 A car has caught fire on the M3 in Hampshire after overturning.

There is queueing traffic on the M3 northbound at junction 8 for the A30 / A303 at Andover. Congestion on the M3 back to Winchester Services. All lanes have been reopened, but there are still delays. The A303 towards the J8/M3 remains closed.

All lanes have been reopened at Junction 8 southbound, although lane 2 of 2 was closed to assist the emergency services dealing with the vehicle fire on the opposite side.

One lane is blocked and there is slow traffic after and accident on the M3 Southbound at J4 A331 / A331 Blackwater Valley Route for Camberley. Lane one of three is blocked.

Two lanes are closed and there's very slow moving traffic after an accident involving a lorry and two cars on the M3 Southbound between J3 A322 (Lightwater / Bagshot) and J4 A331 Blackwater Valley Route (Camberley). Lanes two and three are blocked.

Resurfacing work on the M3 Southbound at J4A A327 (Farnborough) means there are two lanes closed. That has caused queueing traffic with long delays. There is congestion from the M3 to J2 M25. The disruption is expected to the end of the day.

It's been 19 months of tailbacks, speed cameras and 50 mile per hour limits. And now the misery on the M3 is to last even longer.

A six-month delay on work to expand the carriageway means there's at least another year of road works.

The scheme is to create a so-called Smart Motorway, 16 miles long in each direction from the M25 to just before Fleet Services where the hard shoulder is being turned into a running lane.

The cost is £158 million. Work was due to end in December this year but now will go on until the end of June 2017.

But some commuters have simply had enough - as our Transport Correspondent Mike Pearse explains.

Police have named a lorry driver who died following a collision on the M3 at Eastleigh on Saturday. He was Antony Welling, 60, of Abbots Langley in Hertfordshire.

Mr Welling was driving a Mercedes lorry on the M3 southbound around 4.50pm, when it collided with a motorway barrier at junction 13.

He was taken by ambulance to Southampton General Hospital where he later died. His passenger, a 45-year-old man from Essex, was also taken to hospital with serious but not life threatening injuries.

Police are continuing their investigation and would like to hear from anyone who witnessed the collision.

Anyone with information is asked to contact Temporary Sergeant Dan Golding at the Totton Roads Policing unit, quoting Operation Magnolite, on 101.

A man has died after a road traffic accident on the M3 on Saturday 4th January.

A 7.5 tonne Mercedes box lorry was involved in the accident at junction 13 of the M3 at Eastleigh. It happened just before 5pm. The victim was a sixty-year-old man.

Hampshire Police are appealing for witnesses. Anyone with information can contact Sergeant Dan Golding at the Totton Road Policing Unit on 101, quoting Op Magnolite.

Video: Sangeeta left Whiteley after the programme, and has spent all evening stuck on the M3 because of this afternoon's crash. She has sent a hands-free report.