An unexploded Second World War bomb which was dredged up from the bottom of Portsmouth Harbour this morning has been safely detonated at sea.

The entrance to Portsmouth Harbour was closed until around 7:30am this morning after the discovery of the German SC250 bomb.

It was found at the head of a barge dredging the harbour which is part of ongoing preparations taking place for the arrival of the Royal Navy's new 65,000 tonne aircraft carrier.

Divers from the Southern Diving Unit 2 towed the bomb away from the harbour, lowered it to the seabed and planted explosive charges to begin a controlled detonation.

Shortly after 11am today it was destroyed in a plume of smoke and spray.

The WW2 bomb which was found at Portsmouth Harbour earlier today has been safely detonated at sea by the Royal Navy.

It was detonated off the Isle of Wight after being discovered during dredging work for the Royal Navy's new aircraft carriers.

Bomb from #Portsmouth Harbour safely detonated at sea off the Isle of Wight by @royalnavy divers - more to follow https://t.co/o1wabWDjCR 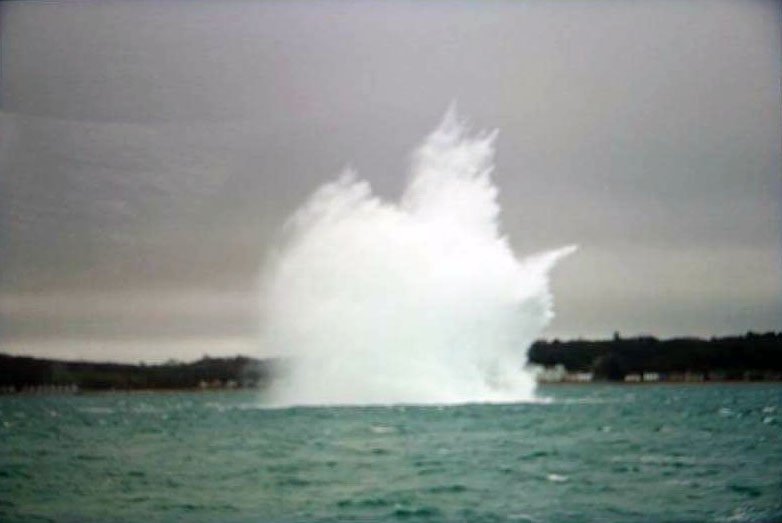 Restrictions have been lifted after a 500lb bomb discovered during dredging work for the Royal Navy's new aircraft carriers was towed to a safe location to be detonated.

Trains and ferries were cancelled and residents advised to stay in their homes following the discovery of the German Second World War bomb in Portsmouth Harbour.

Several pieces of unexploded ordnance have been found since work started to deepen the harbour channel to enable the next generation of carriers to access the Navy base.

Public transport links are now returning to normal. Portsmouth Harbour and Gunwharf Quays are also now open to the public.

"As always, the Royal Navy stands ready to respond to these call-outs and keep people safe.

"Despite being old, these devices can pose a very serious threat."

The unexploded ordnance found in Portsmouth Harbour this morning is now being moved to a safe place by The Royal Navy Ordnance Disposal and our police operation has been stood down.

Public transport links will be returning to normal. However be mindful that marine travel and ferries may still be affected so check before you begin your journey.

Portsmouth Harbour and Gunwharf Quays are now open to the public.

Wightlink ferries from Portsmouth are running again after sailings were suspended following the discovery of unexploded ordnance in the harbour.

The exclusion zone has been lifted, however it will take some hours before services are back to normal.

The St Clare car ferry is making her way to Portsmouth from Fishbourne and St Faith is preparing to pick up vehicles and passengers at Portsmouth.

The bomb squad will detonate an "unexploded ordnance" in Portsmouth Harbour, found during preparations for the arrival of a new Royal Navy aircraft carrier.

Hampshire Constabulary said the device was found during a dredging operation. It comes five days after a wartime device was destroyed by bomb disposal experts at the harbour.

Divers from the Royal Navy’s Portsmouth-based Southern Diving Unit 2 are on the scene.

They are working alongside the Ministry of Defence Police, Portsmouth City Council, Hampshire Constabulary, the Queen’s Harbour Master and other organisations to ensure public safety and minimise disruption.

The entrance to Portsmouth Harbour is currently closed until the Royal Navy bomb disposal team can safely dispose of the ordnance.

"Unexploded ordnance has been located during an ongoing dredging operation to prepare for new Royal Navy aircraft carriers in Portsmouth Harbour.

"Our priority is to ensure public safety and minimise community disruption while the ordnance is detonated by the Royal Navy Explosive Ordnance Disposal.

"Further details will be communicated to any residents or visitors to the city affected by this operation."

#DisruptionSWT All lines are closed at Portsmouth Harbour. Services are being amended. Please see https://t.co/XHicm3sZCU for more