Could any of these items belong to you?

They were recovered from Yalding Canal in Kent in January and police believe they could have been taken during burglaries in Sussex in the months beforehand.

Among the muddy items are Nike sports bags, camera and jewellery boxes and a case bearing the inscription "To Ken from Rose, Keith and Sharon 15-3-61".

"Although these items do not appear to be of high value, they could be used to link the offender to burglaries so we need the public to tell us if they recognise anything that belongs to them."

Anyone with information about any of the items should email 101@sussex.pnn.police.uk quoting Operation Smart, call 101 or contact the independent charity Crimestoppers anonymously on 0800 555111.

An independent check is to be made on how the Environment Agency operated a flood barrier in Kent last winter. Residents of Yalding, near Maidstone, which was badly flooded over Christmas, were told about the plan at a meeting last night.

The EA is also promising more precise flood warning zones. But as David Johns reports, many local people were far from impressed with what they heard.

A man who attempted to rape a teenager in a Yalding car park has been sentenced to seven years in prison.

Gavin Jones drove a 14-year-old girl to an empty car park at Yalding Train Station in 2006, and threatened her with violence unless she removed her clothes.

Jones, 36, formerly of Abbey Wood, London was known to the victim and on 10 May, 2006 he arranged to drive her from a place she had been working to her home address.

He headed instead for the train station, telling his victim 'I'm going to scare you' as he drove to the car park. He locked all the doors and broke the victim's phone so she couldn't call the police, before attempting to rape her.

Jones threatened and terrified his victim to the extent that initially she too scared to report the offence. However, in May 2014 Kent Police received information linking him to the incident. Officers then approached the victim, who supported the police investigation.

Jones appeared at Maidstone Crown Court on 18 November having previously pleaded guilty to one charge of attempted rape. He was sentenced to 7 years in prison and placed on the sex offenders' register indefinitely.

"I am delighted with the sentence and would like to thank the victim who showed great courage in coming forward and assisting with our investigation. Jones has finally been brought to justice for an offence which occurred eight years ago and I would like to remind anyone who is a victim of a sexual assault that it doesn't matter how long ago an offence had occurred we will always investigate every single complaint."

"Violent crime on the railway is rare, but this was a truly horrific crime; a frightening experience for the victim. We will investigate any incidents of unwanted sexual behaviour reported to us. Our officers will do everything they can to catch offenders. I want to thank Kent Police for a thorough investigation that has concluded with the offender behind bars."

A man who attempted to rape a 14-year-old girl in the train station car park in Yalding car park has been jailed for seven years.

Gavin Jones drove the teenager to the empty car park in 2006, and threatened her with violence unless she removed her clothes.

The 36-year-old, who knew the victim through an accquaintance, told her "I'm going to scare you", before he locked all the doors and broke her phone, before attempting to rape her.

After pleading guilty to one charge of attempted rape he was sentenced to jail and placed on the sex offenders' register indefinitely.

Detective Sergeant Paddy Kerr, of British Transport Police, said: "Crime on the railway is rare, but this was a truly horrific crime; a frightening experience for the victim."

Many of them missed their Christmas dinner due to some of the worst flooding the South East has experienced in decades, but today Yalding villagers finally got to sit down to some festive fare.

Dozens enjoyed a specially-laid on lunch with turkey and all the trimmings, even though some residents have still not moved back into their homes four months on.

We speak to Yalding residents including parish council chairman Geraldine Brown and to James Walker of the Kent Messenger Group, which organised the event.

Dozens enjoyed a specially laid-on lunch with turkey and all the trimmings, even though some residents still haven't moved back into their homes

People living in Yalding who had their Christmas ruined by the floods will celebrate this weekend.

The KM and Mid Kent College have organised a special Christmas party for local residents.

Many families in the area were forced to evacuate their homes because of rising water levels earlier this year.

Firefighters were called out to help those living in a mobile home park to safety.

And some families became trapped in their homes at The Lees.

His Royal Highness, the Prince of Wales, and the Duchess of Cornwall, visited Kent today, to meet residents of the south-east's most flooded village. They were given a warm welcome by a small crowd of well-wishers.

A teenager has told how he persuaded Prince Charles to pose for a selfie with him today.

Joseph Wilson said friends dared him to take the cheeky snap during the Prince's visit to flood hit residents in Yalding in Kent.

The 17-year-old, who has previously posed for a selfie with Prime Minister David Cameron, said the prince was good humoured about it. 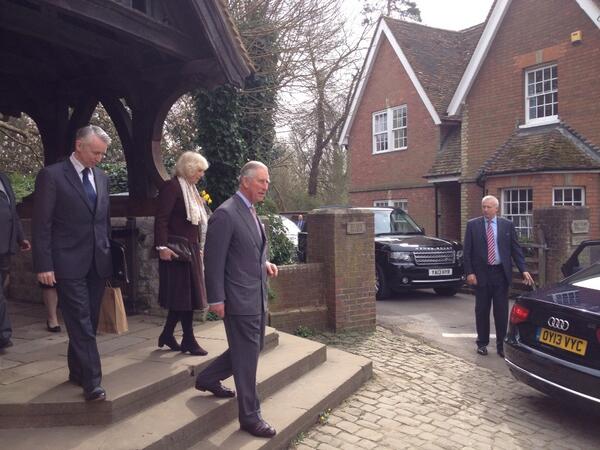